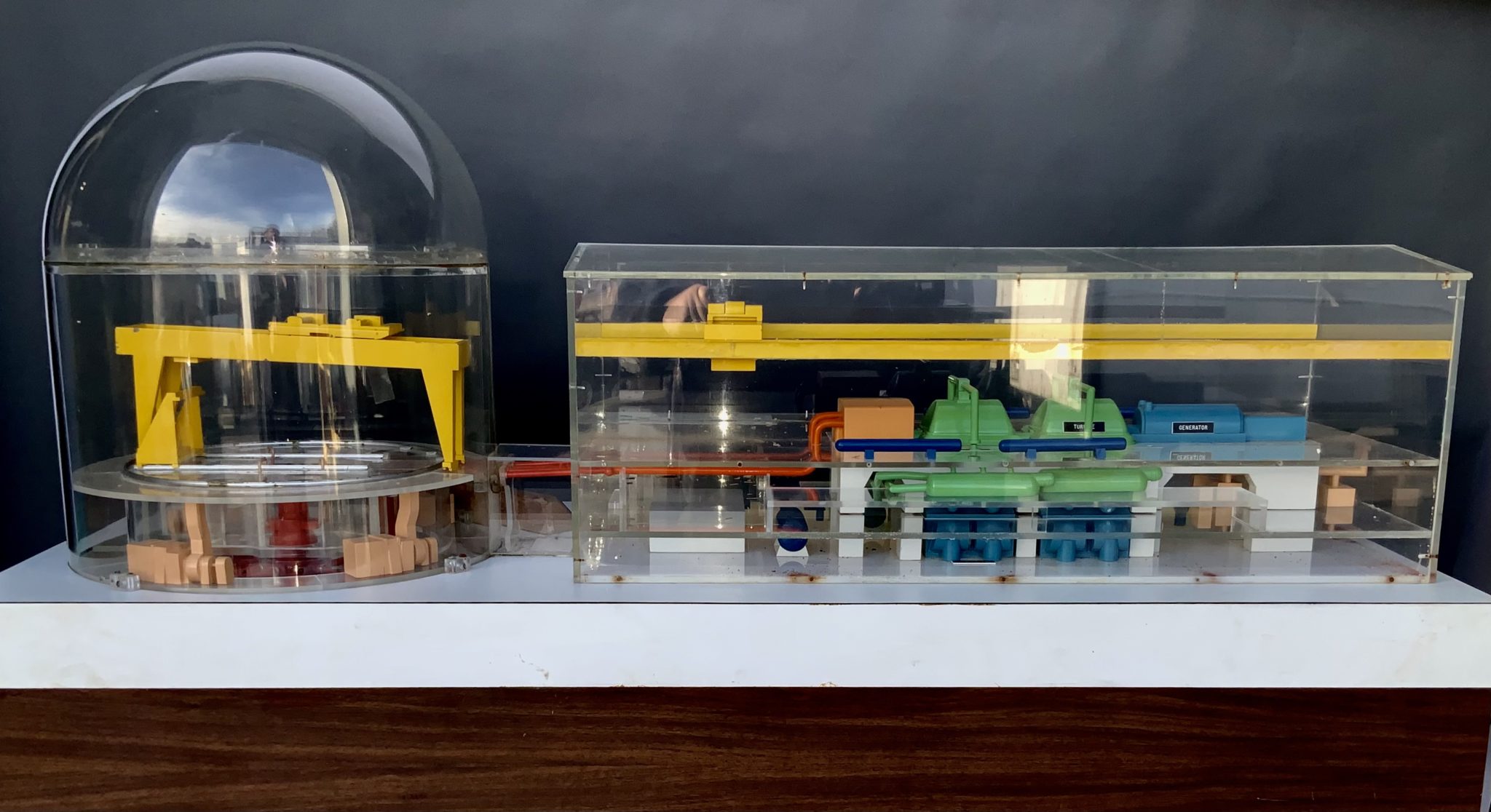 1966 EXTREMELY FINE WELL- EXECUTED EARLY MUSEUM QUALITY MODEL BY WESTINGHOUSE OF THE PROPOSED MAINE YANKEE ATOMIC POWER PLANT POWER TO BE LOCATED AT WISCASSET MAINE UNITED STATES. THIS MODEL WAS USED DURING INITIAL APPLICATION FOR LICENSING WITH THE NRC.

WE ARE AVAILABLE FOR QUESTIONS. THIS HAS BEEN IN ENVIRONMENTALLY CONTROLLED STORAGE FOR SEVERAL DECADES.

INCLUDING A DOMED REACTOR  WITH ROD ASSEMBLY, OVERHEAD GANTRY AND OTHER FINE DETAILS WITH SECOND SECTION WITH TURBINE, GENERATOR, CONDENSER AND MANY OTHER FINE DETAILS. PROFESSIONALLY BUILT FOR A SCIENCE MUSEUM DISPLAY, THE TURBINE BUILT BY WESTINGHOUSE WITH WESTINGHOUSE LOGO. THE MODEL IS ELECTRIFIED FOR LIGHTING PURPOSES (NOTE: WE HAVE NOT PLUGGED IN TO ASSESS LIGHTING OR MOVING PARTS, IN THAT CORD IS FRAYED AND NEEDS REPLACEMENT AS WELL AS NO PERMIT FROM N.R.C. PRESENT.)

THE REACTOR OF APPROXIMATELY 17″ DIAMETER MADE OF HEAVY PLEXIGLASS 22″ TALL WITH REMOVABLE TOP FOR ACCESS, THE GENERATOR AND CONDENSER BUILDING TWO-TIERED WITH THE BOTTOM SECTION 33″ X 18″ X 5″ WITH UPPER ROOF SECTION COMPLETE WITH INTERNAL GANTRY TAPERING TO PEAK 7″ X 14 1/2″; HEIGHT TO PEAK – 13″ , ALL MOUNTED ON A CUSTOM MUSEUM-BUILT PRESENTATION PLINTH 57″ X 21″ X 9 1/2. THIS IS AN EXCEPTIONAL OPPORTUNITY TO HAVE A NUCLEAR REACTOR MODEL IN YOUR LIVING ROOM, OFFICE OR SLEEPING QUARTERS. ESTIMATED WEIGHT 200LBS. (SEE PHOTO).

Maine Yankee Nuclear Power Plant was a nuclear power plant built at an 820-acre site on Bailey Peninsula of Wiscasset, Maine, in the United States. It operated from 1972 until 1996, when problems at the plant became too expensive to fix.[1] It was decommissioned and dismantled between 1997 and 2005, though some of the plant’s nuclear waste is still stored on site, pending final disposal.

The Maine Yankee Atomic Power Company formed in 1966 with plans for a pressurized water reactor in Wiscasset, Maine, and a 40-year operating license.

Initial opposition for constructing the plant was led by Citizens for Safe Power, the Audubon Naturalist Council, the Natural Resources Council of Maine, and Maine’s Governor Kenneth M. Curtis, in the form of a petition to the Atomic Energy Commission, asking for the suspension of the plants operating license due to the concern with environmental and safety issues.[4] The group failed to stop construction but succeeded in persuading the Nuclear Regulatory Commission to impose stricter environmental standards and monitoring. After the malfunction of the Three Mile Island power plant in Pennsylvania, citizens Raymond and Patricia Shadis of Wiscasset led a 1,000 people in a march to the capital of Maine to propose a statewide anti-nuclear petition.[4] The initiative to eliminate nuclear power in Maine was voted on several times between 1982 and 1987, but never passed.[4] Finally in 1987, after narrowly missing a vote to shut down the power plant, the Nuclear Regulatory Committee (NRC), decided to investigate the power plant for safety violations.[4]

A lengthy Nuclear Regulatory Commission investigation started in 1995, following allegations of safety problems at the plant. The NRC staff identified so many problems that Maine Yankee Atomic Power Co. decided “it would be too costly to correct these deficiences to the extent required by the NRC and decided to shut the plant down”.

The $500 million decommissioning process ran from 1997 to 2005.[5] In 2000, the first structures were gutted out by workers. In 2003, the reactor pressure vessel was shipped to Barnwell, South Carolina via barge. Finally, in 2004, the facility’s containment building was brought down by explosives.

As of 2010, questions remained about the final disposal of the plant’s nuclear waste, following the scrapping of the planned national depository.