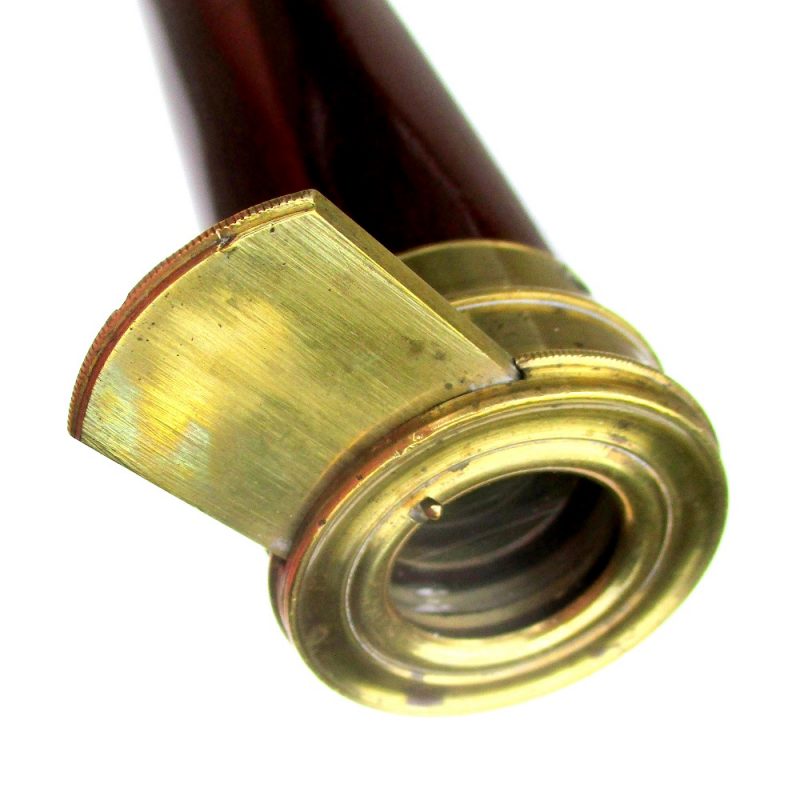 A 2-draw telescope by Della Torre, circa 1815, with objective triplet

For sale here is an elegant, narrow bodied, antique 2-draw telescope by Della Torre, working in around 1815 in London: it has a mahogany barrel and lens protectors at each end. This model is special, in having three separate lenses as a triplet making up the objective: and the retaining ring unscrews easily to show the lenses. The telescope is engraved 'Della Torre & Co, London', on the first draw. Fully open, the length is 19.5" (49cms), and closed it is 8.5" or 21cms. Maximum diameter is 36mm.

Offered for sale here is an antique telescope made by Della Torre, in Red Lion Square, London, in the decade around 1815. Anthony Della Torre was working as an Optician in London from 1805 to 1823: he was sometimes known as ‘de la Torre’. He was located at 12 Leigh Street, in Red Lion Square, from 1805-11, and 4 Leigh Street, Red Lion Square, from 1815-23. There’s not a lot more known, indeed Leigh Street has disappeared, but if the houses were actually the ones now on Red Lion Square, they were expensive addresses. Italian immigrants to London in the early 1800s were concentrated in this northern part of London. Amongst their number were various other instrument makers – such as Negretti, eventually founding Negretti and Zambra; and Martinelli, who made barometers.

The telescope is engraved on the first draw, “Della Torre & Co, London”. It is an elegant, narrow bodied, two draw telescope, with a deep red coloured mahogany barrel, and brass fittings and sliding lens protectors at each end. The screws that are present mostly look original: one on the objective carrier does look like a replacement. The telescope gives a nice image with an easy focus.

The unusual, nearly unique feature of this telescope is that the objective is a triple lens combination. The Crown glass convex lenses sandwich the flint glass concave lens (the central lens on the pic with the slight pinkish tint) are very clear of colour, with only the slightest green tint. All three are held in place in the brass objective assembly with a screw-in ring, which is much easier to deal with and dismantle, compared to a peened structure. The objective is small in diameter, with only 18mm of visible glass, within the total telescope OD of 37mm: this is reminiscent of much older Italian (and Dollond C18th) designs of telescope.

The size makes this telescope easy to carry, so it was possibly used on board ship by an officer on deck.

I first started using a telescope in the 60s, to identify aeroplanes arriving at Yeadon airport, in Yorkshire. Then I started to collect and restore vintage brass scopes in the 1990s. The collection boomed later, in the early days of the internet, rising to around 300 in number. I then made a lot of friends via the internet, advising them on how to identify, date or repair their scopes. At the age of 72 I need to disperse these wonderful bits of engineering history, because they still work today as well as they did 200+ years ago! That is the fascination....Some of my collection have already been sold to collectors spread around, in the UK, USA, Ireland, Israel, France and Germany. Several have been returned to the UK descendants of the people who made them, or relations of their previous owners, because they found the stories on my website. Now the collection needs to be dispersed more systematically, so therefore Fleaglass.com is the place to find the real enthusiasts. The first dozen or so telescopes will be added shortly, so please visit this site again soon! Alternatively, if you are looking for a specific telescope, tell me, as maybe I have one!
Nick Denbow, based in Alresford, Hampshire: contact via email on nick@nickdenbow.com