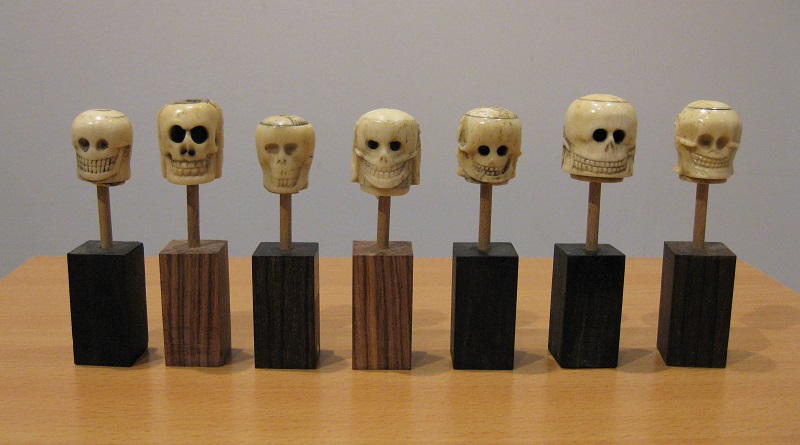 A collection of 7 double-sided memento mori in bone and ivory, 16th-17th centuries

This small ivory and bone carving conveys one of the most profound themes of the late Middle Ages, serving as a memento mori, a reminder of the transitory nature of life and the inevitability of death.

The repetition of prayers and liturgical texts was an important part of late medieval devotion. The rosary, which became popular by the fourteenth century, is a collection of these texts devoted particularly to the Virgin Mary. Strings of beads to assist those saying the long sequences of recitations also came to be known as rosaries. Such carvings as this one are pierced vertically for suspension, consistent with their original function as pendants to rosaries or chaplets (shorter strings of devotional beads).

Dating from the late Middle Ages through the seventeenth century, there are many surviving memento mori pendants from rosaries. Here, they are double-sided, the pendants are decorated with a skull (here with a charming, naive and astonishing smile) on one side and a youthful face (here christ and the crown of thorns) on the other side.

They are made in bone and ivory.