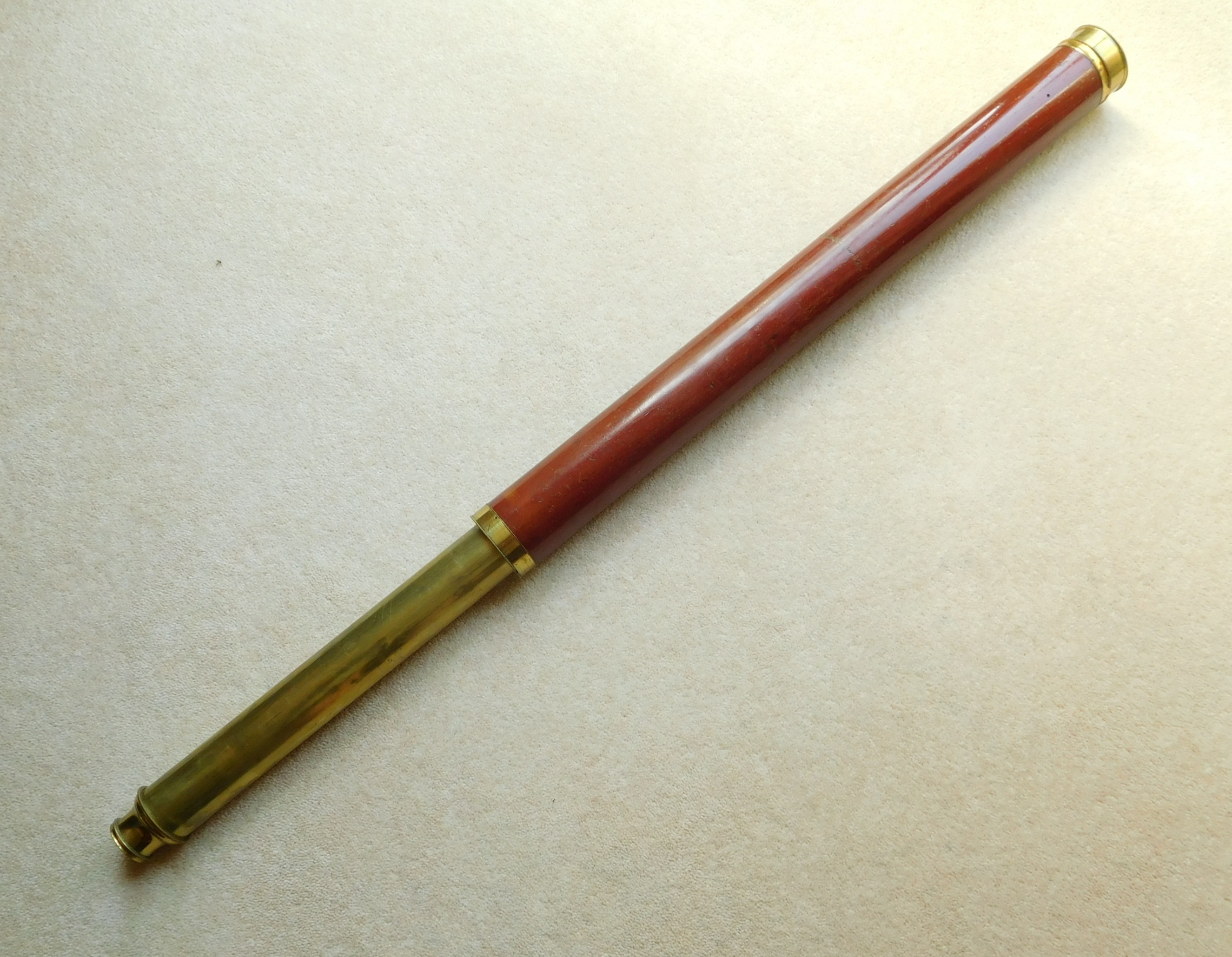 Offered for Sale is a very good example of an Antique, mid 18th Century Achromatic, Refracting, Terrestrial telescope, signed by ..... Jesse Ramsden. It has a 1-3/4 inch Objective. Ramsden was probably one of the greatest instrument makers of the 18th Century. C 1785

Offered for Sale is a very good example of an Antique, mid 18th Century Achromatic telescope, signed by one of the greatest instrument makers of the 18th Century ….. Jesse Ramsden. Born 6th October 1735, and died 5th November 1800. He went to London in 1758, and after serving an apprentiship for 4 years, he started business on his own account, and very quickly gained a great reputation for designing and making instruments, specializing in high quality dividing engines, dividing circles, telescopes, etc etc. Among his many inventions, was the Achromatic eyepiece, now named after him. He was elected to the Royal Society in 1776, and in 1791 he completed the Shuckburgh telescope, and equitorial mounted refractor telescope, and in 1785.he made a new large theodolite for General William Roy of the Royal Engineers. Many future great instrument makers served as his apprentice, including, Matthew Berge, Ross, Jones etc. etc. His instruments are highly regarded, and are now very difficult to find, especially in good condition. Matthew Berge in fact continued the business from 1800, and completed many instruments that were incompleted by Ramsden . [ signed “Berge London Late Ramsden”]. This example is an Achromatic Terrestrial Telescope, with a aperture of 1-3/4″, measuring 25″ closed, and 38″ extended. It is of brass construction, with a wood bound main body [ mahogany, or possibly a fruit wood], with a single pull extension. There is a brass end cap to the objective, and a sliding cover to the eyepiece. The important signature: “Ramsden London “ is very clearly inscribed to the brass work of the pull draw. All brass work is in excellent condition, especially considering the age of this instrument, with no dents, and minor areas of stain. The woodwork, apart from minor scuffs, is also very good. The optics are crisp and clear.  There is a small wooden display stand included. ….Please Note that there is a later, quality, fitted wooden case available, made in the 20th Century, which I would be willing to sell for an extra £200 GBP.  This would obviously increase shipping costs. photos available.

I have been interested in scientific instruments since my grammar school days in the 1950s then university at Guys Hospital, London, where I qualified in 1961, and then working as a Dental Surgeon, until retirement from that profession, in 2004.. My antiques business was set up 45 years ago, having followed in the footsteps of my father. Throughout this time I have dealt in scientific instruments, mainly of a military connection. This includes military instruments, microscopes, compasses, Nauticalia, Telescopes, large and small, Binoculars, especially of the German and British Naval forces of the 2nd WW, general optical items and even writing cases.

I attend the Science Fair in,London, and other Antique Fairs, especially the IACF Fairs, at Ardingly, West Sussex, The "Military Odyssey" at Detling, Kent, and occasionaly,the Bisley Fairs, and Birmingham, at the NMM.

To contact me by email, my primary address is ..geoff@millaisantiques.co.uk, but in order to reach my electronic devices, namely my iPhone/iPad, please either Cc, or direct to them, via my secondary email ... millaisantiques75@gmail.com