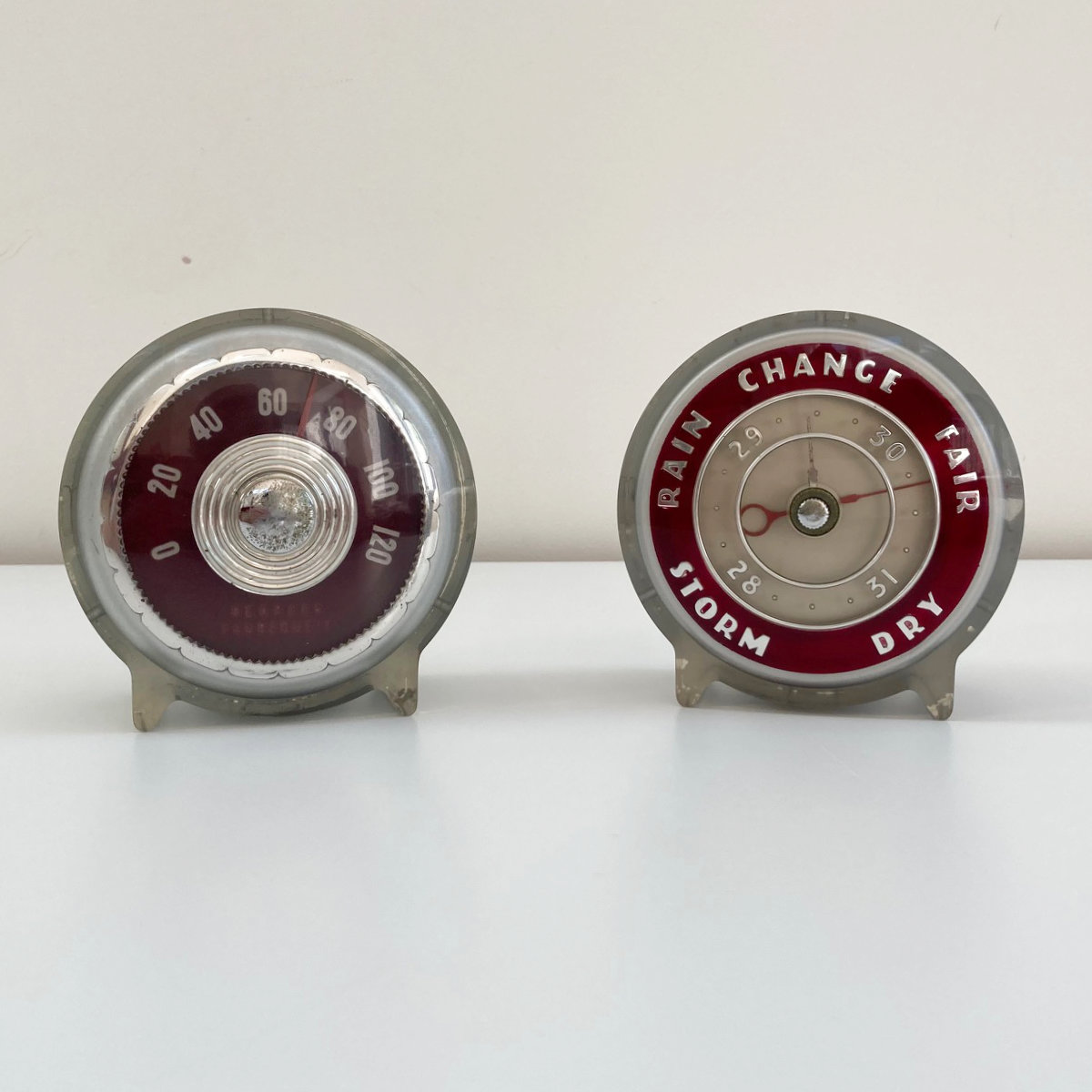 The barometer has a scale reading 28 to 31 inches of barometric pressure with a red outer ring containing weather indications presented in striking silver against the background. The red indicator hand is complemented with a steel set pointer operated by a flat silver dial to the front of the instrument. The reverse of the barometer is embossed with the words, “designed and built by Joseph Lucas Ltd”

The thermometer is similarly designed but with a red scale and silver surround measuring 0 to 120 degrees of Fahrenheit indicated by a red pointer. The base of the scale being engraved with, “degrees Fahrenheit”.   The reverse is also embossed with, “designed and built by Joseph Lucas Limited” but also states, “Movement by the British Rototherm Co Ltd, London England”.

A very unusual set by an uncommon British maker, Joseph Lucas. Despite their contemporary automotive looks, the company dates back to the 1850’s. Started in Birmingham from meagre beginnings, the founder Lucas, started life as a paraffin salesman and graduated to selling basic domestic metalwares. It was his manufacture of ships lamps in the 1870’s that began Lucas’s slow rise to fame and with his son (Joseph Lucas & Son) started to produce lamps for the new bicycle craze that swept Victorian Britain by the end of the decade. Their “King of the Road” lamps were originally designed to be fixed to the Penny Farthing.

Patents were granted for the new Lucas bicycle lamp and the company’s success continued. So much so that by the end of the 1880’s Lucas had built his own Birmingham factory to keep up with demand. By the end of the 1890’s, the company of Joseph Lucas Limited was formed and they began to position themselves within the new automotive market.

Upon Joseph Lucas’s death in 1902, his son took control of the company and led it through increasing growth including the buy outs of numerous companies that added automotive electrical specialism to the brand. As a result they contracted with Morris Motors and Austin to supply electrical equipment and supplied most of the early British motorcycle brands such as Norton, BSA & Triumph.

The company’s Twentieth Century history is one of rampant acquisition and it continued to supply both the automotive and aerospace industries throughout. It became Joseph Lucas (Industries) Limited in 1951 and then Lucas Industries in 1971. It was finally bought out by Thompson Ramo Wooldridge (TRW) in 1999.

The company of Rototherm that supplied the bi-metallic thermometer for this set hailed from a similarly early background. Its history dates back to the patenting of the world’s first steam pressure gauge by Sydney Smith Dennis. His work with George Stephenson on the “Rocket” Steam Locomotive being the catalyst for this new invention. His name remains associated with the production of pressure gauges which continue to be manufactured by Rototherm to this day but in the 1920’s the Dennis firm also invented the world’s first bi-metallic thermometer, the success of which sparked the British Rototherm brand in 1934.

Like Lucas, its later history is also one of rampant acquisition, even buying some of Negretti and Zambra’s recording instrument business in the 1980’s. By the turn of the next century, its global reach continues to expand through the US, Singapore and Australia.

Rototherm were known to have produced their own desk thermometers during the early part of the Twentieth Century but they were less well designed than this desk compendium. Whether Lucas produced these as corporate gifts or whether they were produced for a wider market is unknown but they are certainly the only set I have come across. Distinctive for their Deco period automotive design, this set provides a refreshing departure from the designs produced by the main barometer manufacturers of the period. A superb and stylish set which remains in good working order.