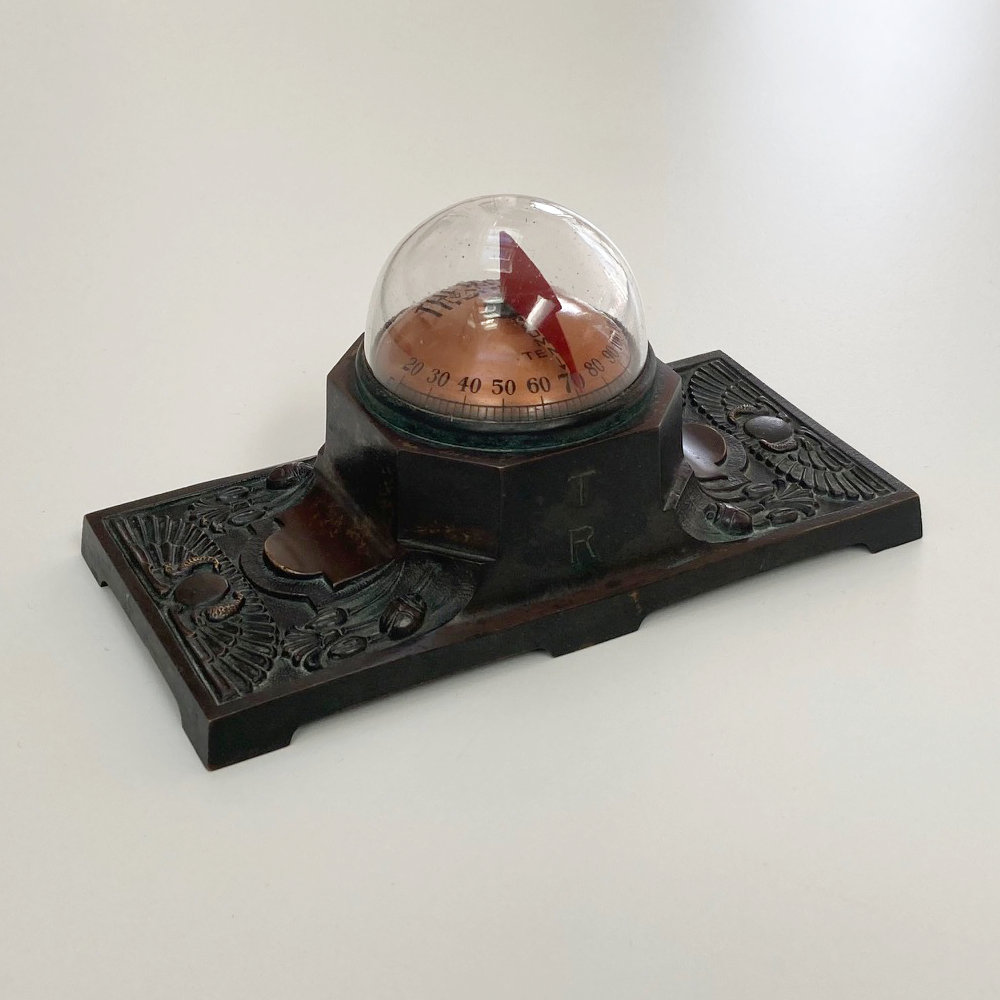 Comprised of a rectangular moulded spelter base with relief Egyptian motifs to each side, the central octagonal column rises up to an unusual, bronze dome with a (20-120) Fahrenheit scale running around the front half of the circumference. The central 70-degree point has a marking denoting room temperature, and the crest is marked with the words, “Thermo Vane”. The red pointer is designed in the style of a flag or vane which graduates at the top to fit succinctly under the domed glass.

The base of the thermometer has a brass grill covering the inner mechanism with numerous holes punched through in order to allow for air flow. The grill is stamped to the makers, Schaeffer & Budenberg, Brooklyn N.Y and below it states, “Patent Applied for – Made in USA”

The maker’s, Schaeffer & Budenberg have a long but slightly disjointed history dating back to their formation in Germany in 1850. Their business was largely involved in the production of pressure gauges after the founder Bernhard Schaeffer’s patent in 1849. His Brother-in-Law Christian Budenberg joined the company, and the partnership began producing steam related machinery from Magdeburg in Germany.

Evidently successful, the company began exporting all over the world and by the beginning of the First World War, they had factories in the US, the UK and various offices, depots and agencies elsewhere.

The First World War was significant for this global company both for its origins and also its geography. Ironically, it seems that in the most part, its manufacturing subsidiaries were commandeered by their host countries and put to work against the German war effort. In the UK, the Budenberg family retained ownership only after a share buy-back in 1917, in the US, the company was commandeered in the same year by the Alien Property Custodian and then sold to the American Gauge & Valve Company in 1919 although it continued to operate independently until 1923 when it was bought by Manning Maxwell Moore.

Varoius other Governmental alliegences awaited the European offices until the mid-Twentieth Century but the UK arm retained the family identity and was finally bought out in 1991 by Burnfield PLC, a company which continues to manufacture pressure gauges across the globe. A lengthy but fitting return after such a long upheaval.

During this period, I suspect that Schaeffer & Budenberg were keen competitors with the British Rototherm business who produced similar bi-metallic thermometers, however, S&B were certainly more attentive to their customers. The resultant Egyptian Deco thermometers are beautifully designed and provide a superb dichotomy between the ancient and modern. Deco at its best!

Please note that the glass dome pictured in the images may seem as though it is marked. This is purely some minor imperfections in the glass from when it was originally moulded.