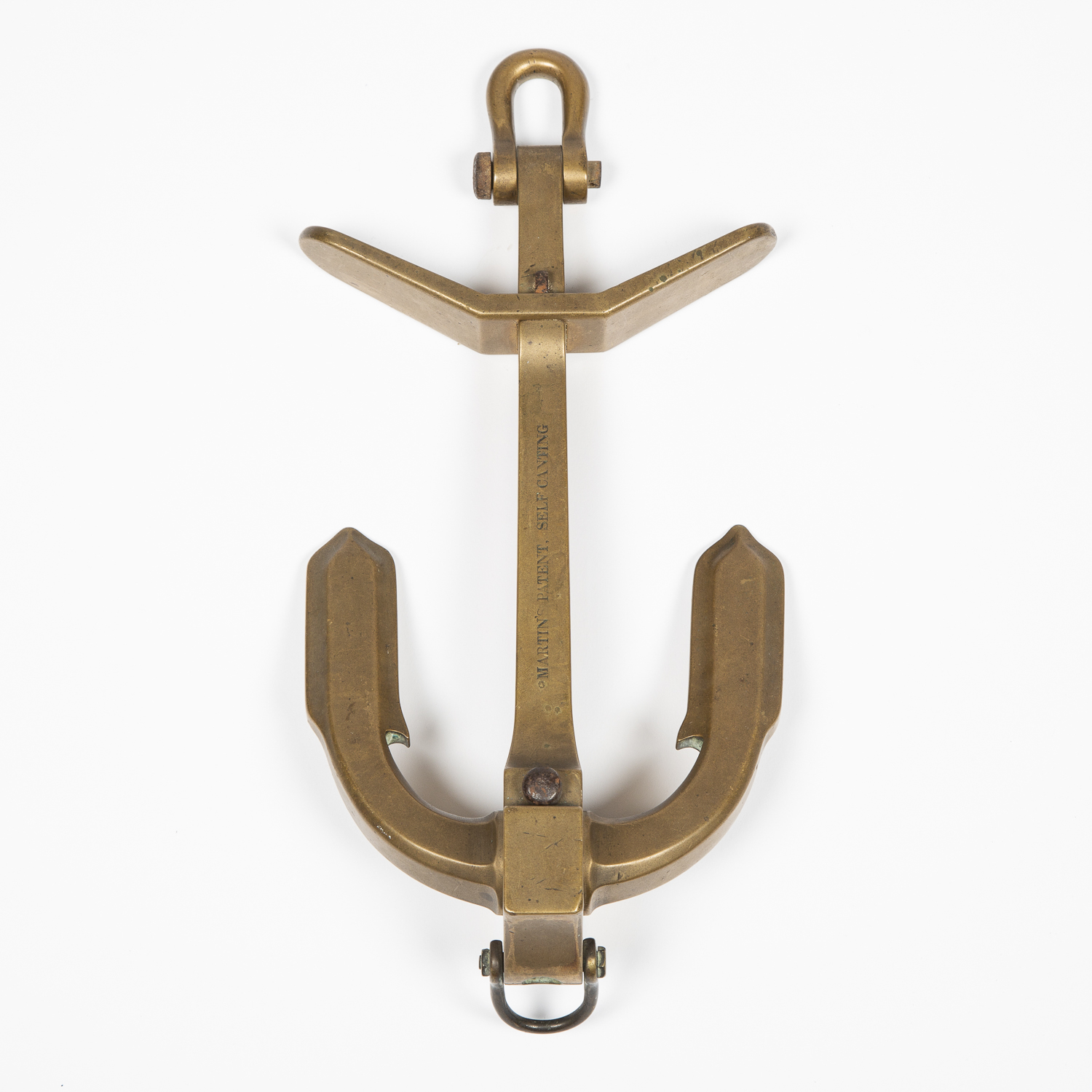 Marked: MARTIN'S PATENT, SELF CANTING TESTED 50 PERCENT OVER THE ADMIRALTY PROOF AT THE WOOLWICH DOCK YARD, WITHOUT DEFLECTION.

A bronze patent model of Martin’s self-canting anchor. Circa 1870.

We come to an anchor of entirely different shape from the preceding, patented by a Frenchman named Martin.

The anchor is represented in the position in which it lies on the ground just before taking hold. The shank is made in one forging, is of rectangular section, having a shoulder for the stock to fit against, and is increased both in thickness and area at the crown; the arms with the palms are forged in one piece, and then bent to the required shape; one of the arms is passed through a hole in the crown and is kept in position by a bolt screwed through the end of the crown, so that its point reaches a little way into an indent made for it in the round part at the back of the arms. Until very recently this securing bolt was placed in the shank in a vertical position (supposing the anchor to be lying with the palms horizontal), so as to cut into the hollow part at the part of the bent arm. A very strong shoulder is worked on the arms, so as to fit in a groove on one side of the shank, in such a manner that the arms will revolve through an angle of 30° either way. The stock is fitted over the shank as shown, and secured by a key, which fixes it tightly against the shoulder left of the shank.

The advantage of Martin’s anchor are as follows:– It is self-canting; it must fall in the position shown in the figure, and the weight of the arms, together with the pull of the cable, presses their sharp points into the soil, so that it takes hold immediately; it is impossible to foul it; it stows much more neatly than any other anchor; its holding power is very great, as both arms are in the soil at th same time, and the stock, which is flat and broad, adds materially to this quality; the strength is also very great.

At an experiment made at Portsmouth dockyard in March 1867, two of the anchors were subjected to a strain of 50 per cent. over the Admiralty proof; the arms were deflected but three-tenths of an inch by this great strain, and when it was removed they regained their former shape.

The anchor is made in three separate forgings without a weld. Unmasted turret ships, which have all-around fire, are, almost without exception, fitted with Martin’s anchor on account of the neatness with which it can be stowed, as the stock of any other anchor, if not unshipped, would obstruct the fire of the guns.