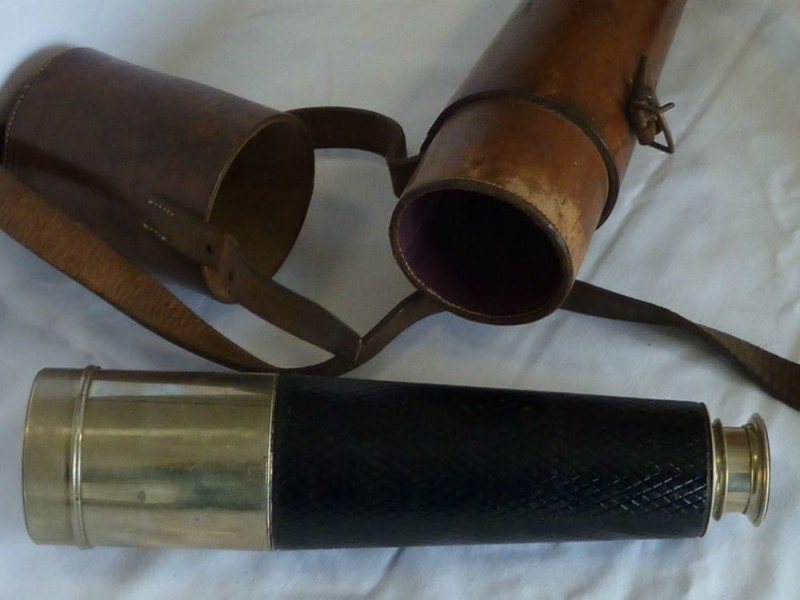 The leather case with the initials T.H.L.S.

In very good condition with no damage or repair, typical rubs on the drawer surfaces from reasonable use.

This telescope, when about 30 years old, will have been bought by or gifted to T.H.L. Spaight in 1899, when he was 20 years old and taking up his commission in the royal Engineers.

After a hair-raising start to his career in the RE Balloon Section,representing his corps demonstrating the first military balloon in Sydney Australia at the 1901 Inauguration of the Commonwealth of Australia, he became a signaler serving in the following posts:

1908 RE telephone detachment commander in the 1908 Mohmand Campaign,

During this period he was awarded the DSO and was Mentioned in Dispatches twice whilst taking part in the battles of The Somme, Messines Ridge and Ypres.

1918 Chief Signal Officer Southern Command in Salisbury then CSO Army of the Black Sea where he was awarded his third MID.

He retired in 1929 then during World War 2 he was Senior Civil Representative of his area near Frensham responsible for co-ordinating civil communication systems connecting different units and organisations. 1939-1954 Administrator of the Corps Benevolent Fund.