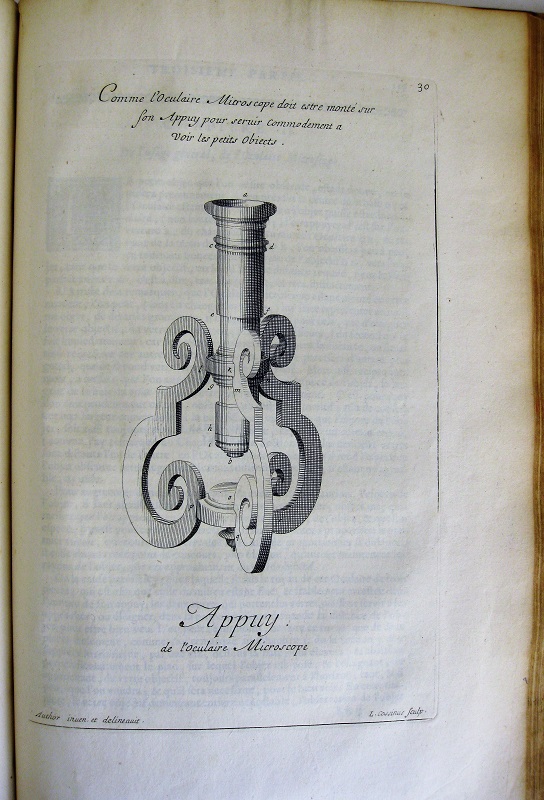 Folio of (46) [on 48, the frontispiece is lacking], 419, [33] pages et 57 planches of which 7 are fodling ; contemporary brown calf (restoration at the spine, joints and corners also restored).‎

This work is a great summary of seventeenth-century optical instruments and their construction, and includes several devices, such as the microscopes and the telescopes, including a binocular ones, invented by Cherubin.

“Cherubin discusses the effects of various kinds of glasses on the eye and explains his techniques for grinding lenses. He first describes an early, stationary, compound microscope; he provides possibly the earliest description of the scioptric” (Albert et al, Source book of ophthalmology p 60).

“The French Capuchin friar Chérubin d’Orleans (1613-97), real name Michel Lasséré) published a large volume in 1671 on optics, in which, among other subjects, he describes his invention of a rhombic pantograph apparatus attached to a telescope and drawing board, by which accurate drawings of distant objects could be made. The point of the inner rhombus was located in the common focal plane of the objective lens and the eyepiece, and a pencil was placed in the joint of the outer rhombus. Thus with a stationary scene and a rigidly mounted telescope plus its accessories, it would be feasible to make enlarged drawings of distant scenes, etc.’ (Whitaker, Mapping and naming the moon, p 76. Whitaker notes that the instrument is depicted in one of two full-moon images in the book, that the instrument would not be suitable for a moving image such as the moon, and that Cherubin has plagiarised Hevelius).

Cherubin was famous for his binoculars and binocular microscopes and telescopes, a number of which have survived to this day. Their construction is described in detail in Daumas, Scientific instruments of the 17th and 18th centuries, pp 32 and 38.

Cherubin also invented the adjustable stage for a microscope: “Chérubin arranged to focus the object by screwing the base up and down by means of a screw in the centre of the base. This appears to be the first instance of a focussing screw being applied to the stage of a microscope’ (Clay and Court, History of the microscope, p 82).”

Chérubin d’Orléans, a prolific microscope- and telescope maker, both ground and polished his lenses with one and the same tool.

He used fine sandstone for an abrasive and, after the grinding process, covered his tool with silk rubbed over with wet putty. On other occasions he paper-polished his lenses, but in both cases he departed from Huygens’ use of a long pole.

Instead, he stuck a short handle to the lens and ground it by hand on the brass tool’ (King, History of the telescope p 57).

The two double-page full-moon images feature cherubim (perhaps a visual pun on the author’s name) at the corners wielding a variety of optical instruments, including a binocular telescope that Cherubin invented. The plates were designed by Cherubin and engraved by L. Cossinus.

Other plates depict lens-grinding lathes and other apparatus, and microscopes and telescopes.

One plate depicts the movement of sunspots on two solar discs.

Printed ex-libris of “The John Crerar Library at Chicago” repeated in the entire volume at the back of the plate, stamped ex-libris of “Ulysse Person géomètre 1873″ et inscription of to Person Monsieur Mourges” and dated of 1920.

Wormhole in the margin from the page 343 to the end.

But still a good reading/work copy, complete of all its plates despite the frontispieces.