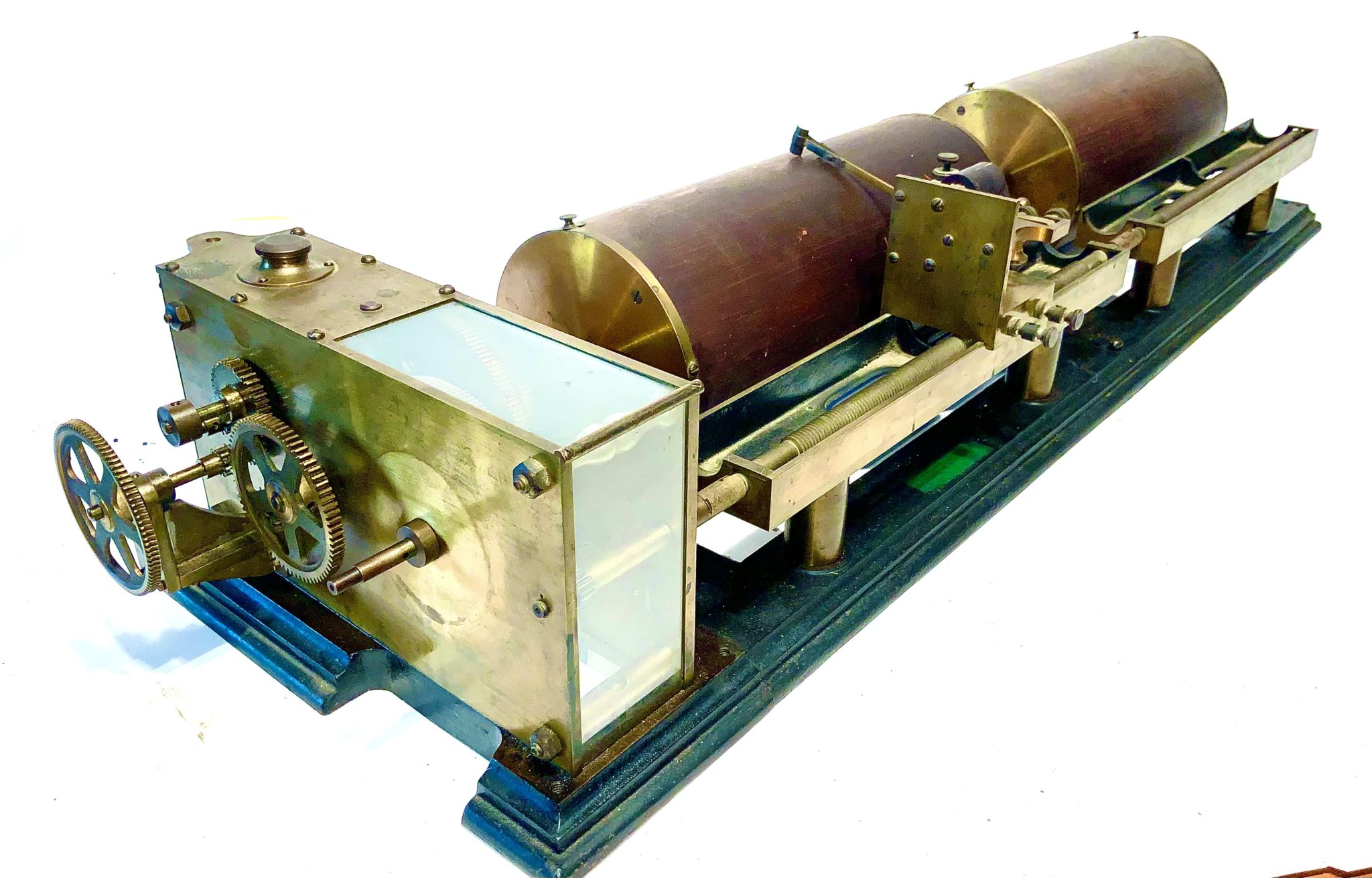 In as acquired condition not cleaned or polished in anyway. Light machine oil was applied to internal geared mechanism and friction surfaces prior to exercising gear train, rotating drums and gear driven electro-mechanical lift-off stylus. It exhibits original aged patina.

Sorry for the exhaustive description {see photos for confirmation, note: and correction, addition and or interpretation humbly encouraged. }

Fine details include a 2 7/8 inch x 2 7/8 inch base with guides corresponding to base mounted lead screw slides and undermounted brass plate-nut in concert with 5/8 inch diameter threaded lead-screws.

This interesting, rare instrument retains over 125 years of accumulated dust. Not cleaned or polished in any way.

Missing the following features: 1) The external weight driven geared mechanism .  The cast base with original  recess in end-base for chain or other wire connectors to below table weight drive .  Also missing  2 inch tall gear driven governor believed to be of vane design, easily replicated.

Historical Info regarding the Astronomical Chronograph

Smith College graduated its first class in 1879, and astronomy is listed in the very first published course list, being required of all students in the junior year, with “Advanced Studies in Astronomy” required in the senior year for students choosing the “Scientific Course [major]” (Smith College, 1876). In an early example of four college cooperation the courses were initially taught by Amherst College astronomers William Esty and then David Todd, who were listed in the Smith catalogs among the “Lecturers and Non-resident Teachers”. Todd in fact supervised the construction of the first Smith College Observatory and arranged in 1886 for the purchase of an 11-inch refracting telescope with an Alvan Clark lens and an equatorial mount built by the Warner and Swasey Company (Astronomy, 1887). At this time it has been noted that a drum chronometer was acquired.

From its infancy, timekeeping has depended on astronomy. The motion of celestial bodies relative to the rotating Earth provided the most precise measure of time until the mid-twentieth century, when quartz and atomic clocks proved more constant. Until that time, mechanical observatory clocks were set and continuously corrected to agree with astronomical observations.

The application of electricity to observatory timepieces in the late 1840s revolutionized the way American astronomers noted the exact movement of celestial events. U.S. Coast Survey teams devised a method to telegraph clock beats, both within an observatory and over long distances, and to record both the beats and the moment of observation simultaneously. British astronomers dubbed it the “American method of astronomical observation” and promptly adopted it themselves.

Transmitting clock beats by telegraph not only provided astronomers with a means of recording the exact moment of astronomical observations but also gave surveyors a means of determining longitude. Because the Earth rotates on its axis every twenty-four hours, longitude and time are equivalent (fifteen degrees of longitude equals one hour).

In 1849 William Cranch Bond, then director of the Harvard College Observatory, devised an important improvement for clocks employed in the “American method.” He constructed several versions of break-circuit devices—electrical contracts and insulators attached to the mechanical clock movement—for telegraphing clock beats once a second. The Bond regulator shown in the forground incorporates such a device. Bond’s son Richard designed the drum chronograph, an instrument that touched a pen to a paper-wrapped cylinder to record both the beats of the clock and the instant of a celestial event, signaled when an observer pressed a telegraph key. {See photo of Bond and Son , Drum Chronograph , designed by son Richard Bond, 1868 } Courtesy of Smithsonian .

The automatic registration of time observations by means of electro-magnetism is an improvement in practical astronomy due to American ingenuity. The merit of its first suggestion has been somewhat in dispute, but the earliest experimental demonstration of its feasibility was certainly made by Professor John Locke, of Cincinnati and Pittsburgh. The distance is four hundred miles, and the experiment was continued for two hours, during which the beats were regularly registered at every station throughout the whole line. The application to astronomical observation immediately followed. In recognition of the value of this invention, Congress awarded to Dr. Locke the sum of ten thousand dollars, and ordered a clock of the same description to be constructed for the Naval Observatory. As a recording instrument, the ordinary telegraphic register of Professor Morse was at first employed. More convenient forms of apparatus were subsequently devised by Professor Mitchell, Mr. Joseph Saxton, of the Coast Survey, and Messrs. W.C. and George P. Bond, who introduced the regulator which has since been so almost universally employed in these instruments, known as Bond’s spring governor. More recently (1871) a printing chronograph has been invented by Professor George W. Hough, of the Dudley Observatory, which records to the hundredths of a second, and saves to the observer who employs it the labor and time required for deciphering and recording in figures the indications of the register in common use. The electro-magnetic method of recording transits was adopted without delay in the observatories of the United States and soon after found its way into those of Great Britain and the continent of Europe, where it was known as the American method. Of its great value in promoting accuracy it is not necessary to speak; but only those who can adequately appreciate the degree to which it has lightened the labor of the observer. Previously to its introduction the clock divided with the object viewed the observer’s attention, and the necessity for unceasing vigilance was exhausting in the extreme. If nothing else had been gained by it but this, the benefit would be incalculable.

The Naval Observatory depended on the accurate determination of time when recording stellar positions. To have a method more accurate than the practice of a human observing a clock. John Locke fitted an existing astronomical clock with a circuit-breaking device and by late Nov 1848 had devised a practical way to register both time and an observed event on the same record. At first, Locke called it his “magnetic clock.”

When in Dec 1848 he was notified by Locke, the first Superintendent of the U.S. Naval Observatory, Navy Commander Matthew Fontaine Maury, immediately recognized the significance of Locke’s device, calling it “one of the most important inventions of the age.” He promptly wrote to John Mason, the Secretary of the Navy, enthusing, “The discovery consists in the invention of a magnetic clock, by means of which seconds of time may be divided into hundredths with as much accuracy and precision as the machinist, with rule and compass, can sub-divide an inch of space. Nor do its powers end here. They are such that the astronomer in New Orleans. St. Louis. Boston, and in every other place to which the magnetic telegraph reaches, may make his observations, and, at the same moment, cause this clock, here in Washington, to record the instant with wonderful precision. Thus the astronomer in Boston observes the transit of a star as it flits through the field of his instrument, and crosses the meridian of that place. Instead of looking at a clock before him, and noting the time in the usual way, he touches a [telegraph] key; and the clock here subdivides his seconds to the minutest fraction, and records the time with unerring accuracy. The astronomer in Washington waits for the same star to cross his meridian, and, as it does, Dr. Locke’s magnetic clock is again touched; it divides the seconds, and records the time for him with equal precision. The difference between these two times is the longitude of Boston from the meridian of Washington.”

William Cranch Bond was born in Falmouth, Maine (near Portland) on September 9, 1789. When he was young, his father, William Bond, established himself as a clockmaker after a failed business venture; trained by his father and aided by his penchant for engineering, W. C. Bond built his first clock when he was fifteen years old. He eventually took over his father’s business, becoming an expert clockmaker himself. The William Bond clock shop remained in existence at 9 Park Street in Boston until the 1970s

At the 1851 Great Exhibition, the Bonds introduced the drum chronograph to the scientific community, combatting the human inaccuracies inherent in observing star transits. The system was greatly admired and universally employed. The Astronomer Royal, Sir George Airy, even coined a term for it: the ‘American Method’.?

Certain experiments for determining differences of longitude by the aid of the telegraph were undertaken by the Coast Survey in 1848, Prof. Bond being one of the special assistants whose services were secured for this work. While engaged in these experiments the idea occurred to him, as it had to one or more others, of using an automatic circuit interrupter in place of human nerves and muscles as the connecting link between the astronomical clock and the electric wire. Fear of injuring the clock had prevented the use of such a device, but Prof. Bond obtained authority to have a clock made especially for this work, at the expense of the survey. This was done, and the device was found to operate perfectly and without injury to the clock. “But another and far more serious difficulty presented itself,” says Prof. Bond, referring to this matter in one of his reports, “in the accurate registry of the beats of the clock after being transmitted by the galvanic circuit; and it was at this point that further progress in the application of this method to astronomical observing was arrested.” Attempts to overcome this difficulty were made by various inventors in the course of the next two years, but nothing satisfactory came of it before April 12, 1850, when Bond submitted to the Coast Survey an apparatus invented by him and his sons George P. and Richard F. Bond. It was named at first, from one of its peculiar parts, the “spring governor,” but the more comprehensive title of “chronograph” was applied to it later. The apparatus was at once adopted for use by the survey. It was taken by Mr. G. P. Bond on his tour to Europe of the next year and exhibited before the Royal Astronomical Society of England and the British Association for the Advancement of Science. Through the urgency of Sir David Brewster and others it was set up in the great exhibition of that year in London, where a medal was awarded for it. It was adopted at the Greenwich Observatory soon after, and speedily throughout Europe. The use of the “circuit interrupter” and the “chronograph” together constitute what became known in Europe as “the American method” of recording observations. Through it the errors for which the “personal equation” is a partial remedy are largely eliminated, and a superior definiteness of record is attained.