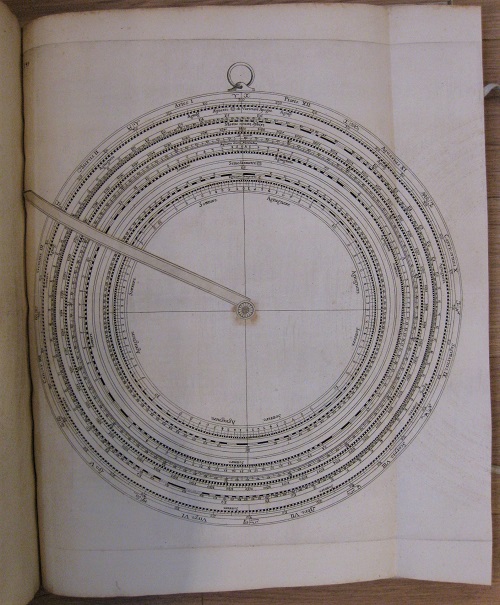 The most important and richly illustrated book from the 17th-18th centuries about maritim, navigational and astronomical illustrated printed in large format folio (35×47 cm) including 36 illustrations with volvelles or moveable parts.

“Dudley was the illegitimate son of Robert Dudley, Earl of Leicester, and brother-in-law of the celebrated circumnavigator Thomas Cavendish. Dudley joined the Royal Navy and led a privateering expedition to South America in 1594-1595. In 1596, he commanded the ship Nonpareil in the Earl of Essex’s successful attack on Cadiz, and was knighted for his services.

Dudley sought to have his legitimacy established at court, but his attempts failed, and he fled abroad, eventually settling in Florence. Dudley was summoned to return to England but refused and was stripped of his titles and estates.”

In Florence, Dudley put his naval experience to good use; he worked as a ship-builder, consulted on construction projects for harbours and their fortifications, while also writing his magnus opus, a handbook of navigation, ‘Dell’Arcano del Mare” (https://www.crouchrarebooks.com/mapmakers/robert-dudley)

“The atlas is divided into six books, or sections: book one deals with longitude; book two covers errors in the then-existing sea charts, and includes the portolano for the Mediterranean and 15 general maps; book three deals with naval and military discipline, notably the former, and there is a long section on naval tactics, especially remarkable for a plan of the construction of a navy in five grades of vessel; book four describes the method of designing and building ships of the “Galerato” and “Galizaba” types and is concerned with naval architecture, giving the lines and dimensions of ships; book five is devoted entirely to navigation and methods of measuring the sun’s declination and the relative positions of the stars; book six contains the sea atlas.” (https://www.crouchrarebooks.com/atlases/view/dudley-robert-arcano-del-mare-di-d.-ruberto-dudleo-duca-di-northumbria-e-co)

This fifth book is complet in itself and represents the best and most beautiful 17th and 18th century book about maritime/navigational and astronomical instrument including mostly nocturnals, sundials and some

“Sir Robert Dudley (1574-1649) was the illegitimate son of the Earl of Leicester, one of the most prominent courtiers of Elizabethan England. Although his name appears on several instruments, he was no ordinary maker. He commissioned a number of instruments from London makers in the 1590s and took these with him when he left the country in 1605. He settled in Tuscany in the service of the Medici where he published his lavish multivolume work Dell’Arcano del Mare in 1646-7. Although principally a patron of makers, Dudley may also have dabbled in engraving and some of the instruments inscribed as being his invention may be at least partly in his own hand.” (http://www.mhs.ox.ac.uk/epact/maker.php?MakerID=98)

At the outset, he employed Antonio Francesco Lucini to engrave the plates. The Arcano del mare was a monumental and totally original task, the charts, representations of instruments and diagrams all engraved on huge quantities of copper over many years with an exactitude incorporating the minutest detail and printed on the best possible paper. The whole surpassed anything published before and was not equalled in quality until fifty years later in France under Louis XIV. Lucini was born in Florence c.1610 (or 1605, according to Benezit). He was a pupil of Callot and a friend of Stefano della Bella. Before entering Dudley’s employ, he had already published engraved views of Florence and scenes of the Turkish Wars. Lucini put the stamp of his personality on the finished work as much as Dudley himself; the delicacy and strength of the engraving, the embellishments of the lettering “alla cancellaresca”, make it a true example of Italian Baroque art. In a printed introductory leaf found in one copy in the British Library, Lucini states that he worked on the plates in seclusion for twelve years in an obscure Tuscan village, using no less that 5,000 lbs of copper. According to the engraver, the Arcano del mare took forty years to prepare and twelve to execute.

“His Arcano del Mare (Secrets of the Sea) was published in three very large volumes … It is an encyclopedia of everything connected with the sea from shipbuilding to navigation to cartography. This volume, the only one of the three in this collection, contains the text and volvelles for the sections devoted to navigation. It has been said that this volume is to the history of precision instruments of the seventeenth century what Peter Apian’s Astronomicum Caesareum was to the sixteenth” (Tomash & Williams).

Bound in circa 1900 rigid vellum, the copy is fully complete of all its illustrations and volvelles (one is losse).

One plate have an old restoration affecting a very small part of the engraving (see pictures) and some engravings were formely/originally pasted then the paper take a brown color.