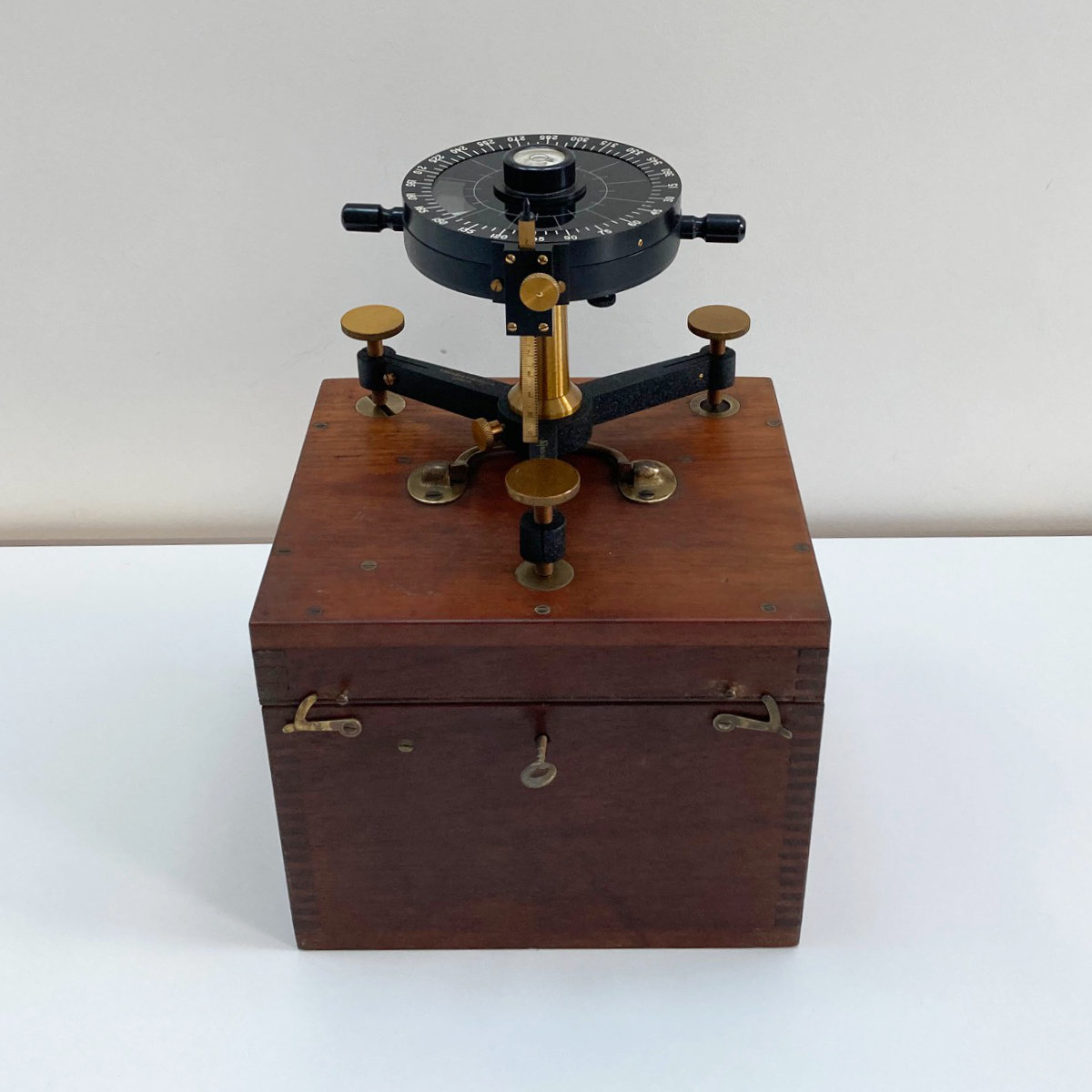 Developed by Carl Gottfrid Fineman this fine and rare instrument consists of a magnetic compass which is unlocked by means of a screw on the underside of compass bowl. The top of the compass is graduated in degrees around the outer edge and has a black glass centre to allow reflections of the clouds above.  Underneath the compass bowl is a circular metal frame with hand adjusters on each side. A window in this glass enables the observer to see the tip of the compass needle underneath which should be set to North before use. On the surface of the mirror are engraved three concentric circles and four diameters; one of which passes through the middle of the window. The mirror constitutes a compass card, its radii corresponding to the cardinal points. On the movable frame surrounding the mirror is fixed a vertical pointer graduated in millimetres, which can be moved up and down by means of a rack and pinion. The whole apparatus is mounted on a tripod stand provided with levelling screws. The tripod feet are engraved with both the makers name of Francis Barker & Son (1932) Limited, London and the Met Office logo with serial number 383/52.

To make an observation, the mirror is adjusted to the horizontal with the levelling-screws, and is oriented to the meridian by moving the whole apparatus until the compass needle is seen, through the window, to lie in the north-south line of the mirror. The observer stands in such a position as to bring the image of any chosen part of a cloud at the centre of the mirror, the vertical pointer is also adjusted by screwing it up or down and by rotating it around the mirror until its tip is reflected in the centre of the mirror. As the image of the cloud moves toward the circumference of the mirror the observer moves his head so as to keep the tip of the pointer and the cloud image in coincidence. The radius along which the image moves gives the direction of the cloud’s movement, and the time required to pass from one circle to the next its relative speed.

The inventor, Carl Gottfried Fineman was a Swedish physics graduate from Uppsala University. Staying on as an assistant Professor of the University’s Meteorology Department, he was invited to join an exploratory voyage to South America, Australasia, Asia and Europe on the Frigate Vanadis from 1883 to 1885. Following his return, he devised this new instrument which culminated in his receiving a doctorate for research into the use of the nephoscope.

The voyage probably had a profound effect on Fineman and by 1890, he was teaching physics at the Swedish Naval Academy and also undertook work for the Nautical & Meteorological Office, finally becoming its Director in 1904. His later life saw a departure from scientific endeavour and he ran a number of business from 1919 until his death in 1937.

His instrument however, continued to be used across the globe as is evident from the Met Office markings engraved to the foot of this instrument.

The maker of this fine example, Francis Barker & Sons has a history dating back to the 1820’s with the founder originally trained and employed by the compass makers J&G Simms. The company of Francis Barker & Sons was formed in 1848 and eventually consumed his old employer’s business upon their retirement. Largely a wholesale concern, the business sold its compasses to many of the top makers of the Victorian period. The founder died in 1875 leaving various family members to continue the business but by 1932 financial difficulties saw the firm taken over and renamed Francis Barker & Sons (1932) Limited. The reputation of this superb maker continues to thrive to this day under the stewardship of Pyser-SGI Limited of Edenbridge where compasses are still produced under the Barker name.