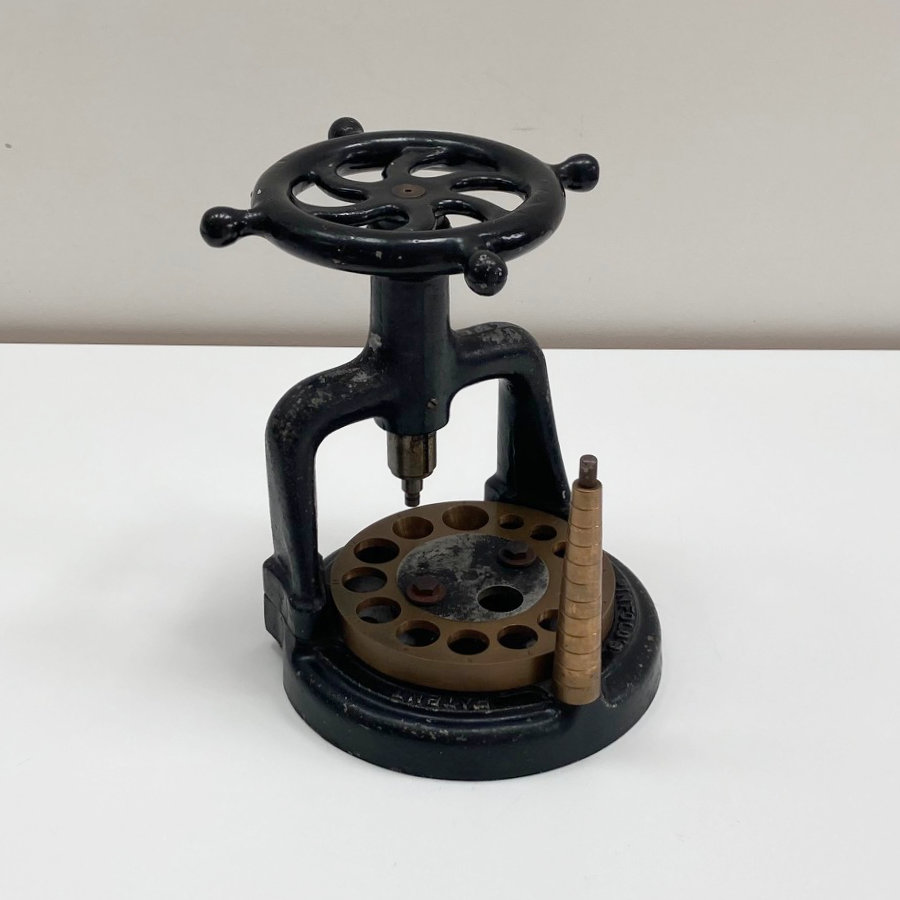 Patented by Arthur Gough Pinfold in April of 1920, this ingenious invention represents the second of Pinfold’s numerous patents that gained reasonable success during his lifetime, the first being his patent metronome. Most of Pinfold’s invention remained fairly close to home, given that he grew up amongst musicians, watchmakers and jewellers and this simple but effective machine was no different.

Comprised of a cast iron base with two shoulders rising to support a descending screw ram operated by a cast iron wheel at the top, it is also cast in relief with wording that states, Pinfold’s Patent around the base’s edge.

A brass collar is placed over the centre of the base which has numerous holes relating to the various standard ring sizes marked 1 to 12 and which can be spun into position under the ram as required. There are two futher conical holes which may also be used for size reduction.

At the front of the base an upright steel rod is positioned to retain 12 original brass attachments to be placed on the ram head and used in conjunction with the central collar.

“Pinfolds Patent Archimedian Ring Sizing Tool – A & G P beg to call the attention of the trade to the following improvements in the above tool, and which they believe constitute a perfect tool.

Three sizing blocks, containing 13 holes graduated 1/32 of an inch; also two specially shaped holes for shrinking, by which the modern broad half-round rings are successfully altered without mark or alteration of outside shape.

Tools purchased previous to this advertisement can have the improvements added at a small cost. A whole town can be supplied from a small stock of rings, whilst this possessing large stocks can avoid delay and expense incurred by sending rings away to be altered.

GET ONE! Place it in your window, advertise rings altered without reducing the weight, whilst you wait. A guarantee given by A & G P with every tool.”

Arthur Gough Pinfold was born in 1865 in Buckinghamshire, his father a musician, watchmaker and jeweller. Both Arthur and his younger brother George were trained in watchmaking and in the early 1880’s the family moved to Yorkshire from where the business of A&G Pinfold was originally established in response to the patent’s success. Sadly, after difficulties encountered by the company, George moved his family to Margate due to ill health but Arthur continued to produce inventions after this point. In the same year as the company’s failure, Arthur patented a “domestic dish washer” that combined a mop and a brush on the same implement (the likes of which are still produced today) and another two patents were lodged for diverse ideas such as trouser stretchers and chin rest for violins (1909). It is often considered that the Patent Archimedian Ring Sizing Tool was originally patented in 1920 but although the exact details are hard to pinpoint, it seems clear from patent records that this invention was originally the creation of Arthur and his brother George in 1894. The original patent (see images) is somewhat smaller than the example offered here and I suspect that the demise of the metronome business and the ill health of his brother resulted in the shelving of the original ring sizer’s production. Pinfold presumably revived the idea some 25 years later and reconsidered it for patent with some additional improvements. The offer of upgrading existing instrument in the advert also points ot a similar conclusion.

Whatever the case may be in respect of the machine’s development, it is testament to its simple and effectively engineered design that the machine remains in use by jewellers to this day.