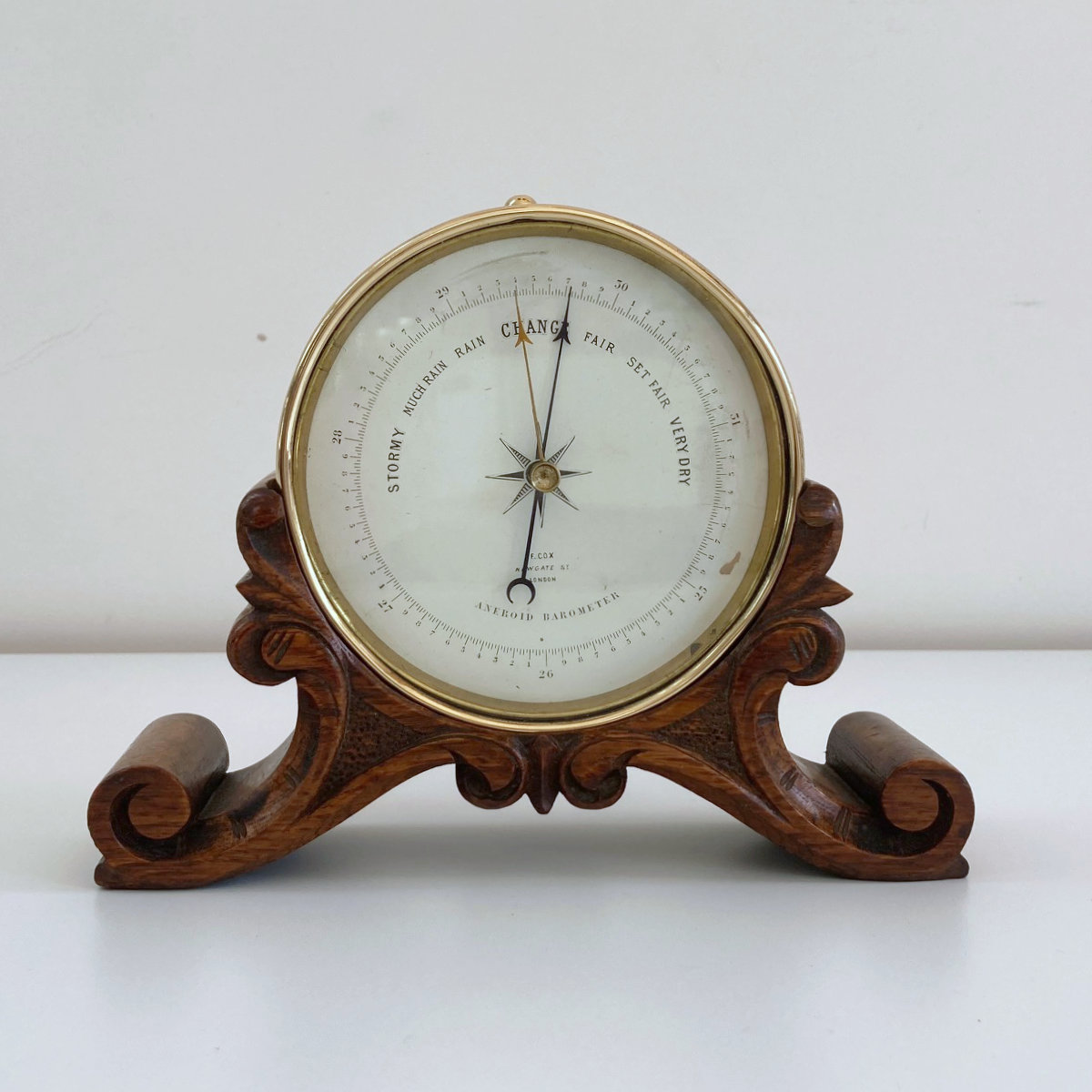 Comprised of a 4.5” card dial containing a large scale measuring 25 to 31 inches of barometric pressure divided to tenths of an inch. The top half of the scale is provided with Vidi type weather indications, the centre with a seven-pointed star motif and the base printed with the retailer, “F. Cox Newgate St, London” and the words, “aneroid barometer”. The blue steel indicator hand is finished with a crescent moon design and the brass setting hand. Although unmarked, this example, owing to its style and like many of the period would have been imported from France from famous firms such as Naudet.

The elegantly sized oak base is superbly executed with floral scroll motifs emanating from either side of the barometer. This style is perhaps the most aesthetically pleasing of the Victorian stands and (in my view at least), provides the most appropriate proportions without overwhelming the instrument.

The retailer, Frederick James Cox was born in 1834 in Shoreditch, the son of optician, Frederick Cox. Cox’s adverts of the 1870’s proudly state that the company had been established for, “upwards of 120 years” but given that their beginnings seem to have been in Essex, it is unclear whether the family moved their business to London, or, as was common practice, they bought an established business and changed the name. Nevertheless, Cox was most likely apprenticed to his Father and joined the business as a partner.

The company’s earliest known trading address was at 22 Skinner Street in 1856, where alongside their optician & instrument making business, they began the manufacture of photographic equipment. Cox was clearly a keen proponent of the new science and released a hugely popular pamphlet named, “A Compendium of Photography” which underwent revisions until 1873.

The company remained there until its premises were consumed by the development of Holborn Viaduct, a circumstance which also affected the fledgling business of Negretti & Zambra. Whilst Negretti eventually took on new premises in this development, the Cox business moved a short distance South to 26 Ludgate Hill where they remained until 1882 and where after the firm of H & EJ Dale (electrical & scientific apparatus manufacturers) took over.

The company’s premises at 100 Newgate Street are somewhat of a mystery and records for the Cox business at that site are vague about their tenure. My initial suspicion is that the Father & Son ran separate sites of the same business, but their close proximity seemed not to make a huge amount of business sense until you consider that The London School of Photography had premises at 103 Newgate Street during this time. The inter-use of F Cox & FJ Cox is also cause to suggest that they may have been separate but both were certainly retailing a wide range of scientific instruments at the time including photographic equipment. I must concede on the establishment date however I suspect that both premises were sold in 1882.

FJ Cox was certainly a wealthy man at the time of the sale of the London premises. He is listed as residing at The Laurels in Dulwich in 1881 and is recorded as an Optician in Eastbourne by 1891 for which extant examples of his products are known. He was retired by 1901 and died in Eastbourne in 1907. Like many others at the time, his move to the coast may have been prompted by health reasons.