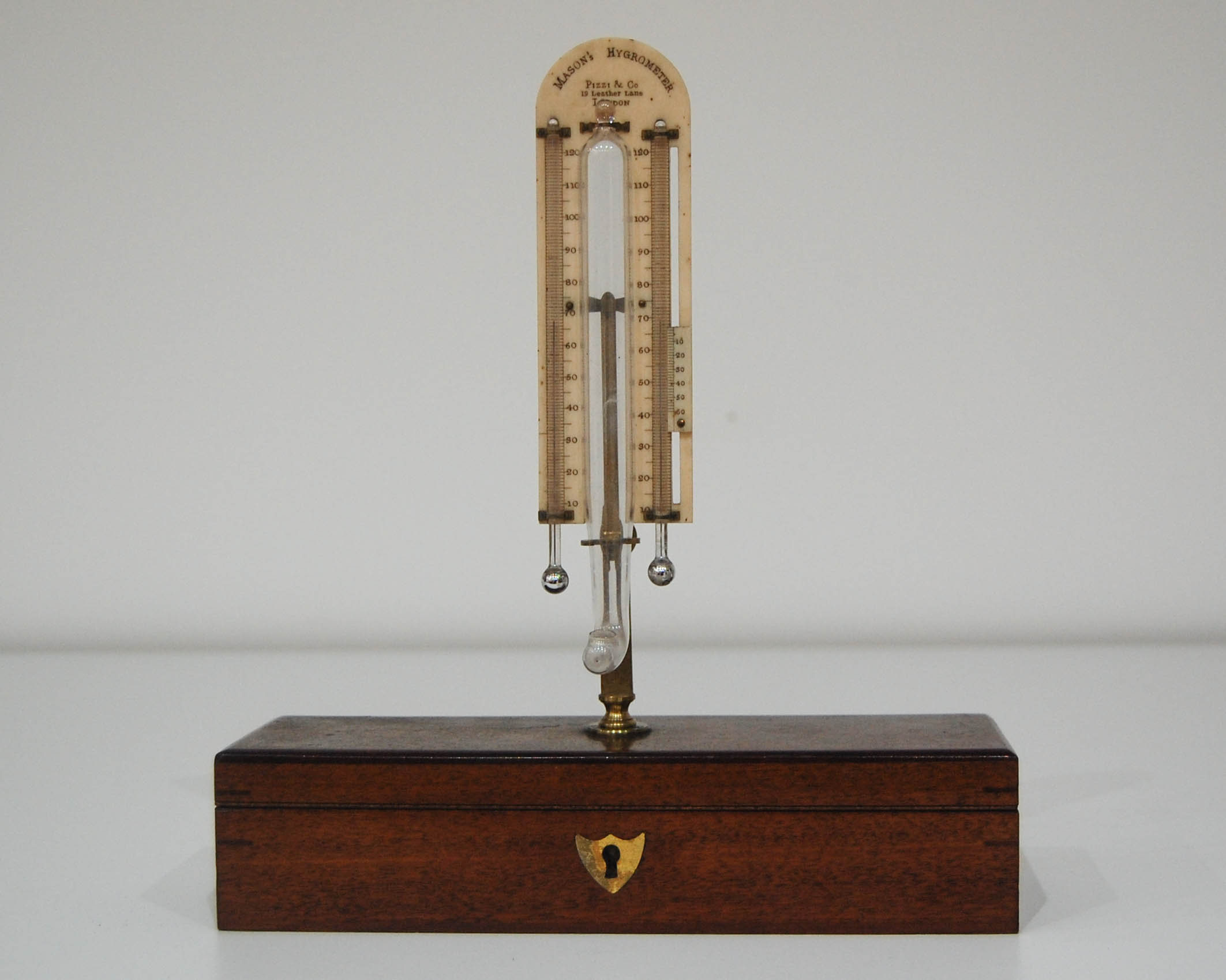 The instrument is comprised of two thermometers affixed by four brass clasps to a bone U shaped scale plate. Both using a Fahrenheit scale registering 10 to 120 degrees and the right (wet bulb) complete with Vernier adjustment. The maker’s name is engraved to the top as follows, “Mason’s Hygrometer. Pizzi & Co 19 Leather Lane, London”.

The scale plate is attached to a brass stand at the back with threaded base for attaching the scale to the outer lid of the case when in use and has an integrated collar which allows for a glass vial to be held in the centre of the scale plate which is further secured by a brass collar situated at the top of the scale. The box contains its two original glass vials (one spare) which would have been filled with water. The open end to the base would have stoppered with a cotton tubing which would have been attached to the bulb of the “wet” thermometer.

This very rare and unusual thermometer set is contained within an immaculate mahogany case with red velvet lined interior. The hinged lid also incorporates female screw fitting to allow the scale plate to be secured when in use.

Meteorological instruments such as these have a number of associated names, hygrometer meaning the measurement of moisture or water, the name psychrometer (cold meter) was used by the German inventor Ernst Ferdinand August (1795-1870) and during the same period in 1836, the Surgeon, John Abraham Mason was presenting his new, Mason’s Hygrometer. An article in the Record of General Science describes a “new hygrometer illustrated by experiments and a comparison of its results with Sir John Leslie’s”. Leslie had in 1805 developed an air thermometer based upon Galileo’s thermoscope. Sadly, Mason’s name is no longer commonly associated with his invention but its continued manufacture into the 1840’ and 50’s is testament to its superior accuracy.

The maker of this super instrument, Pizzi & Co may not be immediately familiar but it provides a real insight into the Italian émigré community which blossomed in the early nineteenth century and ultimately capitalised on the British obsession with the weather. The premises at 19 Leather Lane was originally owned by Angleo Tagliabue, an adept scientific instrument maker who like most, hailed from the Lake Como region of Northern Italy. Long forgotten but hugely influential, the Tagliabue family not only apprenticed a young Henry Negretti who would have worked at the premises during his early career but also apprenticed and formed a later partnership with the equally influential Louis Casella. The Tagliabues also went on to form a partnership with Joseph Zambra so it is clear that this family were instrumental in the formation of both Casella and Negretti & Zambra, the two great instrument makers of the Victorian age.

In 1841 after the death of her husband Valentino, Jane Pizzi took over the premises at Leather Lane from Angelo Tagliabue and continued her husband’s scientific instrument making business. Between 1841 and 1845, the records suggest that Pizzi continued to employ Henry Negretti who had by this time become an adept glass blower, barometer and thermometer maker, and then shortly after, went into partnership with him until 1845 whereafter Negretti took over the premises as Negretti & Co.

Given the evidence, it is likely that this instrument was manufactured in the early 1840’s prior to the Pizzi, Negretti partnership (it is signed Pizzi & Co) but at the very least it can be accurately dated to between 1841 and 1845. Given the small size of this enterprise it is not beyond the realms of belief that the instrument may also have been constructed and produced in some part by Henry Negretti himself. Negretti’s later career is well documented through his partnership with Joseph Zambra, a relationship which would produce some of the finest meteorological instruments of the era but to find an instrument from his early career where he was actively involved in production is a rare occurrence.

The instrument itself is a rarity but with an equally superb pedigree, it exists as an exemplar of its type and remains in working order.