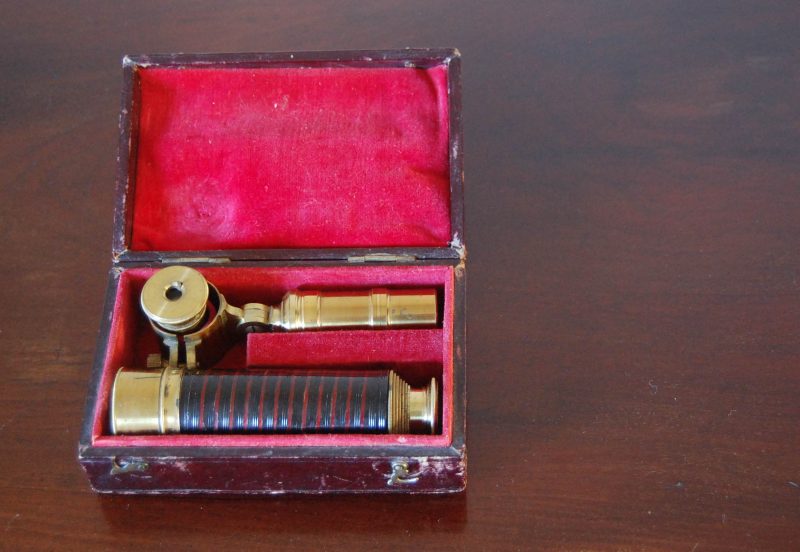 This super little brass six draw telescope with one inch diameter objective lens has a rare red and black striped baleen covered barrel and original brass end cap. The case is covered in original dark red leather with eye hook closers and a red velvet sectioned interior. The contents also include the original stand with barrel clasp and end cap which reveals a threaded screw rather than legs, making it practical for use in the field where it may be screwed down into a tree branch for stability. The set is completed with an additional eye piece lens however it must be noted that there is a small chip present on this accessory. Focus can still be achieved but the chip does present itself when in use. Please note, that the main objective lens contained within the telescope is in perfect condition.

The Newton’s have a long and distinguished history dating back to the start of the eighteenth century, the founder being a cousin of Sir Isaac Newton. Their heyday, however was during Queen Victoria’s reign where from the 1850’s the cousins William Edward and Frederic Newton were situated at their 3 Fleet Street. Temple Bar, London address. This short lived partnership traded from 1851 to 1856 but provided the basis for the company, Newton & and Co which continued to trade from that address until the early part of the twentieth century. They were scientific instrument makers to the Queen and were prize medal winners at the Great Exhibition. Newton & Co instruments are more abundantly encountered owing to the length of its trading history. These early instrument are more seldomly seen especially in such complete condition.

Baleen is a material taken from the filter feeding systems inside the mouths of whales and was a by-product of the whaling industry that was employed in the manufacture of high end handheld telescopes during the early to mid-nineteenth century. They are rarely encountered today but the material must have been selected for its durability and its ability to take coloured dye. Examples have been seen in numerous colours including green, black and red and are always of the upmost quality.

A superb complete and very collectible little cased telescope produced to the highest standards and by a rare maker. Given the company’s trading dates, the telescope can be confidently dated to between 1851 and 1856.