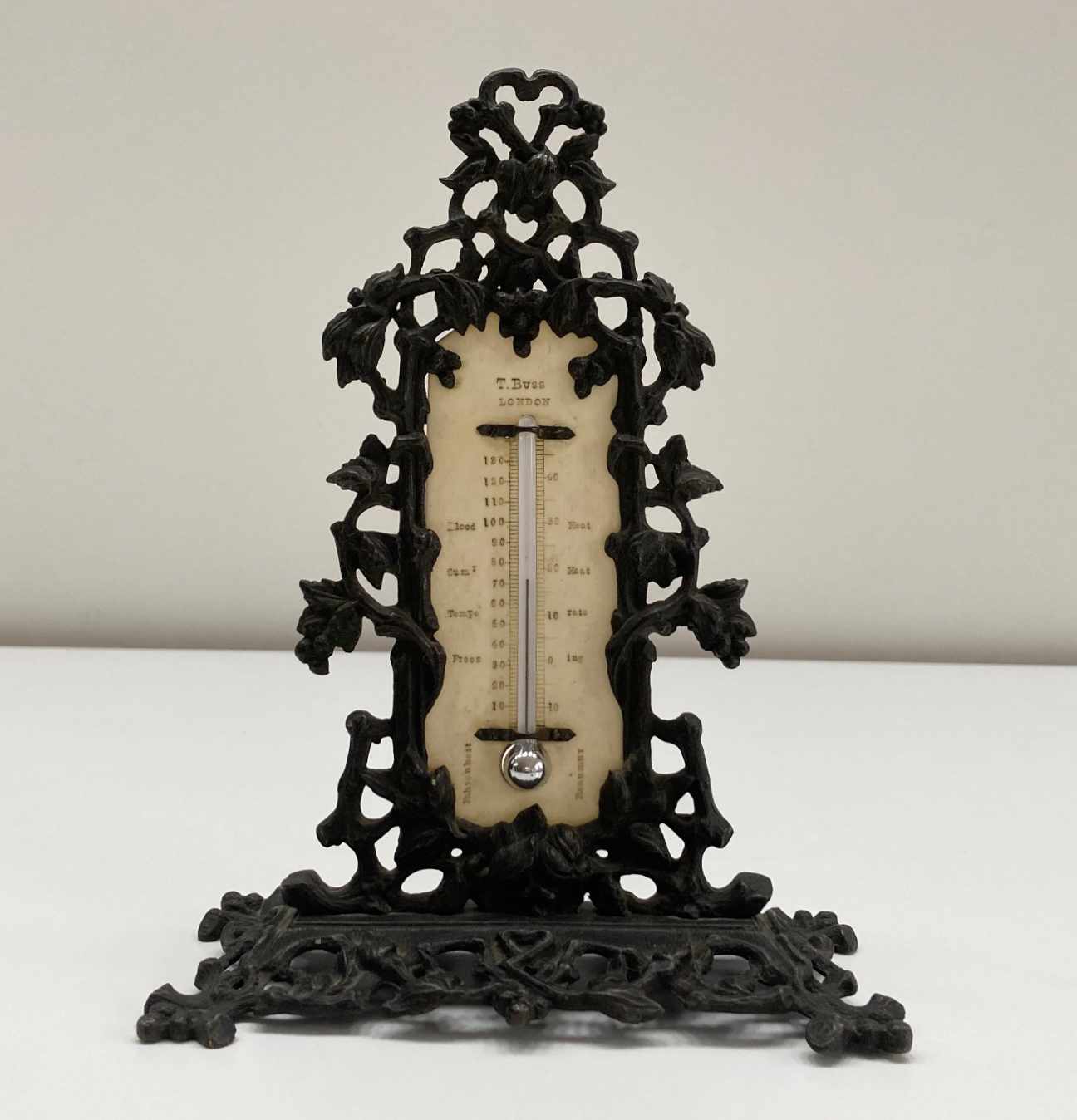 This beautifully decorative piece is cast from two pieces, both the base and the upright are similarly designed with entwined floral motifs throughout, The central section is left open and into which is secured an engraved scale plate for both Reaumur and Fahrenheit measurements on the thermometer. It is further engraved to “T. Buss, London”

Thomas Odempsey Buss (1797 – 1879) or simply Buss is a common name associated with hydrometer sets that are commonly encountered on the market but little information other than that and his place of business in Hatton Garden London seem to be well understood.

It is very likely that Buss served a London apprenticeship but he is noticeably absent from all of the main records. There is however, a record for his brother, William Hubbart Bowen Buss enlisting with Charles Robert West who had associations with both George Adams and the Dollond businesses. If the dates for the Buss’s parents are correct, it would also suggest that both of them had died by 1798 well before the brothers had reached the age to start work. The evidence would therefore suggest that they were at least well looked after following their demise.

Considering the normal age for apprenticeships and the seven years it took to complete, it must be assumed that Thomas Buss would have begun working at some time during the 1820’s. Without any concrete evidence, the most feasible possibility is that Buss may have worked for or supplied work to Robert Brettel Bate during this time. Even as late as 1891, his company continued to advertise themselves as successors to RB Bate, the original supplying company to the Government for Sikes hydrometers.

This could of course have simply been a nefarious advertising ploy but Buss’s dates seem to slign with Bates trading period and also the point in which Bate’s business was wound down in around 1850. At this point, numerous companies such as Dring & Fage, Ladd & Streatfield, J Long & JD Potter all of whose names can be found on existing hyrdrometers were vying to fill the vacuum that Bate left behind. Buss may simply have been another contender but his name is absent from the history of the Bate firm by Anita McConnell.

This thermometer is good dating evidence for Buss’s trading dates as it undoubtedly hails from the 1850’s. I have owned another early Negretti & Zambra example which can be reliably dated between 1850 and 1859 so we know that at this point, Buss was trading under his own name. Later adverts from 1924 also state an establishment date of 1850 for the company, the same year as Negretti & Zambra.

Both adverts although thirty years apart continue to proudly state that the company earned awards at International Exhibtion of 1862 (Honourable mention), The Sydney Exhibition of 1880 (Gold Medal) and the Melbourne Exhibition of 1881 (First prize award).

Given the long and continuous range of this company (at least 1850 – 1924), it seems baffling that such little information is available but it is clear that the Buss family were not simply makers of hydrometers but in fact had quite a wide ranging inventory.

This pretty example, dates from the earliest trading period of the company, circa 1855.