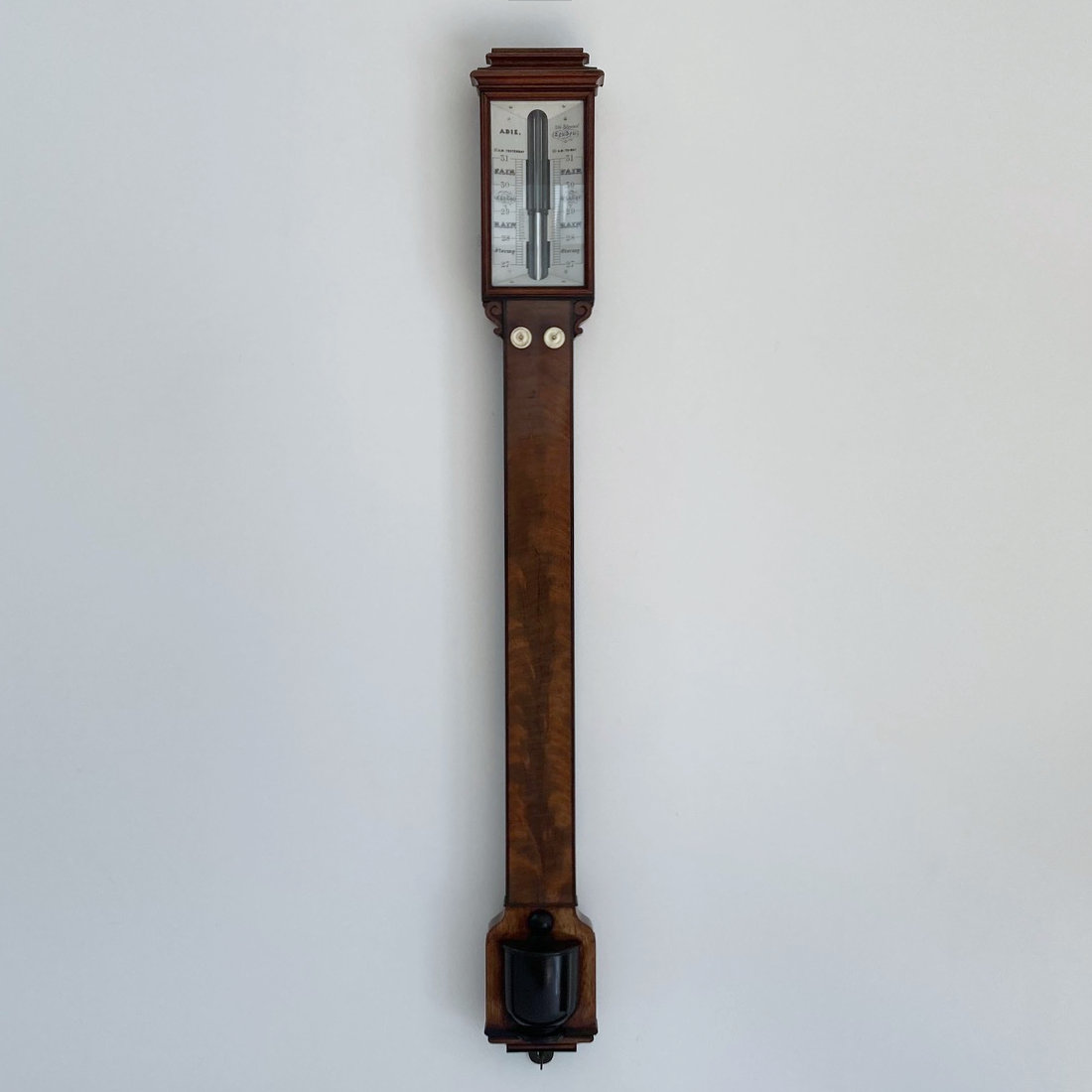 A very robust and stylish example by this most prestigious Scottish instrument maker, the barometer has a simple graduated pediment over a large glazed fronted, two part, inverted scale plate with a wide bore tube running up through the centre. The dial is engraved with a dual scale either side, measuring 27 to 31 inches of barometric pressure and with Gothic type weather indications at every half inch. The reason for two scales is made obvious as the top has the wording “10AM Yesterday” and “10AM Today” respectively. This simple but practical design would allow the observer to make comparison over two days by the placement of a precision Vernier scale either side operated by means of the two set knobs located under the dial.

The top of the scale is reserved for the maker, Adie and the address of 395 The Strand, London.

The dial flows down to the trunk through scrollwork supports either side and are met by a wonderful flame mahogany veneer running the full length to the cistern which sports a beautiful urn shaped cistern cover with ball lid and graduated end section with incorporated travel screw.

The maker of this precision barometer, Patrick Adie set up his business in 1844 at 395 The Strand, after serving apprenticeships with both his Father’s famous Edinburgh firm (Adie & Son) and the gas engineers, Milne & Son and specialised in the production of meteorological instruments. Through contacts made during his apprenticeship and training at Sir Thomas MacDougall Brisbane’s observatory near Kelso, Patrick made the close links with John Welsh Superintendent of The Kew Observatory that would eventually lead to the creation of the famous Kew Pattern marine & station barometers which were used extensively by The Met Office for years to come, a fitting development to his father’s earlier invention of the sypiesometer.

Adie himself developed a number of instruments during his lifetime including the first coincidence rangefinder used in astronomy. He exhibited numerous patent instruments at the Great Exhibition, The Paris Exhibition of 1855 and at the London Exhibition of 1862 and gained medals for his meteorological instruments. Close links were also garnered with the civil engineering industry, and his instruments were used as part of the great trigonometrical survey of India and in the construction of railways at home and abroad.

Adie eventually died in 1886 from bronchitis and heart disease and upon his death, the Institution of Civil Engineers (of which he had been a member since 1865) wrote:

“That Mr. Adie possessed great inventive power is shown by the fact that he took out no less than twelve patents, many of which are well known, and have proved very successful. One of these patents he was engaged in perfecting at the time of his death. It consists in the employment of corrugated steel belting, in lieu of leather, which he believed would effect a large saving both in power and cost. In this opinion he was supported by some eminent Members of the Institution, to whom he was well known, and who frequently sought the advice which his great experience enabled him to give.”

His business continued until 1942 presumably under family ownership although the latter history of this London firm remains largely unclear. Adverts from this later period for cement making machines suggest a closer association with industry rather than retail.

A superb example of Adie’s early work from his first known London address. The barometer sports the finest materials and was also fitted with a very large and robust tube with a large bore, the effect of which gives superb presence on the wall.