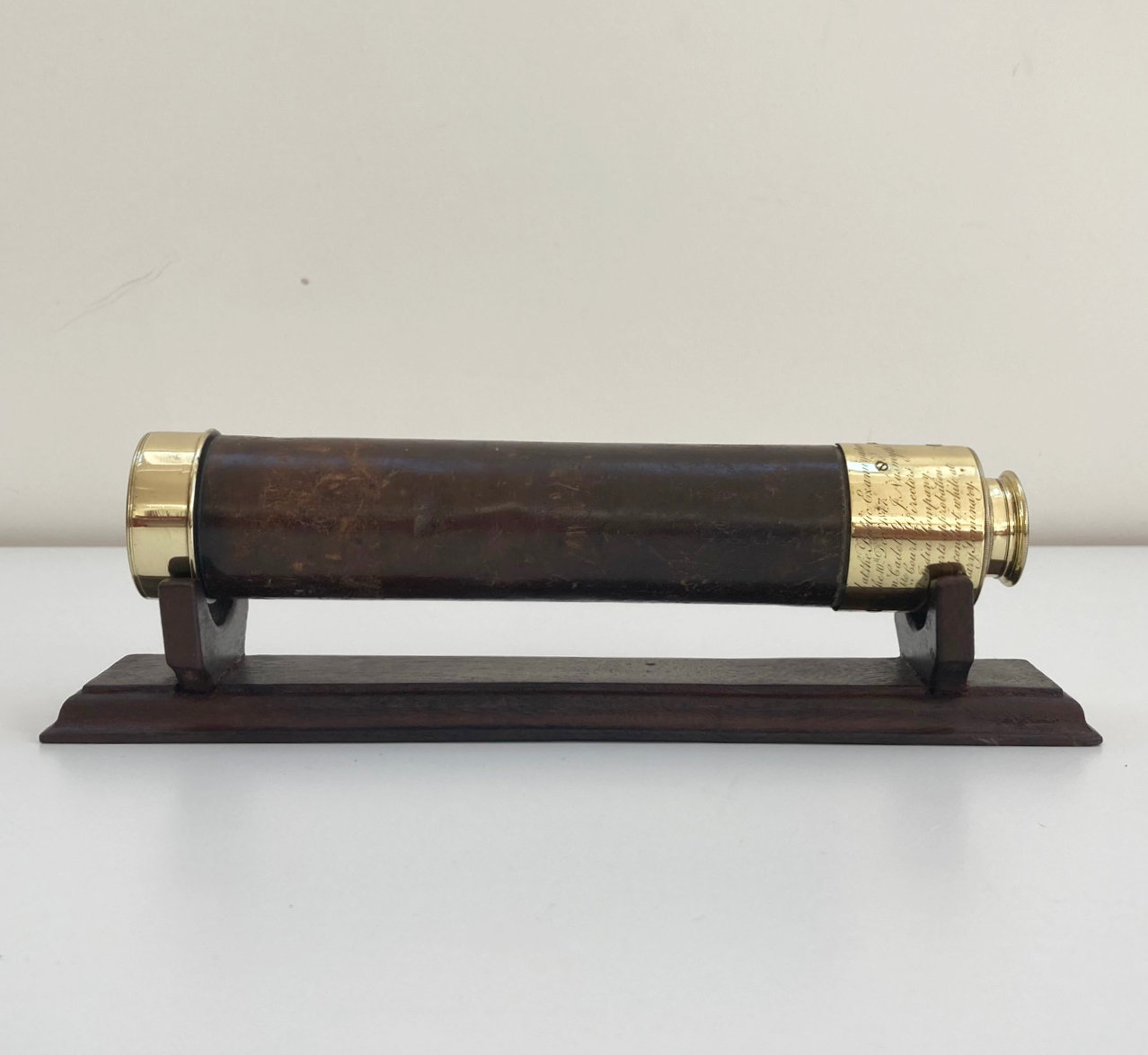 For sale, an early Victorian three draw telescope by Dollond of London with extensive presentation engraving to Cadet DJ Nasmyth from The East India Company December 1847.

This handsome three draw telescope with leather covered barrel, measures 73cms extended, 24cms closed and has an inch and a half objective lens. The first draw has its original dust slide to the eyepiece and is engraved to the famous instrument making form of Dollond London.

Around the collar of the barrel is affixed a brass plaque which bears an inscription. Perhaps one of the largest inscriptions I have seen on a telescope of this size which explains why such an addition was required. It reads:

“Presented at the Public Examination on the 10th Dec 1847 to Gentleman Cadet D.J. Nasmyth by the Honourable Court of Directors of The East India Company as a mark of the Courts approbation of his general good conduct while at the Military Seminary.”

In 1809, The East India Company separated from the Royal Military Academy at Woolwich and established a Miltary Seminary of its own at Addiscombe Place in Croydon to train its cadets in the science of gunnery and engineering. Examinations were held twice a year at Addiscombe and they culminated in a public examination, an inspection and the the distribution of prizes (such as the telescope in question). Vibart in his book, Addiscombe: its heroes and men of note provides an account that the event was, “a performance carefully prepared and rehearsed beforehand. Its object was to make a favourable impression on a creafully selected audience.” During Nasmyth’s ceremony, the exam board would have included Major-General Charles Pasley, The Director’s of The East India Company and the Archibishop of Canterbury.

The Seminary closed after The Indian Mutiny in 1857 and was brought under the control of the military and the Government. It was finally sold off in 1861.

The cadet in question was David Jobson Nasmyth, son of the eminent dental surgeon Robert Nasmyth who was instrumental in founding what became the Edinburgh Dental Hospital and School. Born in 1829 in Edinburgh, Nasmyth would have been just seventeen when this telescope was bestowed upon him by the East India Company. Shortly afterwards, he entered service with The Company joining The Bombay Engineers and alongside the Madras & Bengal engineers were largely responsible for all civilian and military infrastructure projects during the early Victorian period. He was promoted Lieutenant in 1854 and became Captain in The Royal Engineers in 1858, a year after The Indian Mutiny. The decision was taken to amalgamate all of the East India Company Engineers under The British Army for reasons of continued security in 1857.

It is likely that Nasmyth transferred to Australia during the mid 1860’s and he reached the rank of Lieutenant Colonel in June 1868. He remained there for the rest of his short life and his death is registered in Adelaide in December of 1872.

A formal entry for the period reads.

14th December – The Will with a Codicil of David Jobson Nasmyth formerly of Bombay in the East Indies a Captain in the Corps of Royal Engineers on the Bombay Establishment but late of Adelaide in the Colony of south Australia a Lieutenant Colonel in the said Corps who died 30 Spetember 1871 at Adelaide proved at the Principal Registry by Louisa Brown Nasmyth of 6 Burlington Road, Westbourne Park in the county of Middlesex Spinster the sister the surviving executor.”

Sadly there is little information as to how Nasmyth’s death came about at such a young age but it is likely that disease or illness was probably the cause. Some papers that seem to relate to his financial affairs in India do also exist at The National Archive (Ref: J90/1770) so a little more research may shed further light on his time in India during this historic period.

The Nasmyth family is an interesting one. As mentioned earlier, David’s Father was an eminent Dental practitioner and Member of The Royal Society of Edinburgh and his older Brother Charles also had an interesting career. Like his younger Brother, Charles became an Engineer in India but whilst on a sabbatical due to ill health took a position with The Times as a News Correspondent.  He seems to have joned the British and Ottoman armies in the Crimea in 1854 and by chance found himself embroiled in the Siege of Silistria. Following the death of the Turkish Commander, Nasmyth and Captain James Butler of the Ceylon Rifles took command of the forces and successfully held the siege until the Russian’s withdrew for fear of additional allied forces arriving. He was afterwards dubbed the “defender of Silistria”. On rejoining the Engineers, Charles seems also to have made his way to Australia but his ill health continued to affect him and he died in Pau, France in 1861 at just 35 years old.

The makers of this telescope, Dollond, were set up in Hatton Garden in 1750 by Peter Dollond with his father John joining him shortly after. John Dollond’s invention of the achromatic lens (although bitterly disputed) led to his award of the Copley Medal by The Royal Society in 1758 and following this success, Dollond moved to The Strand where the company was appointed optician to George III and the Duke of York in 1761.