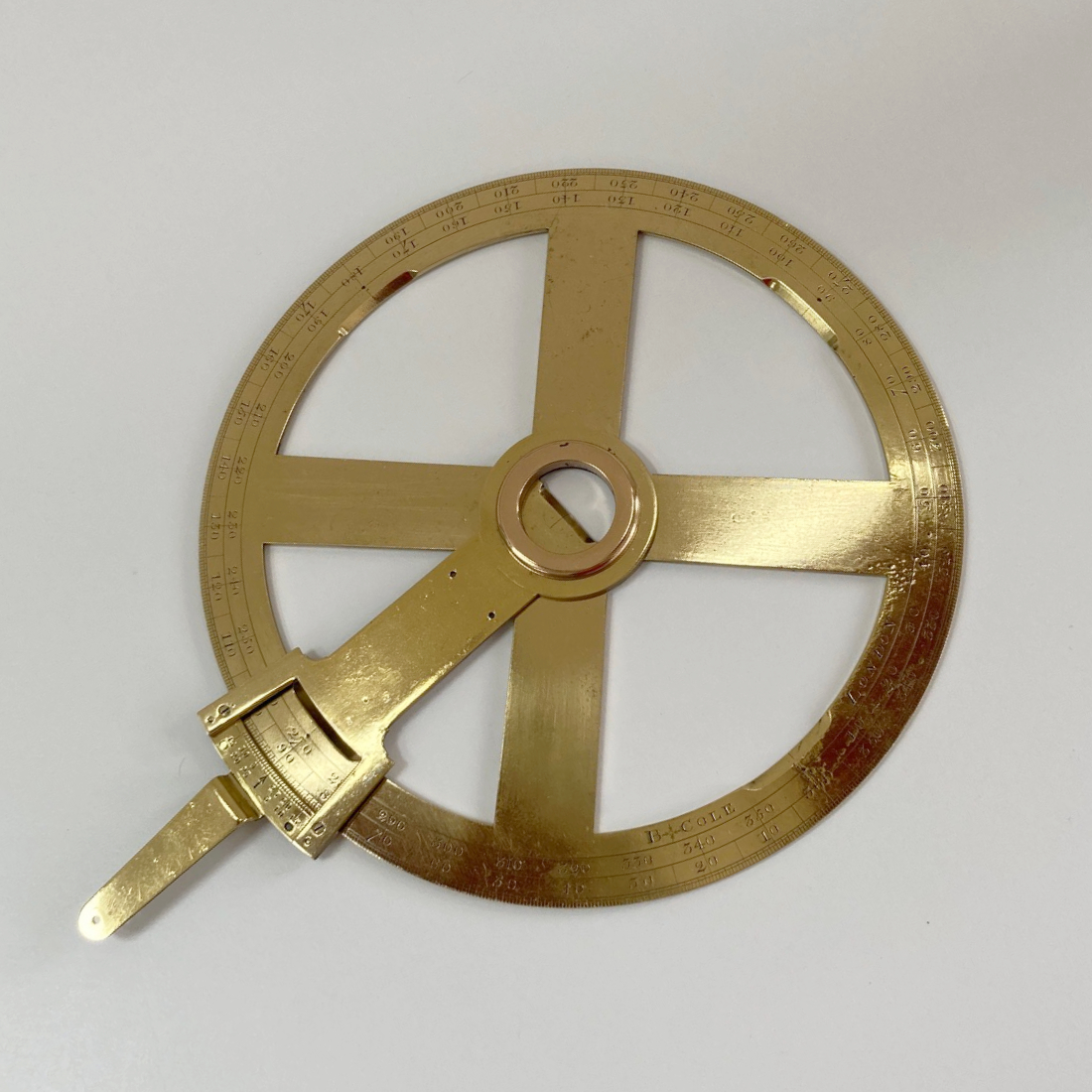 Comprised of a circular brass frame measuring 7 ¾” in diameter, it is divided into 360 degrees with degree numbers running both clockwise and anti-clockwise around the circumference. Four strut arms at 90 degree intervals terminate to the centre with a semi-circular opening with centre mark for accurate positioning of the instrument.

The centre is further fitted with a swing arm which rotates around the full 360 degrees and contains a Vernier which is placed over the outer scale to allow detailed measurements to the nearest minute of arc. The protractor is further engraved with the name, B. Cole London.

The Cole business began with Benjamin Cole senior, the son of an Oxford bookbinder and engraver. Cole was born in 1695 and although there is some uncertainty about his early apprenticeship, it is likely that he was taken in by the renowned London instrument maker, Thomas Wright who traded from The Orrery & Globe in Fleet Street and who held a Royal Appointment for King George II. It is however certain that Cole worked for Wright during his formative years.

At some point during the 1730’s, Cole left Wright’s employment and began business on his own account, trading from an address at Bull Alley in Lombard Street. He was certainly independent by 1739 as he took his son, Benjamin Cole junior as an apprentice and shortly after the completion of his training in 1748, the business of Cole senior’s former master Thomas Wright was purchased. With a new premises at the sign of the Orrery in Fleet Street, the business became Benjamin Cole & Son and remained so until the death of Cole senior in 1766.

Cole Senior was a maker of high repute during his lifetime although his training and subsequent take over of Wright’s business did not achieve him the transfer of the Royal Appointment to George II, this was supposedly retained by Thomas Wright even after retirement. Neither did he manage to achieve the patronage of such institutions as The Royal Mathematical School or The Office of Ordnance. These latter accolades were reserved for his rival George Adams (Senior) who was evidently better at both advertising and self publicity.

This rivalry is evidenced by Adam’s release of a publication of his “Description and Use of a New Sea Quadrant” in September of 1748. Previously in June of the same year, Cole had advertised the same thing stating in his adverts that:

“Benjamin Cole, Mathematical Instrument maker, at the Orrery in Fleet Street, London has invented a new quadrant for taking the sun’s altitude at sea, in a manner more easy and correct than by any other instrument in common use.”

In December of the same year, both parties repeated their adverts but Cole decided for a public airing of his grievance.

“As the judicious are not puffed into a belief, which shall in prejudice of one man favour another’s claim to an invention, therefore the public are left to determine, whether any modern quadrant, published the latter end of September last, is not a manifest copy of that of Mr cole’s published the beginning of June last, with only the addition of Mr Godfrey’s vane.

As Mr Cole is the sole inventor of the above quadrant, and first published it many months since, he thinks it his duty (to prevent the public from being deceived) to inform them that Cole, inventor and maker is stamped thereon, to distinguish it from any other pretended invention whatsoever.”

To further prove his frustration, Cole was later emboldened to include a direct character assassination on Adams, but it is evident that Adams himself remained unconcerned, presumably buoyed up by his success. He was certainly not unused to accusations of plagiarism.

Nevertheless, Cole left a legacy of high-quality manufacture and his son continued to operate at the top of the instrument making industry throughout his years of trading. Cole Junior is also known to have garnered a close working relationship with the young John Troughton in the latter part of the 1770’s and this eventually resulted in the sale of the Cole business to Troughton in 1782.

To provide some perspective of its success over its years of trading, Benjamin Cole lived until 1813 spending thirty years in retirement. Even after so many years, he left a considerable fortune to the recipients of his will.