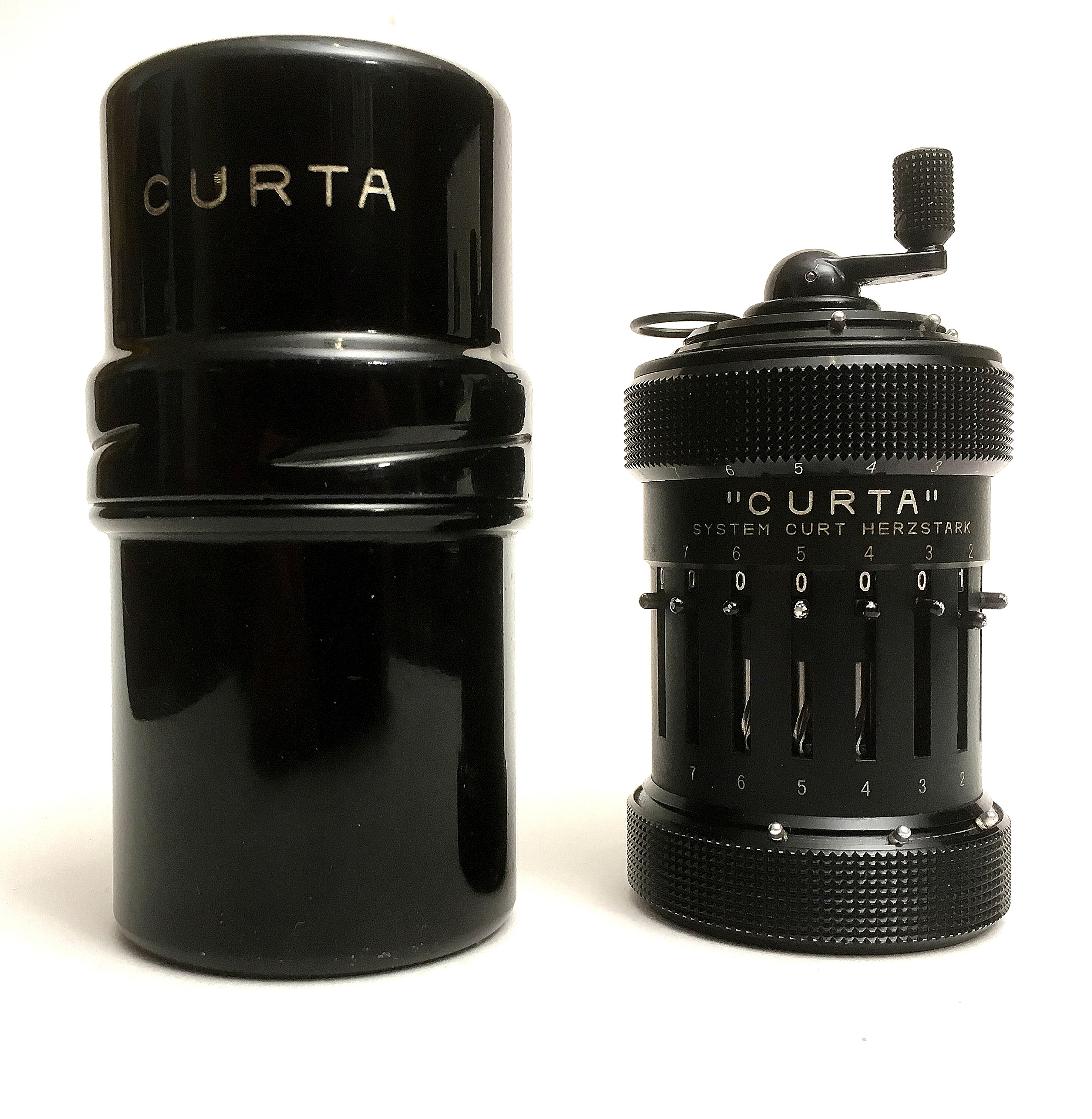 one of the oldest known Curta TYPE 1

(early model with round “pin style”)

In perfect original and working conditions, it come with the original case.

There is a little irrelevant defect, the top  pin of clearing ring is broken.       (see last photo)

These lists were produced by a former Curta Factory worker. Thanks to Hans for providing them.

Before there were electronic calculators, home computers, or calculator applications, there were mechanical calculators. Now highly collectible, Curta calculators were the best portable mechanical calculator available until the introduction of electronic calculators in the 1970s. These clever devices have a fascinating history, intersecting with major events of the 20th century, and are a must-have item for any collector of vintage calculators or retro technology. Invented in Austria in the 1930s, inventor Curt Herzstark’s imprisonment in a Nazi concentration camp delayed their development. After the war, Herzstark found a manufacturer in Liechtenstein, and had a production run until 1970. Using a hand-cranked mechanism, users could perform addition, subtraction, multiplication, and division, and even some complex operations like square roots. Thanks to their durability, many of these calculators work just as well as when they were new.

Herzstark was born in Vienna, the son of Marie and Samuel Jakob Herzstark. His father was Jewish and his mother, born a Catholic, converted to Lutheranism and raised Herzstark Lutheran.

In 1938, while he was technical manager of his father’s company Rechenmaschinenwerk AUSTRIA Herzstark & Co., Herzstark had already completed the design of the Curta, but could not manufacture it due to the Nazi German annexation of Austria. Instead, the company was ordered to make measuring devices for the German Army. In 1943, perhaps influenced by the fact that his father was a liberal Jew, the Nazis arrested him for “helping Jews and subversive elements” and “indecent contacts with Aryan women” and sent him to the Buchenwald concentration camp. However, the reports of the army about the precision-production of the firm AUSTRIA and especially about the technical expertise of Herzstark led the Nazis to treat him as an “intelligence-slave”.

His imprisonment at Buchenwald seriously threatened his health, but his condition improved when he was called to work in the factory linked to the camp, which was named after Wilhelm Gustloff. There he was ordered to make a drawing of the construction of his calculator, so that the Nazis could ultimately give the machine to the Führer as a gift after the successful end of the war. The preferential treatment this allowed ensured that he survived his stay at Buchenwald until the camp’s liberation in 1945, by which time he had redrawn the complete construction from memory.