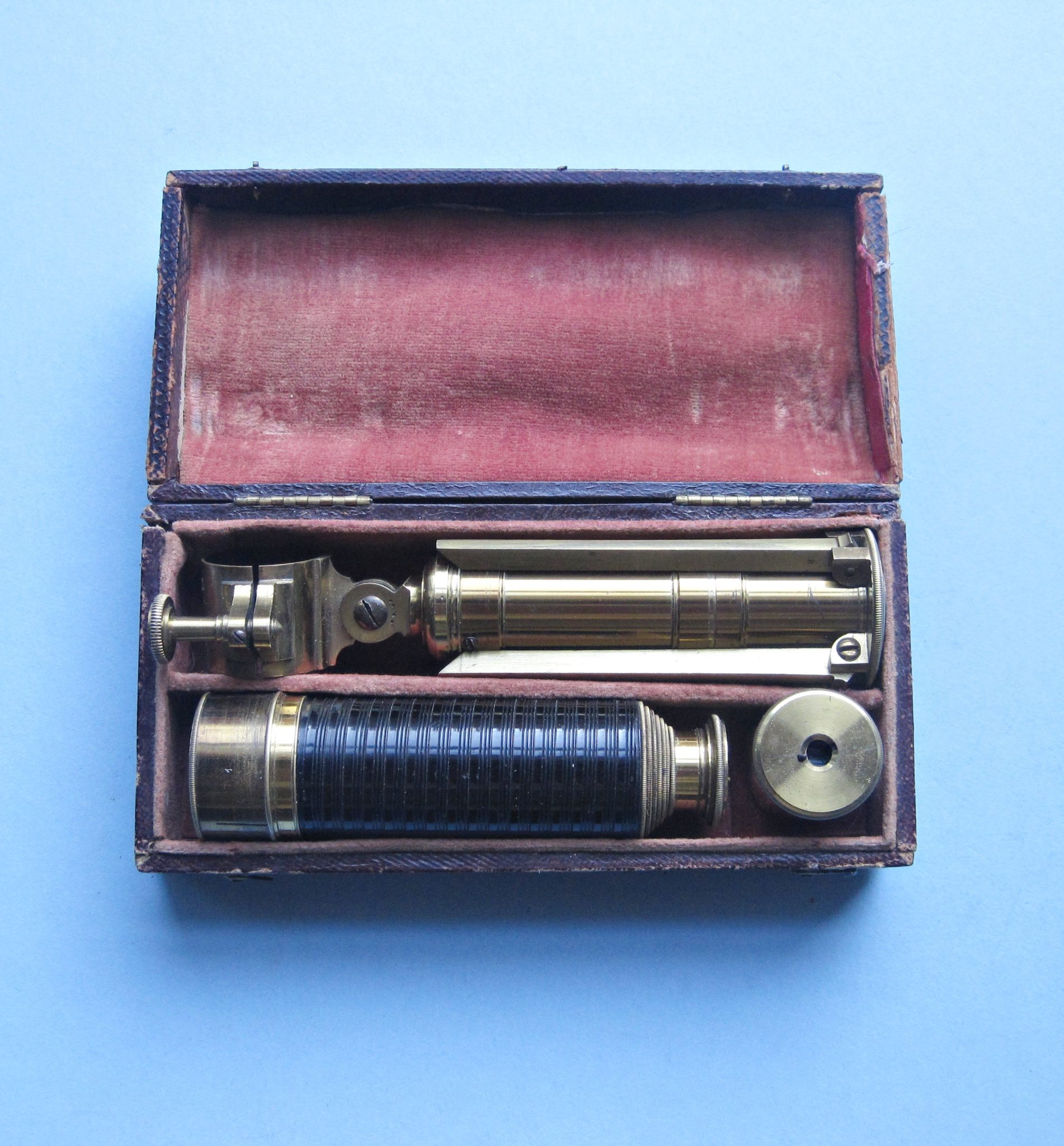 A fine small six-draw , table-top, telescope with baleen-covered barrel and lens cover, folding tripod stand and spare eye piece. Retains most of its original lacquer. Length of scope fully extended: 16 inches, closed: 4 inches. Maker is J.D. Potter, who apart from being an instrument maker was official chart maker to the Admiralty.. It is engraved: “J.D. Potter/Successor to  Bate/Poultry/ London/To adjust by sliding in the second draw”.  Quoting Brian Stevenson:

“John Dennett Potter was born on June 13, 1810 in the Pentonville area of metropolitan London. I found little about his childhood, other than that his parents names were Charles and Elizabeth. Potter fathered a son, also named John Dennett Potter, during the summer of 1836. He married the mother of the son, Sophia Parkes, on April 12, 1838. Cohabitation before marriage, and children out of wedlock, were both very common in those days in England. However, two important pieces of information on Potter’s life come from those records: his financial situation was sufficiently stable by the spring of 1838 to take a wife, and the baptism record of his son described the father’s occupation as “optician”. In 1850, Potter was described as having been Robert Bate’s “shopman”, so it is likely that he had been a trained optical worker by 1836, and Bate’s shopman/foreman by 1838.Consistent with the above conclusions, the 1841 census recorded that John, Sophia, and three sons lived in Peckham, Surrey. They employed a 14-year old girl as a live-in servant, indicating a certain amount of wealth.

In addition, living in Surrey, instead of near the London shop, indicates that Potter enjoyed a lot of independence from his work. Robert Bate’s son John, who had been a major contributor to the business, died in 1840. Those circumstances suggest that John Potter probably took over the business role that had been filled by John Bate.Robert Bate died in December, 1847, leaving a substantial estate of £14,000. His widow managed the business for a couple of years, but sold it off in the summer of 1850. Potter acquired right to publish charts for the Admiralty. Beginning in 1850, Potter began publishing the nautical charts that had previously been sold by Bate. However, the 1851 census recorded Potter’s occupation as “optician”. The 1861 and 1871 censuses stated that same occupation. Those declarations suggest that Potter viewed his optical goods as his major products for several decades. Only in 1881 did Potter describe himself as being a “publisher”. According to Gloria Clifton, J.D. Potter purchased membership in the Spectaclemakers’ Guild in 1853. Numerous pieces of scientific and engineering apparatus are known that bear J.D. Potter’s name, many of which were probably made in his shop (e.g. Figures 2-11). John Potter died on September 17, 1882, at his home in Croydon, Surrey. He left an estate of over £70,000.”