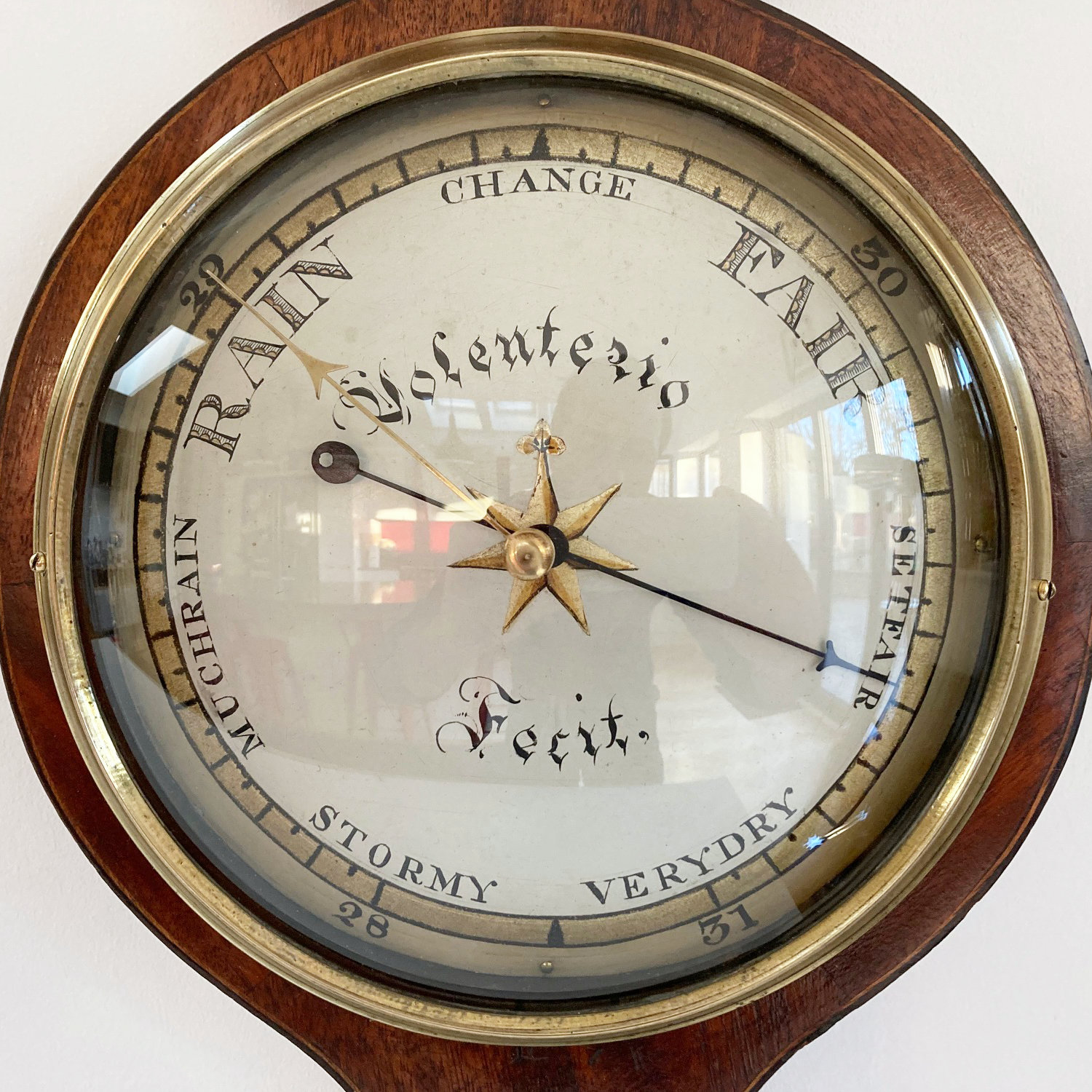 For sale, an early Nineteenth Century wheel barometer with a unique painted dial by Volenterio of Doncaster

Comprised of a mahogany veneered case with broken arch pediment and central urn finial. The barometer neck holds a twelve inch silvered thermometer scale with spirit thermometer reading for 0 to 120 degrees with inlaid shell motifs either side. Further floral inlay are provided above the thermometer and also at the base.

So far described is a typical regional example of this barometer style until you consider the dial itself. Enclosed behind an eight inch brass bezel with convex glass lies a rather unique dial. The dial plate itself is comprised of a highly unusual convex plate. In addition, the dial is entirely and very beautifully painted. It measures 28 to 31 inches of barometric pressure with a gold painted scale around the outer circumference. Around the inside of the scale, weather indications are further provided with the Rain and Fair indications enlarged and embellished with black and gilt paint. The centre of the dial is adorned with a fine pointed gilt star motif with fleur de Lys at the upper most point and the words Volenterio Fecit (essentially Latin for “Volenterio made it”) above and below the centrepoint.

The dial is completed with a fine blue steel pointer and has another unusual addition of a brass set hand operated by a knurled brass turn to the centre of the glass. This feature is more commonly seen on aneroid barometer whereas wheel barometer usually have a set knob underneath the dial.

The culmination of all of these dial features provide a very pleasing aesthetic and a sense of depth that can’t be achieved from a flat silvered dial. A supremely interesting oddity amongst the normal canon of its type.

Little is written about the maker Volenterio, presumably he was one of the hundreds of Italian emigres that arrived from Northern Italy during the late Eighteenth Century and early Nineteenth Century who positively influenced the style and design of British meteorological instruments. The only makers of this name recorded are a G Volanterio and a Joshua Volanterio who traded in Doncaster between 1815 and 1841 and it is reasonable to assume that they were Father and Son. Although other examples of their work are relatively scarce, no other extant examples bear this unusual signature dial plate so it is enticing to consider that this was produced as one off.

Although not a particularly rare barometer style, the addition of the painted dial makes this example both intriguing from the point of the study of barometers but completely original. It is likely that Volenterio looked to mimic the fashion for painted dial longcase clocks which were prevalent in the regions of England at the time.