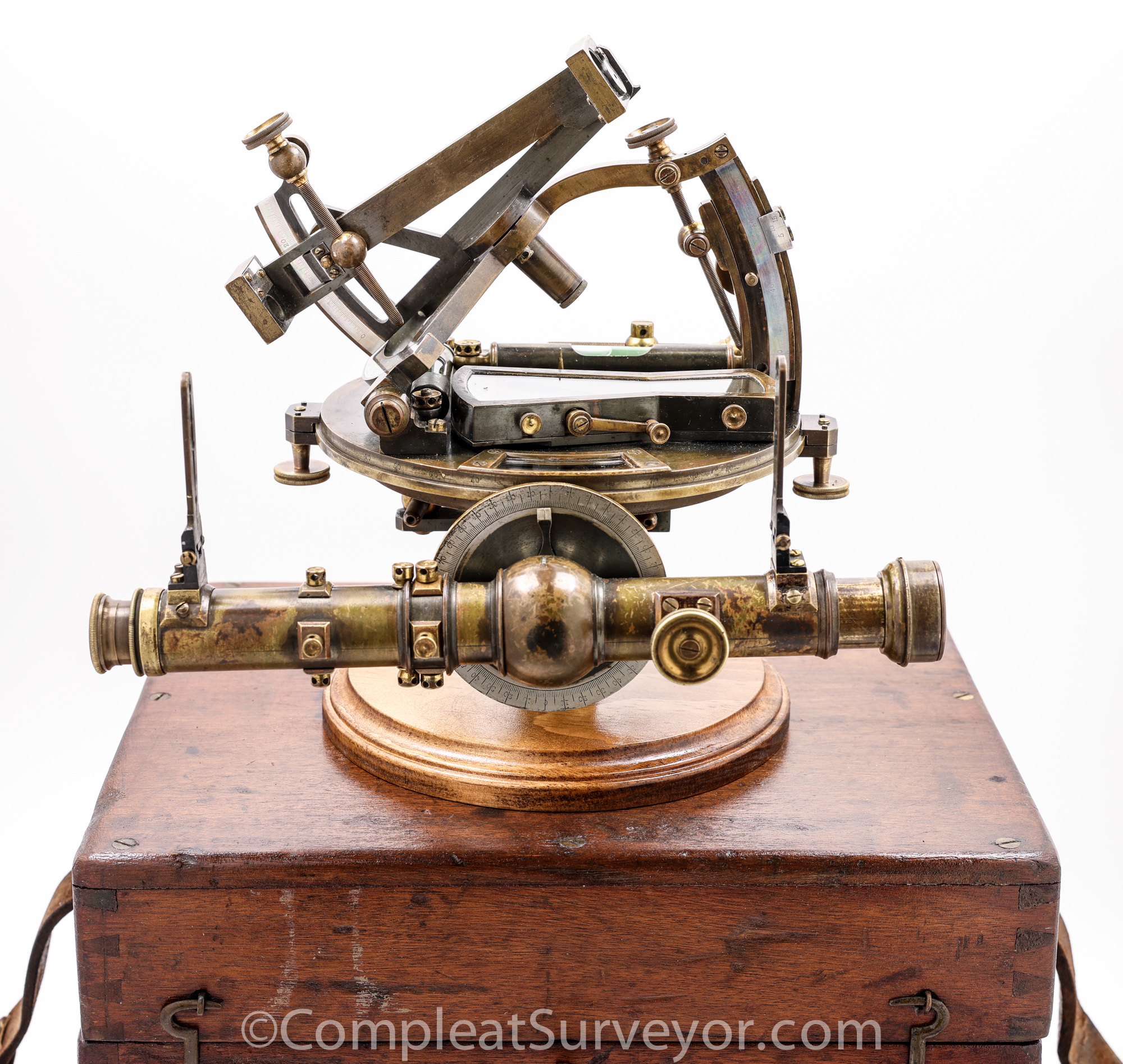 This is the only privately-owned Gurley Solar Telescope Compass (STC) known. For the reasons discussed below, the STC offered here should be a Top of The Bucket List item, and it is very unlikely that you will ever see another one offered for sale.

Gurley apparently did not sell many STCs. Gurley started offering STCs for sale in its 1858 Catalogue, sold very few instruments of any kind during the Civil War Years (1861 to 1865), and then stopped selling the STC in 1870 or 1871 (based on statements made in the Gurley 1873 Catalogue).

A side mounted telescope that could measure vertical angles no doubt seemed like a winner in 1858. The telescope allowed for longer sightings, while eliminating the sight vanes and supporting arms saved both size and weight. The side mounted scope had two shortcomings, however. First, the surveyor would have to take the offset nature of the telescope into account each time the surveyor measured an angle – Gurley provide instruction in its catalogues regarding that. Second, the side mounted telescope tended to unbalance the instrument. This was a fatal flaw. Surveyors objected to the unbalanced nature of the STC, which apparently reduced the demand for the instrument enough so that the STC was no longer commercially viable.

(You can read Gurley’s 1873 statement about discontinuing the STC a few years before here).

The bottom line…Gurley sold very few STC’s, and only two Gurley STC’s are known to have survived. I understand that the other known STC is a very nice instrument as well and is held by a historical society. I also understand but have not confirmed that it has a replacement telescope.

This STC is blessed with two known owners: William H Byars and Byron B. Herrick Jr.

Byars named appears twice on box lid – once stamped on a Roach label, and again on a label for the newspaper that Byars published. Roach apparently worked on this instrument in 1879 (see pic of showing Roach and an 1879 date). So Byars stated the Roach label in 1879 or thereafter. Byars sold the newspaper in 1882 or so. So it’s clear that Byars owned the STC after 1879 and before 1882.

I believe but don’t know for sure that William Byars was actually the original owner of this STC. Byars started his surveying career in 1869 or 1870, while the STC offered for sale here was made in April 1869 (see pic below showing the name of the Gurley engraver with the date April 1869). So the timing lines up for Byars to be the original owner.

I also believe that Byars sold the STC to Byron Herrick in 1892 (see pic showing Herrick’s 1892 engraving). Byars became the Surveyor General in Oregon in 1892, so his days of hands-on surveying were pretty much over. So Byars owning the STC until 1892 makes sense as well.

Byars was a fairly well-known fellow in Oregon. He had some incredible adventures during his younger days, and owned a number of newspapers over his lifetime.

Byron B. Herrick was the next owner. He surveyed on a crew with William F Byars (the son of the owner of this STC, William H. Byars) in 1891, and then purchased the STC from William H Byars in June 1892. Herrick was elected Marion County Surveyor right before then, a position that Byron apparently held for 42 years. Byron also served as a special examiner of surveys in 1893-1894.

This STC took a fairly hard knock at some point. I had the STC professionally repaired, and it looks and works great. You will not be disappointed in the quality and condition of this instrument. You really should look at the 360 Degree Spinner View – With ZOOM View to appreciate this instrument fully.

Worth noting…the STC did not have the two horizontal plate clamps when I picked it up. If you look thru some old Gurley Catalogues, you will see an illustration of an earlier style STC that did not have the plate clamps. Other illustrations show the plate clamps, however, as the pic attached below demonstrates. I concluded that this STC originally had the plate clamps because (1) the bottom plate had drill holes where the clamps went and (2) the storage box has carve outs for the clamps. So I had my professional repair guy make two clamps for this STC. I think the clamps look great, and blend in nicely with the instrument.

So I think this is a very unique opportunity to own one of the coolest surveying instruments made in America.