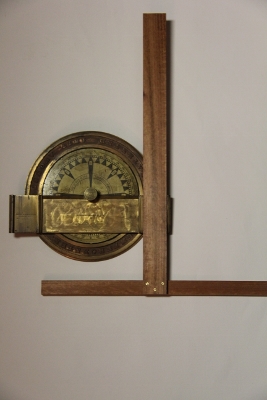 An important signed and patented plotting instrument by Henry Wadsworth-1877

An important, one off, patented plotting instrument-circumferenter by Henry Briggs Wadsworth of Massacusetts, USA. 1877.

Composed of a heavy, cast bronze base with name of the instrument, maker, country of origin and date,  including the highly engraved, machined brass arms to accomodate the professionally re-constructed T-square (to scale) as proposed in the copy of the original patent, granted Aug. 21, 1877 and applied for Apr. 19, 1877.

The inner workings are a large paper compass with cardinal points and engine divided 360 degree circle in four 90 degree quadrants and further divided into one degree levels of accuracy (minor scuffs and scratches to paper but intact and profusely illustrated and signed). The entire compass is turned by a large brass central knob. The instrument was proposed to be desk mounted with three screw holes and brackets, if necessary (although by it’s mass it would never move). The T-square can ingeniously be used in one of 4 positions for plotting on a large map for navigation.

Complete and functional, this instrument was obviously the crowning achievement of Wadsworth as he had the base cast from a mould that could be mass produced with all of the details of the invention included. Note the odd spelling of CIRCUMFER(C)ENTER on the casting base. The number sold (if any) is unknown.

A copy of the original patent, with instructions for proper use, is included. Base is 8 inches in diameter, 10 inches with the arms and the exotic wood, T-square is 18 x 14 inches.

Mark Hacking (Scientifica Opticae Inc.) has been an avid collector/dealer for over 30 years. A former Science teacher, he has an innate love for anything natural or mechanical. Specializing in optical (microscopes, telescopes), surveying, medical, weighing and drawing instruments, he is an active participant of the Scientific Instrument Fair in London. Living in Stratford, Ontario, Canada, with his wife and two children; Mark looks forward to meeting as many fellow collectors as possible, and has a worldwide following on eBay (Sciopti).