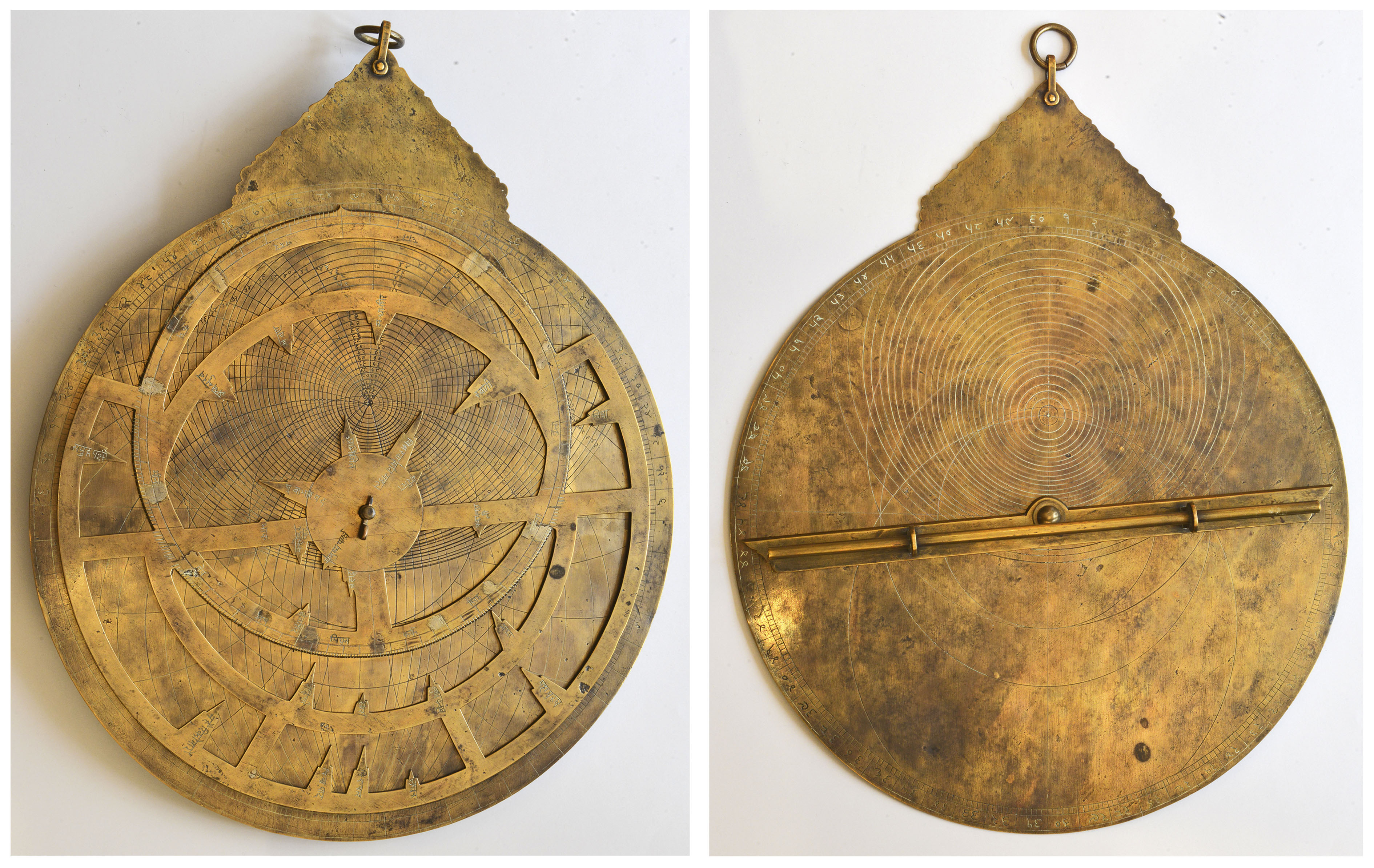 Lahore School, first half of the 19th century

The front, rete side, corresponds to the latitude of about 33° (probably Islamabad) with almucantarats engraved and numbered every 2 degrees and lines of azimuth that extend below the horizon. Also engraved are the circles of the two tropics, those of the equator and the ecliptic as well as the lines of unequal hours (below the horizon), the line of the equinoxes and the one of the solstices. On the periphery, there is a graduated scale of 360 lines grouped in sets of 6, of which only the upper part is numbered, from 0 to 90° in the upper-left and 90° to 0° in the upper-right. The throne, triangular and plain, has no inscription.

The back, alidade side, corresponds to the latitude of about 30° (probably Quetta or Dehradun) with almucantarats engraved every 3 degrees but without lines of azimuth, except the one of the East-West meridian passing through the two vernal points corresponding to the azimuth ± 90°. There are also the circles of the two tropics, the equator and the ecliptic, as well as the lines of equinoxes and solstices. On the periphery is engraved a scale of heights graduated from 1 to 60 with 6 internal divisions, each corresponding to one degree, ie 6 x 60 = 360°. The alidade is fitted with a sighting-tube, all in brass, an axis, a horse and a ring complete the set. Note that on this face, mathematically of perfect construction, the different lines are more accurate than on the other side.

The rete :         well constructed and engraved, it is characteristic of Indian models with the circle of the equator materialized. It has 25 stars marked by dagger-shaped pointers, a feature of the 18th century and the first half of the 19th century. All the stars are named in Sanskrit as well as the signs of the zodiac. The ecliptic is divided into degrees which allows a great precision in the reading of the mediation (position) of the stars. Note that the mediation of the stars with respect to the ecliptic corresponds to a period prior to 1800 meaning the use of an old star-catalog without correction of precession of the equinoxes.

Notes :               This astrolabe, very large compared to the usual models, was probably made for a mosque or a university (astrolabe for education). The latter possibility is the most plausible because the instrument has two plate tracings, one complete (front), and the other partial (back) necessary for a good understanding of the construction of the different lines of the stereographic projection. Note also that the rete has been cut more widely for increasing rigidity and allowing more manipulations.

After 37 years in Le Louvre des Antiquaires, the Delalande gallery moved early June 2015 to 35 rue de Lille, 75007 Paris, on the other side of the Seine River in the well known antic shops area "le Carré Rive Gauche".
Our main specialties are, since 1976, Marine and Scientific instruments, Tobacco and Opium objects, Curiosities and Great Canes.
We participate to international antique fairs (TEFAF Maastricht) and are unique partner of the French Maritime Museum.
Eric Delalande is also Administrator of the French Experts National Company (C.N.E.).
Please visit also our two websites, which are frequently updated: www.antiquites-delalande.fr (French) and www.delalande-antiques.com (English). ----------------------------