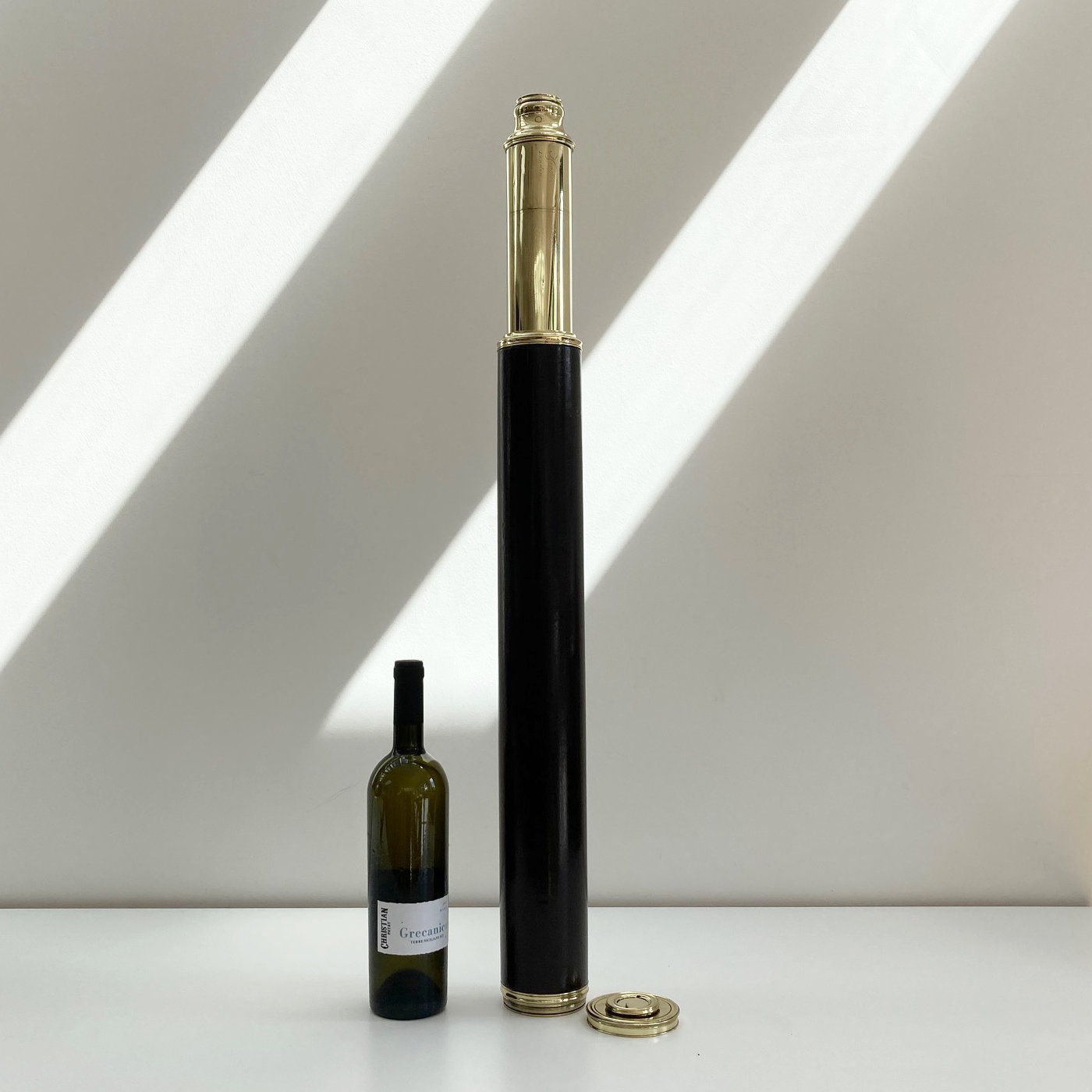 This rare type of maritime or navigational telescope was designed specifically for night observations or for poor light conditions and its size and lens structure was produced accordingly.

A contemporary publication of 1828, “The Panorama of Science & Art” by James Smith describes the night glass in the following way:

“The telescope called a night glass is nothing more than the common astronomical telescope with tubes, and made of a short length, with a small magnifying power. Its length is usually about two feet, and it is generally made to magnify from six to ten times. It is much used by navigators at night, for the purposes of discovering objects that are not very distant, but which cannot otherwise be seen for want of sufficient light, such as vessels, coast, rocks etc. From the smallness of its magnifying power, and the obscurity of the objects upon which it is employed, it admits of large glasses being used, and consequently has an extensive and well enlightened field of view”.

This Lincoln example has a large three inch objective lens conceived to allow as much natural light to enter the barrel of the telescope as is possible and an eyepiece containing a further two lenses in a short draw tube with no backstop as is typical of the form. The combination of lenses presents an intentionally inverted image as an additional erector lens would also reduce the overall power of the instrument and thus defeating its purpose.

The telescope measures 69cms when closed and 87cms when drawn to its full extent. The main body is comprised of a stained mahogany barrel with the single draw engraved to “William Heather”. It also retains its original screw off objective lens cap with integral dust slide to enable use with the cap on and it has a dust slide to the eyepiece.

Upon examination from the reverse, the latter dust slide also provides an unexpected surprise with an engraving stating Lincoln London, indicating that the telescope was in fact made by the renowned London maker, Charles Lincoln. The suggestion is further strengthened by the fact that both Heather and Lincoln were operating from Leadenhall Street during the same period, so Heather must have acquired goods from him for resale.

William Heather’s trading dates span a short period from 1793 to 1812. He was apprenticed to the engraver and stationer, George Mitchell in 1780 but accounting for a seven year training period, his activities are less well documented in the lead up to his arrival at 157 Leadenhall Street, a premises from which he traded throughout his entire remaining career.

The address is perhaps not immediately obvious but it formed part of The Navigation Warehouse which saw huge trade from its close proximity to The East India Company’s Headquarters. It was also the premises for John Gilbert the Younger and the partnerships of Gilbert & Wright and later Gilbert & Gilkerson. Heather’s arrival at the address was prompted by his take over of the chart publishers Mount & Page. His trade card of the period states that he sells “sea books, charts, sextants & all kinds of nautical instruments.”, so it is clear that although his main focus was printed materials for mariners, he also sought to embellish his stock with instruments worthy of his clientele. It is certain therefore that Charles Lincoln was one of his suppliers.

Heather also employed John Norie at Leadenhall Street and there is some suggestion that Norie was initially a teacher at the Naval Academy being run from the Heather’s premises. The relationship was seemingly a cordial one as Norie is known to have published his own books on seamanship during this period and even named one of his sons after his employer (William Heather Norie). Upon Heather’s retirement or death in 1812, he became the obvious candidate to take over the business and a new and famous partnership of Norie and Wilson flourished there. Wilson’s son Charles eventually took over the premises in the mid-Nineteenth Century with the Norie & Wilson business moving to The Minories and it changed to Imray, Laurie, Norie & Wilson in the early Twentieth Century. It still exists today in St Ives Cambrdgshire as Imray, providing sea charts for “leisure sailors”. Sadly none of the original characters in the name are recognised anymore but that it has endured for this period of time is an astounsing achievement.

Although the original premises are sadly lost to development, a model of the mid-shipman carving that used to adorn the Heather premises still exists in The Charles Dickens Museum, an appropriate place since The Navigation Warehouse was used by Dickens as inspiration for Sol Gill’s shop in the novel Dombey & Son.

The actual manufacturer of this instrument, Charles Lincoln belonged to the previous generation of London instrument makers, trading from 1765 to 1804 in various premises in Leadenhall Street. His Father Thomas Lincoln (under whom Charles trained), was himself a renowned maker who served as the Master of The Spectacle Maker’s Company from 1746 – 1747 and his death coincides with Charles’s early trading period, suggesting that he took over an already respected business. He succeeded to his Father position in The Spectacle Maker’s Company for the three years from 1787 – 1790 and was known to have had numerous apprentices notably Charles Silberrad and William Cox, the latter being turned over to him from John Cuff.

Excepting his large achievements during his lifetime, Lincoln’s trading life is as yet only lightly documented. His instruments and those of his apprentices however, continue to speak very well for his abilities as an instrument maker.

The placement of the Lincoln engraving to the reverse of the dust slide does lead me to consider whether William Heather ever knew of its placement but thankfully, it provides a fascinating insight into the London trading relationships that existed at the turn of the Eighteenth Century.