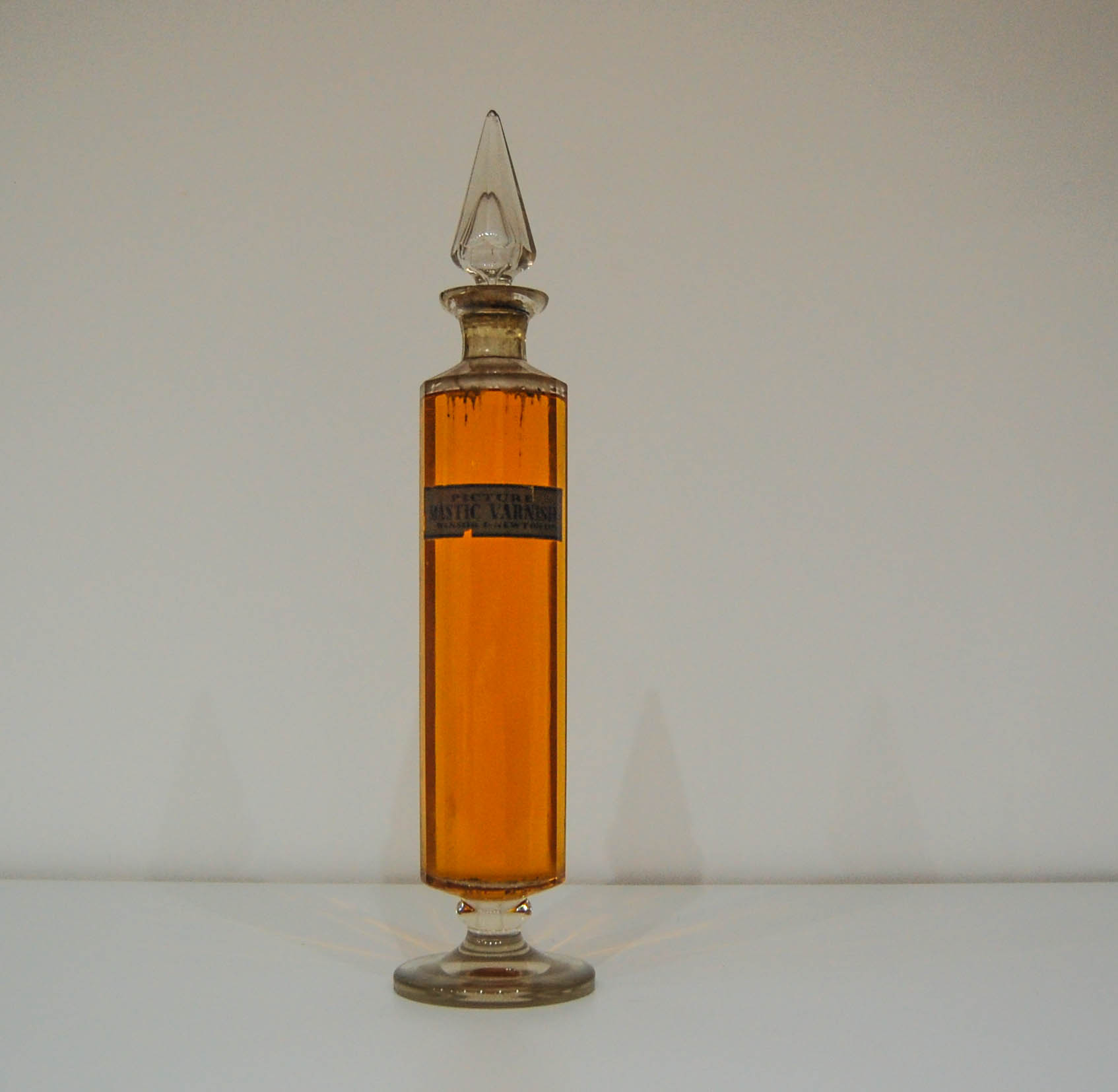 This rare surviving bottle of mastic varnish is contained in its original apothecary type glass bottle with stem stand, chamfered edge body and culminates in a beautiful tear drop shaped stopper which remains with its original wax seal.

It was previously owned by a Sales Director of Winsor & Newton who was employed by the company from the 1970’s through to the 1990’s.

The company of Winsor & Newton was founded in 1832 by childhood friends William Winsor & Henry Newton (a scientist and an artist) at 38 Rathbone Place in London an artists’ quarter where numerous famous artists and colourmen had premises. It is thought that Constable had studios thrtr at the same period.

Their first breakthrough was the company’s development in 1835 of glycerine based watercolours, a significant development for outdoor painting and six years later they were awarded their first Royal Warrant to Queen Victoria, an honour which the company still maintains to this day. Further developments appeared a year later in 1842 with the invention of the first screw cap metal tubes for paints and nine years later, were also the only artist suppliers that won a prize medal at The Great Exhibition. In 1854, the company purchased the research notebooks of the Colourman George Field whose work provided the basis for the introduction of numerous new pigments, most notably Rose Madder.

In 1881, just prior to Henry Newton’s death, the company was sold to the newly incorporated business of Winsor & Newton Limited which maintained family members as shareholders until the 1970’s. Throughout that time and to this day, the company continues to be an innovator of materials for artists and favoured by amateurs and professionals alike.

The company is now owned under the banner of Wilhelm Becker, which also owns the similarly famous brand of Reeves & Sons.

Mastic varnish is derived from the sap of the Pistacia Lentiscus tree which is found almost exclusively on the Island of Chios in Greece. Its origins and use date back to pre-biblical times and was prized for its semi-gloss finish that increases the luminosity of the paint that it protects.

This important relic from this most prestigious company is likely to have been a part of an advertising or shop window display given the decorative nature of the bottle. I have checked available sources for the company’s catalogues of the period and amounts of this volume were not available for resale and smaller amounts (1 pint) were retailing at 10s, (circa £65 in 1900) an extravagant outlay at that time.

This is not only a beautiful piece for display but would provide an almost unique opportunity to an art historian to sample an unopened bottle of this artist’s medium from over 120 years ago.