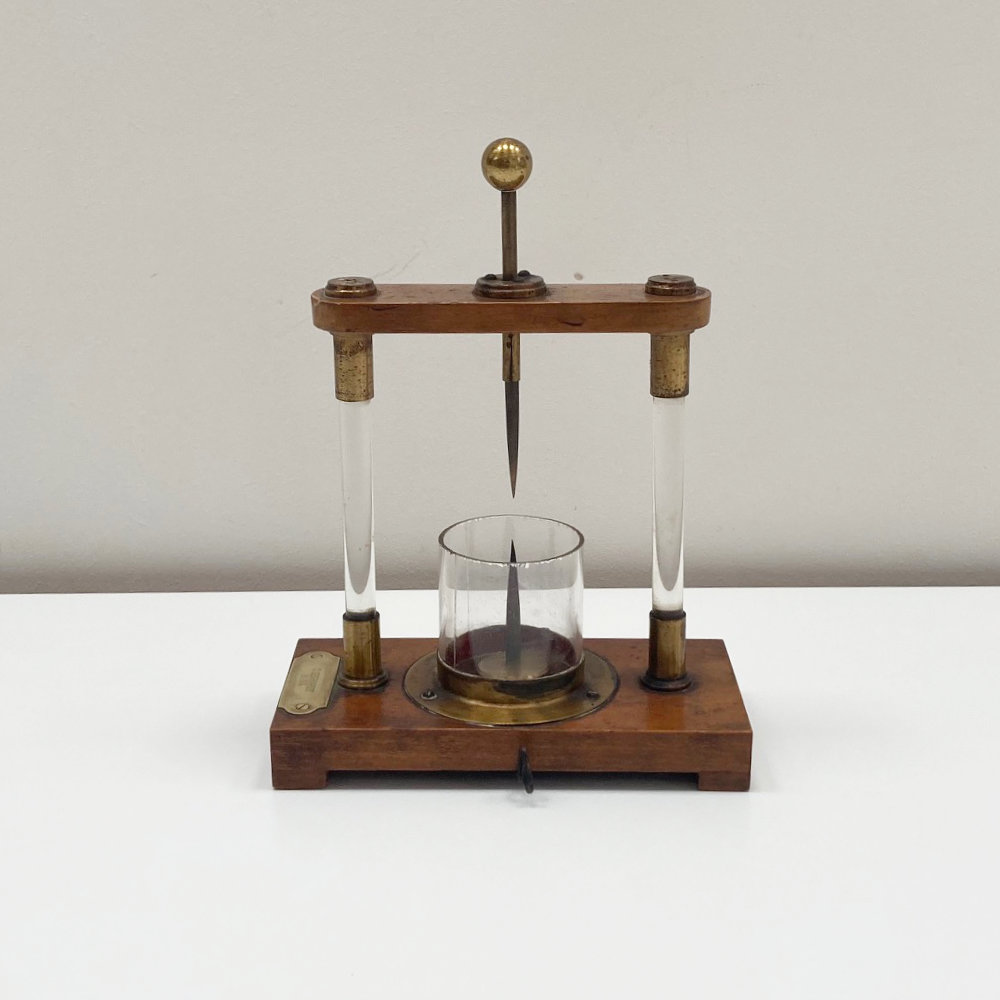 For sale, a late Victorian Henley’s Universal Discharger by C Gerhardt of Bonn.

The instrument consists of a walnut base with vertical glass rods supported by brass ferrules to each side. The rods support a walnut platform into which an up and down adjustable discharge rod is placed through the centre.

To the centre of the base below is a second, fixed discharge rod pointing upwards to meet the other and with a piece of glass tube fixed within a brass base surround. A hook to the front centre of the base is provided to allow electric charge to be sent to the lower rod from a Leyden Jar.

The base is complete with its original brass plaque engraved to the maker, C. Gerhardt, Bonn.

The purpose of the glass tube is clearly demonstrated in Max Kohl’s catalogues (see images) where it is described as, “Apparatus for piercing glass up to a thickness of 2mm”. A small disc of glass is intended to rest upon the tube which acts as a table support after which electrostatic charge can be applied and the glass disc is perforated as a result.

Although the design is somewhat different from most Universal Dischargers which sport a central table and a discharge rod to each side, the principles and intent is the same, namely, to show the effects of deflagration on various materials. In this case, it seems to have been designed specifically for demonstrating the perforation of glass by means of electrostatic charge.

The German maker, Charles Gerhardt was born in Bonn in 1846, the same year in which the chemistry outfitter, “Marquarts’s Lager Chemischer Utensilien” was formed. Gerhardt eventually joined the firm as an apprentice and later acquired the business in 1872. It was originally based at 100 Bornheimer Street in Bonn.

In 1884 he became the first to produce apparatus to support the German Chemist, Johan Kjeldahl’s newly discovered method for identifying the amount of nitrogen contained within various organic materials (The Kjeldahl method). His relationship was seemingly close with Kjeldahl, as he also produced digestion and distillation equipment for the scientist during the same decade.

Gerhardt died at a reasonably young age in 1907 where after the company was renamed to C. Gerhardt, Fabrik und Lager Chemischer Apparate by his son. Under Walter Gerhardt’s stewardship, the company gained worldwide recognition. Charles’s daughter also lived at the Bornheimer Street site where she married the German Expressionist painter August Macke. Many of his paintings feature the premises in which this instrument was made.

For reasons unknown, the company was eventually passed through the female line of the Gerhardt family, and it continues to be owned and managed by the Macke family to this day. Quite understandably, it maintains strong links between the science, arts and the environment.