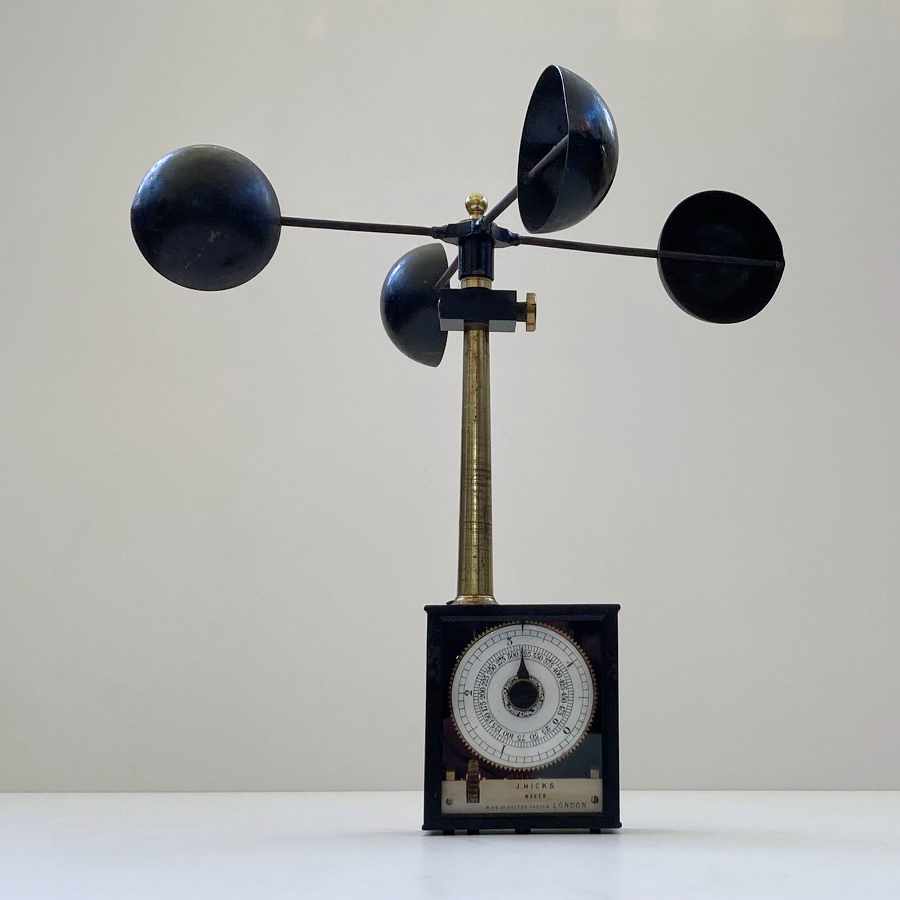 Comprised of four copper hemispherical cups attached by arms to a brass vertical rod and secured at the top by means of a brass screw. The axis is attached to a case with glazed front containing the geared mechanism for recording the revolutions of the cups when exposed to the wind.

A ceramic scale plate with fixed and hand operated indicators is provided at the front and below is a silvered plaque with the maker details engraved, “J Hicks Maker. 8,9 & 10 Hatton Gardens, London”

Commonly described singularly as a Robinson’s cup anemometer, this simpler form was in fact produced in conjunction with Robert Beckley who was the Mechanical Assistant at Kew Observatory from 1853 – 1872 and was Grandfather to Robert Whipple, founder of The Whipple Museum in Cambridge. It is in effect a simpler and more portable version of Dr Thomas Romney Robinson’s famous invention which he produced in 1850 and which had numerous concentric scales for longer term measurement periods. It is described in Casella’s catalogues as follows:

“Beckley’s Improved Anemometer – It will be seen by the illustrations that this is a simplification of Robinson’s. The hemispherical cups are retained, but the index portion of the instrument consists of two graduated concentric circles, the inner one representing five miles divided into 10ths and the outer one bearing 100 divisions, each of which is equivalent to five miles. At the top of the dial is a fixed index, which, as the toothed wheel revolved, marks on the inner circle the miles (up to five) and 10ths of miles the wind has travelled, while a moveable index, which revolves with the wheel, indicates on the outer circle the passage of every five miles.

This instrument can be made very portable by removing the arms bearing the cups, when the whole may be packed with iron shaft in a case 15x13x4 inches. It may be placed in any desired position by screwing the iron shaft supplied with it into the hole provided for the purpose and fixing the apparatus on a pole or other elevated stand, if possible, in an open space exposed to the direct action of the wind.

If, when placing the instrument, the hands stand at 0, the next reading will of course show the number of miles the wind has traversed; but should they stand otherwise, the reading may be noted and deducted from the second reading, thus:

Suppose the fixed index points to 2.5 and the moveable index to 125, the reading after 12 hours may be 200 on the outer circle and 3.0 on the inner circle; these added together yield 203. By deducting the previous reading, 127.5, we have the true reading – viz. 75.5 miles as the distance traversed by the wind.”

The maker, James Joseph Hicks was born in Cork, Ireland in 1837 to a poor farming family and was sent to London for schooling. He was apprenticed to the famous Louis P Casella where he remained until 1861. In that short time he had already risen to become Casella’s foreman, showing just how able the young Hicks was. He began to trade in his own right in around 1861-1862 at 8 Hatton Gardens, London and was respected enough by 1864 to have been granted membership to The British Meteorological Society.

Hicks was a maker of extraordinary talent and this instrument bears testament to his skills. A rare example in superb order both mechanically and aesthetically.