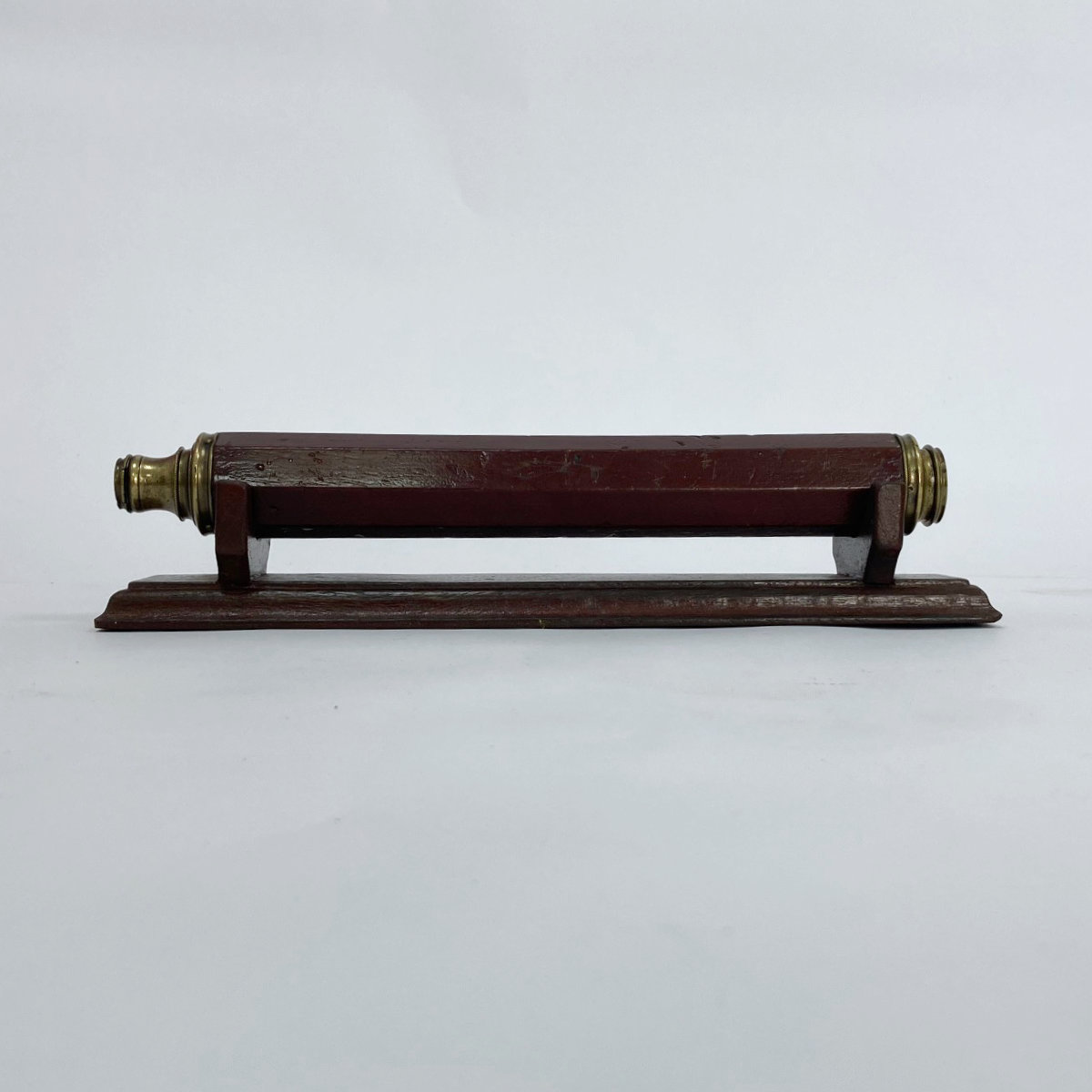 Comprised of eight individual tapered pieces of Cuban mahogany forming the eight and a half inch main barrel with brass graduated cap supporting a single draw with eighteenth century bulbous type eyepiece and original dust slide. This fascinating early eyepiece consists of a three lens combination which unlike later examples formed by brass ring capsules screwed into the barrel, are instead formed by placing a loose lens into a ferrule and with a brass ring secured over the top in order to secure its position. This simple detail is testament to early telescope design. The telescope measures eighteen inches fully drawn.

The half-inch main objective is contained within a two part capsule. The outer section includes the main dust slide engraved with the maker’s name, Nairne, London. A smaller section contains a single loose glass lens which like the eyetube is secured by the pressure of the outer section being screwed into the lower. The single objective proving also that it is of an early non-achromatic nature. The achromatic lens was newly promoted and long argued by the Dollonds from around this period.

The maker, Edward Nairne needs little introduction, born in Sandwich in 1726 he was apprenticed at the age of fifteen to the equally famous instrument maker Matthew Loft. Having barely finished his seven year apprenticeship, Loft died in 1748 whereupon Nairne took over his Master’s business under his own name.

In 1749, he took on the first of his apprentices and eventually trained fourteen accolytes who included numerous important figures such as Jesse Ramsden, James Ayscough, James Long and of course Thomas Blunt who joined the company in 1760. Nairne was one of the most capable instrument makers of his period and he is known to have maintained correspondence with Benjamin Franklin, supplying him with a set of magnets and an achromatic telescope. He also provided a dip circle for Captain Phipp’s voyage to the Pole in 1774. His inventions also including the famous, “Nairne Patent Electrical Machine”, the first marine barometer which incorporated a thinner bore to the barometer tube between the cistern and the scale (used on James Cook’s second voyage to the South Pacific) and is even regarded as the first to have sold the pencil eraser.

During his lifetime in his own right and during the period of partnership with Blunt, Nairne held a Royal Appointment to George III, was an active contributor and Fellow of The Royal Society, became Master of the Spectacle Makers Guild and held an Appointment to the Royal Greenwich Observatory.

Given Nairne’s workload and engagements, it is unsurprising that he sought a partnership with his apprentice Thomas Blunt. It must be assumed that Blunt continued to work for Nairne for the seven years following his initial training as he is listed at Nairne’s trading address of 22 Cornhill throughout this period. There is little doubt that Blunt was the lesser partner of the relationship given the huge stature that Nairne had commanded by this point but nonetheless his skill and abilities allowed the partnership to serve all of the Appointments that were bestowed on the company and he is known to have worked with Jean Hyacinthe De Magellan on the development of his “new” barometer. In 1792, Blunt achieved the same accolade as his partner and assumed the role of Master of the Spectacle Makers Guild proving beyond doubt his position within the industry and it was a role that he continued throughout the dissolution of the partnership in 1793 and into 1794.

Little is known why such a successful partnership such as this ended. Nairne continued to trade until his retirement in 1801 at the same address of 20 Cornhill whilst Blunt set up shop next door at 22 Cornhill. It is reasonable to consider that Blunt thought his role in the guild demanded a business with his name alone but without specific evidence this is simply reasonable conjecture. It may also have been a move by Blunt to create a family business with his sons that were slowly coming of age. His eldest Charles would have been in a position to apprentice to his Father at this point in time.

Nairne died shortly after in 1806 and Blunt continued to trade, taking on his sons, Charles as referenced above and later Thomas Jr and Edward. Charles is known to have been working with his Father by 1801 under the business name of Thomas Blunt & Son through records of purchase at Christ’s Hospital, although he seems to have entered into business on his own account in the early part of the second decade at Tavistock Street in Covent Garden.

Thereafter the business became T&T Blunt with the inclusion of his middle son Thomas Jr which seemed only to last for another ten years into the early 1820’s whereupon the business continued as Blunt & Son with his youngest Edward. Thomas Blunt Sr died in 1823 leaving the business to his younger son but sadly Edward also died at the age of 28 after which the business was sold to Thomas Harris & Son.

A stunning example from the workshop of Edward Nairne which may well have been created by any one of the stellar cast of apprentices that had the good fortune to be tutored by this Father of scientific instrument making during the Enlightenment period.