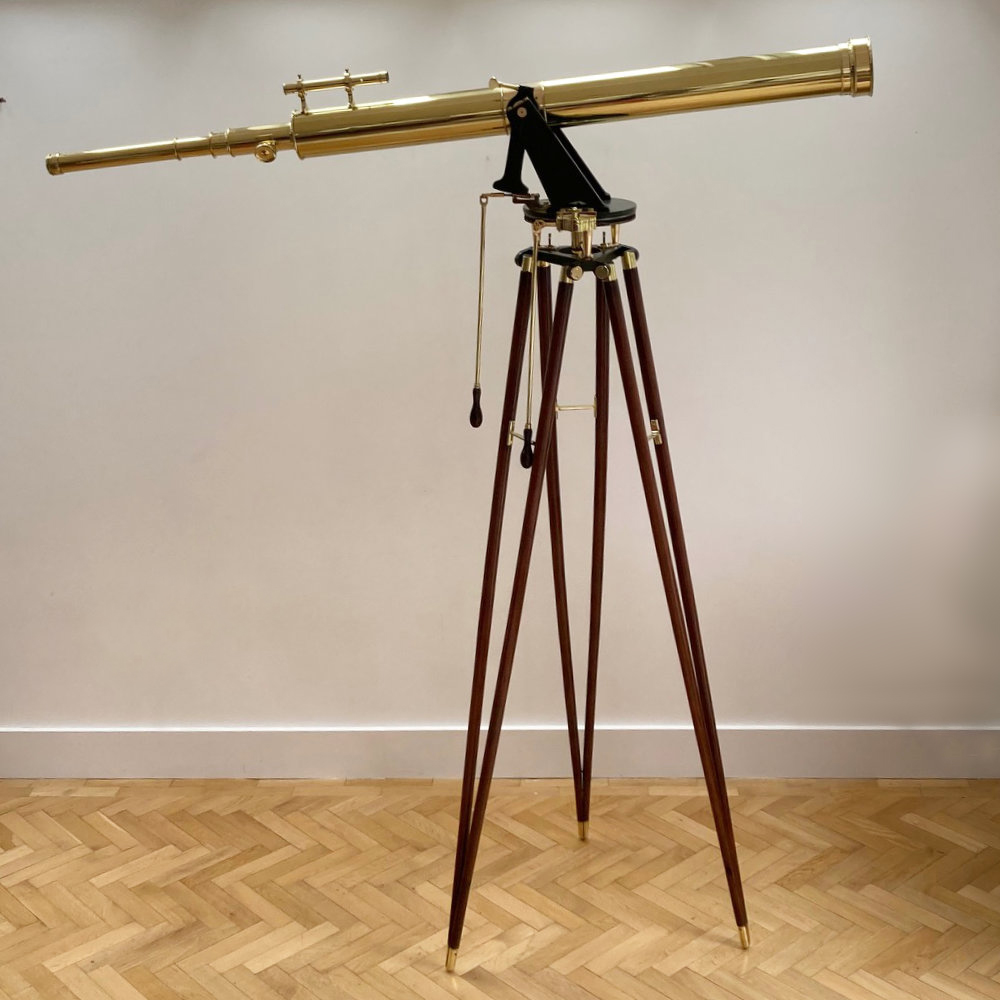 For sale, an extraordinarily beautiful astronomical telescope on stand, by John Browning of 63 The Strand, London.

Perhaps the finest example I have had the pleasure of owning, this would have been manufactured for serious astronomical observation. It is comprised of 55 inch brass barrel with a 4 inch objective lens and is operated by means of a manual focus sliding eye tube and fine focus being achieved by a small secondary barrel operated on rack and pinion and a knurled brass turn at the side. This end of the main barrel Is also engraved to the maker, John Browning and the address of 63 The Strand, London giving good indication of manufacture date. The main lens is further engraved to John Browning and is visible when removed (Please see images) and retains its original dust cap.

The top of the main barrel is also provided with a smaller star finder scope which would allow the observer to locate general positioning of astronomical objects before moving to its more high-powered counterpart.

The altazimuth mount provides further indication of the telescope’s quality. Two central lugs provided at the centre of the barrel are positioned and locked into a heavy cast iron mount which is provided with worm gears which enable fine adjustment for both altitude and azimuth movements when tracking celestial objects. Both are hand-adjusted by a length of brass rod with wooden handles so that the operator can position while also maintaining their place at the telescope. For quicker azimuth movement, the worm gear is also capable of being disengaged.

The underside of the mount has three solid brass feet which rest upon a triangular cast iron plate at the top of the tripod. The feet are locked into position by three brass slides which are placed around each one and fastened with a solid brass hand screw.

The triangular tripod head is also fitted with two lugs on each face, onto which is placed a beech, two part leg with brass end caps and brass feet. When attached, the legs are initially loose fitting until a hinged bar is engaged between the two parts of each leg and the outward force subsequently locks them to the tripod head and creates the rigidity required to stabilise this large instrument.

This fine instrument retains its original fitted mahogany case which also includes a sunshade attachment for the objective end and three additional eyepiece lenses with differing levels of magnification. All of these are engraved to john Browning. A seriously good and very complete example.

John Browning (1831 – 1925) came from a line of famous instrument makers dating back to the mid-Eighteenth Century. His ancestors William & Samuel Browning along with William Spencer and Ebeneezer Rust were all apprenticed to Richard Rust. The result was the formation of the famous Georgian company of Spencer, Browning & Rust, a partnership which remained in place until 1840 albeit with varying family members over time. John Browning’s Father William was a nautical instrument maker and although his son John was intended for a medical career, he was drawn back to instrument making during the late 1840’s at which time he also attended The Royal College of Chemistry. In 1856, Browning assumed control of his Father’s business (now named Spencer Browning & Co) at the Minories in London and just six years later was amongst the exhibitors of the 1862 London Exhibition where he was merited for aneroid barometer designs. His relation Samuel J Browning who had taken over the famous Portsmouth business of George Stebbing had also been merited at the earlier 1851 Great Exhibition before him.

After his 1862 success, Browning patented numerous instruments and is known to have supplied spectroscopes to the photographer William Henry Fox Talbot, and later presented his work to The Royal Society. His strong personal interest in astronomy and work in the field of optics saw the company produce both high end and affordable telescopes to enable accessibly priced instruments to the less wealthy. In 1865, he was elected to the Royal Astronomical Society amongst others too numerous to list. He was a keen contributor to the Societies publications and later served on the council from 1870 to 1873. By this point his trade cards presented him as maker to Her Majesty’s Government and to the Royal Observatory, Kew Observatory for whom he eventually developed his spectroscope for use in combination with telescopes for observing stars.

In 1872 the company also conducted a move of premises to 63 The Strand at which point it is likely that the name was changed solely to John Browning. He was commissioned a year later to install the first electric light in London, provided at The Guildhall on the occasion on a visit by the Shah of Persia.

Amongst other publications on astronomy and general optics, his “How to Work with the Spectroscope” was brought out in 1878 and went through numerous editions, a cursory glance of the initial publication and its accompanying price list provides a huge array of instruments and related accessories.

Browning was evidently a perfectionist and a workaholic, the sheer breadth of his involvement in varying scientific subjects is breathtaking, he supplied instruments to numerous Governmental, educational and scientific establishments including numerous important scientists throughout his years of trading.

The Company was eventually sold out to W Watson and Son in 1900 leaving Browning to enjoy a surprisingly lengthy, twenty-five-year retirement. He died in Cheltenham in 1925.