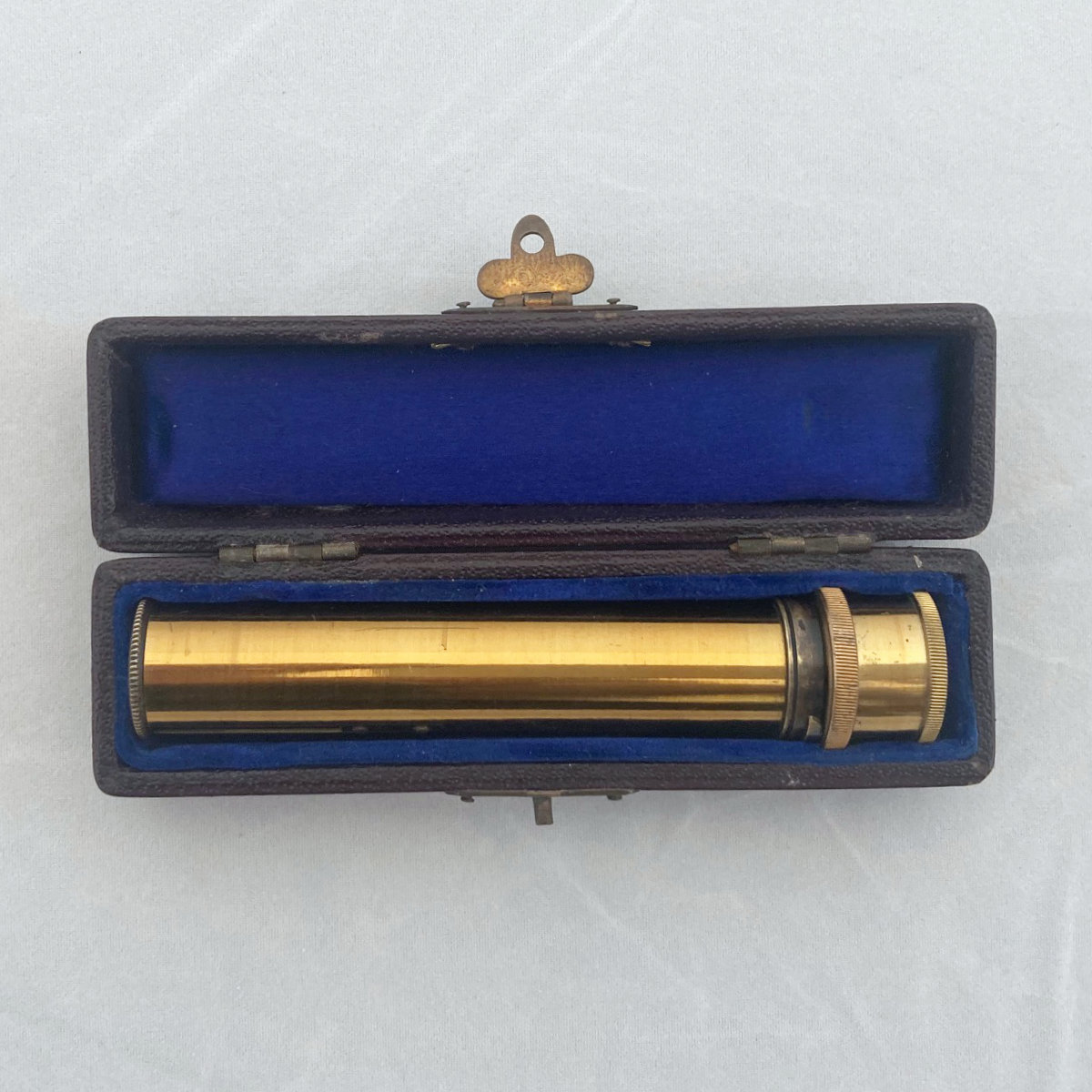 For sale, a rare mid Victorian cased miniature spectroscope by John Browning of 63 The Strand, London.

Clearly described and engraved in Browning’s 1878 publication, “How to Work with The Spectroscope”. This very original and complete, cased spectroscope was sold by Browning as, “The Miniature Spectroscope” and is describes as follows:

“This instrument will show many of Fraunhofer’s lines, the bright lines of the metals and gases, and the absorption bands in coloured gases, crystals, or liquids.

The Miniature Spectroscope consists of a compound direct-vision prism, which is placed in a sliding drawer. At the end of this drawer there is a lens; in the best instruments this is an achromatic combination. At the opposite end to the eye-piece there is a slit, which, in the instruments of a superior class, is adjustable by a screw motion. The two jaws move equably from the centre, on rotating the milled ring between the thumb and finger. The jaws of this slit will require to be almost closed to view the Fraunhofer lines but may with advantage be opened wider when viewing the lines of chemical spectra, or absorption bands in coloured liquids.”

The instrument retains the majority of its exterior lacquer and has been kept pristine in its fitted case for most of its existence. The barrel is engraved to John Browning, 63 Strand, London and it retains its original dust cap and as described in the quote above, this example has the adjustable jaws which were applied to the superior class examples.

John Browning (1831 – 1925) came from a line of famous instrument makers dating back to the mid-Eighteenth Century. His ancestors William & Samuel Browning along with William Spencer and Ebeneezer Rust were all apprenticed to Richard Rust. The result was the formation of the famous Georgian company of Spencer, Browning & Rust, a partnership which remained in place until 1840 albeit with varying family members over time. John Browning’s Father William was a nautical instrument maker and although his son John was intended for a medical career, he was drawn back to instrument making during the late 1840’s at which time he also attended The Royal College of Chemistry. In 1856, Browning assumed control of his Father’s business (now named Spencer Browning & Co) at the Minories in London and just six years later was amongst the exhibitors of the 1862 London Exhibition where he was merited for aneroid barometer designs. His relation Samuel J Browning who had taken over the famous Portsmouth business of George Stebbing had also been merited at the earlier 1851 Great Exhibition before him.

After his 1862 success, Browning patented numerous instruments and is known to have supplied spectroscopes to the photographer William Henry Fox Talbot, his specialism in this field gave him opportunity to present his work at The Royal Society in 1872. In the same year the company also conducted a move of premises to 63 The Strand at which point it is likely that the name was changed solely to John Browning. He was commissioned a year later to install the first electric light in London, provided at The Guildhall on the occasion on a visit by the Shah of Persia.

Amongst other publications on astronomy and general optics, his “How to Work with the Spectroscope” was brought out in 1878 and went through numerous editions, a cursory glance of the initial publication and its accompanying price list provides a huge array of instruments and accessories related to the subject.

Browning was evidently a perfectionist and a workaholic, the sheer breadth of his involvement in varying scientific subjects is breathtaking, besides his work in Spectroscopy, he supplied instruments to The Government, to The Royal Observatory and numerous important scientists while also having time to be a founding member of the British Optical Association, a member of the Aeronautical Society of Great Britain, The Meteorological Society and The Royal Institution.

The Company was eventually sold out to W Watson and Son in 1900 leaving Browning to enjoy a surprisingly lengthy, twenty-five year retirement. He died in Cheltenham in 1925.