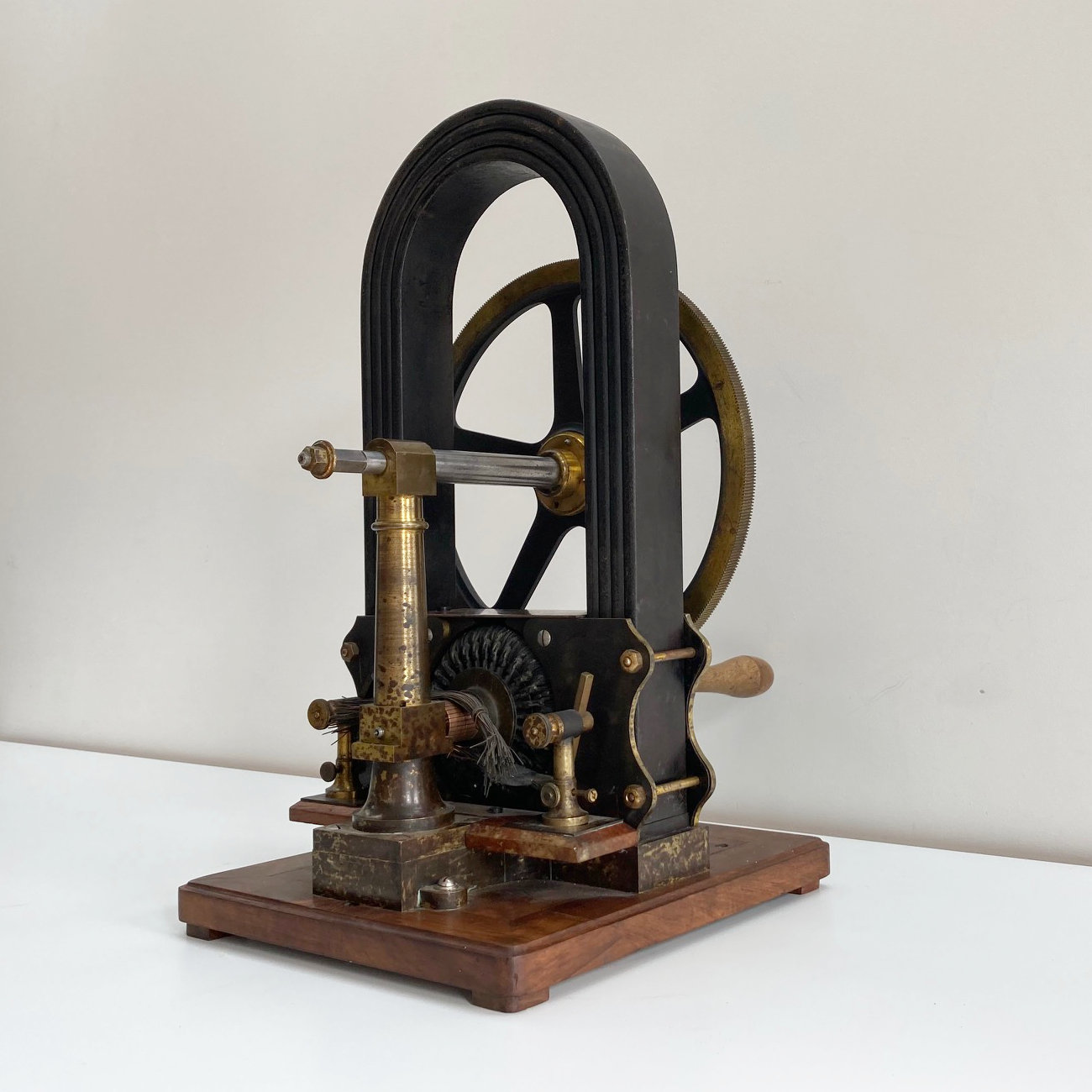 For sale, a museum quality Mark III Gramme Dynamo and DC motor by Breguet of Paris.

The machine is comprised of four inverted horse-shoe magnets held upright by a brass central casing. In the central cavity of the casing between the magnet ends is a gramme ring attached to a spindle which emanates from the side of the casing. A toothed gear wheel held on the spindle is contacted by a much larger 13.5” brass gear wheel on its own spindle supported by beautifully turned brass columns either side. The machine can be hand operated via a brass arm with a turned wooden handle which may be applied to either side for ease of use.

The brass top plate applied to the casing is further engraved with the name, Mon’ Breguet and the serial number 1122.

Able to produce direct current, Zenobe Gramme’s machine was the first to produce power on an industrial scale (rather than simply for philosophical demonstrations) and is considered a critical milestone in the development of the modern motor. Although designed as a hand cranked dynamo, Gramme and his assistant stumbled by chance onto the fact that it would also act as DC electric motor if supplied with a constant voltage.

This example was his mark III design and is probably his most well-known. The success lay in the wire wrapped ring (Gramme ring) which substantially improved on other existing motors and whose principle would become the blueprint for every motor today.

The Belgian inventor Zenobe Gramme (1826 – 1901) was an unlikely candidate for such a ground-breaking development, he was largely uneducated although his practical joinery skills attained him work in Brussels, Marseilles and eventually Paris where he took a job as a model maker for Alliance, an electrical construction company.

Whilst working at Alliance, his interest in electrical science grew and he developed and patented several improvements for the production of arc lamps. His abilities were obviously recognised and he later took up a position with the famous, Heinrich Ruhmkorff with whom the Breguet family also had a working relationship.

By 1867, Gramme had lodged a further patent for improvements to alternating current machine (induction coils) and building on the work of the Italian physicist, Antonio Pacinotti, in 1868 the first Gramme machine was produced. After further refinement and the obvious delays caused by the Franco-Prussian War, Gramme’s machine was finally presented in 1871 to the physicist Jules Jamin at The Academy of Sciences in Paris. In the same year it was also patented and Gramme entered into partnership with the electrical engineer, Hippolyte Fontaine to form the Gramme Magnetoelectric Machine Company. The machine was a leap forward, the power it generated opened the possibility for the use of electric motors in industry and its fame spread internationally after its presentation at the Universal Exhibition of Vienna in 1876.

In 1875, Gramme also agreed a manufacturing deal with Antoine Breguet for the production of the Gramme Machine. It is unclear why he didn’t maintain this in-house but I suspect the financial burden of manufacture and an offer from this most famous of French firms was an appealing prospect. In the same year, the young Nikolai Tesla was also present at a lecture and demonstration of the Gramme Machine at the Graz University of Technology and this moment is now considered the catalyst for his ideas and later works.

For his efforts, Gramme was presented with the Legion d’Honneur in 1877 as was his partner Hippolyte Fontaine in 1881. The former was also awarded the Volta prize in 1888.

The Breguet business which produced the Gramme Machine was somewhat different to the historic watchmaking firm that Antoine Breguet’s ancestors became worldly acclaimed for. He was of course, the Great Grandson of Abraham Breguet the founder who created the company in 1775 but his Father, Louis Clement Francois Breguet had largely standardised the old business during his tenure and had spend much of his time working on other scientific instruments and the then newly developing industry around telegraphy.

By 1870, again perhaps to the uncertainties of the Franco-Prussian war, the watchmaking business was transferred out of family ownership to their English workshop manager, Edward Brown in whose family it remained until 1970. Breguet’s son, Antoine was at this time a student and during the war, he was called up to serve as a mining engineer during the siege of Paris. He went on to study at the Ecole Polytechnique and thereafter joined the new scientific instrument making business that his Father had set up.

By 1875, he had brokered a deal with Gramme to make his machines and proceeded to write a small book on the subject explaining in detail the science that resulted in this ground-breaking invention, it was however accused of plagiarism by the English academic JW Barrett:

“On looking through the recent brochure on the Gramme machine by M. Antoine Breguet, I observe that the author has appropriated, without acknowledgment, a large number of the beautifully executed Magnetic Figures which Prof. Silvanus Thompson has long since published, both in your columns (November 28, 1878) and elsewhere. So far as the eye can judge, M. Breguet’s illustrations are printed from clichés of the very blocks used in Prof. Thompson’s papers. If, as I understand was the case, M. Breguet’s attention was called to the omission when he employed a similar illustration in a paper of his, which appeared some little time ago in the Ann. de Chimie et de Physique, the present oversight ought not to pass without some protest—the more emphatic as some of Prof. Thompson’s figures are entirely new and of much theoretical and practical importance.”

In 1880, Antoine incorporated the new Breguet business under the name of “Maison Breguet”, a firm which was to be squarely focused on the manufacture and installation of electrical equipment. He is cited as being the first person to have shown and demonstrated telephony in France just prior to the Universal Exposition in 1878. The Breguet business had also obtained a licence with Alexander Graham Bell to manufacture Bell telephones.

Sadly, Antoine Breguet died in July 1882 from a heart attack, thought to have been brought on by over-exertion, just before the completion of the company’s new workshops at Rue Didot in Paris. Even more devastating was the death of Antoine’s Father, Louis Francois-Clement Breguet in October of 1883 which effectively put an end to the company. Antoine’s son Louis Charles Breguet was only three at the time of his Father’s death, and his Brother Jacques was even younger so neither were in a position to take over. Both went on to forge careers in the aviation industry and Breguet Aviation manufactured aircraft until its eventual buy-out in the 1970’s.

Given the date of the agreement made with Gramme for the production of his machines and the untimely deaths of the Breguet family members, this machine can be accurately dated to between 1875 and 1883.

A very expensive item when new, original Gramme motors are rarely encountered, and this example is certainly deserving of a museum collection.

Note: I have also spent some time translating the text of Antoine Breguet’s publication “The Gramme Machine”. A copy of the full transcript will be included with the sale.