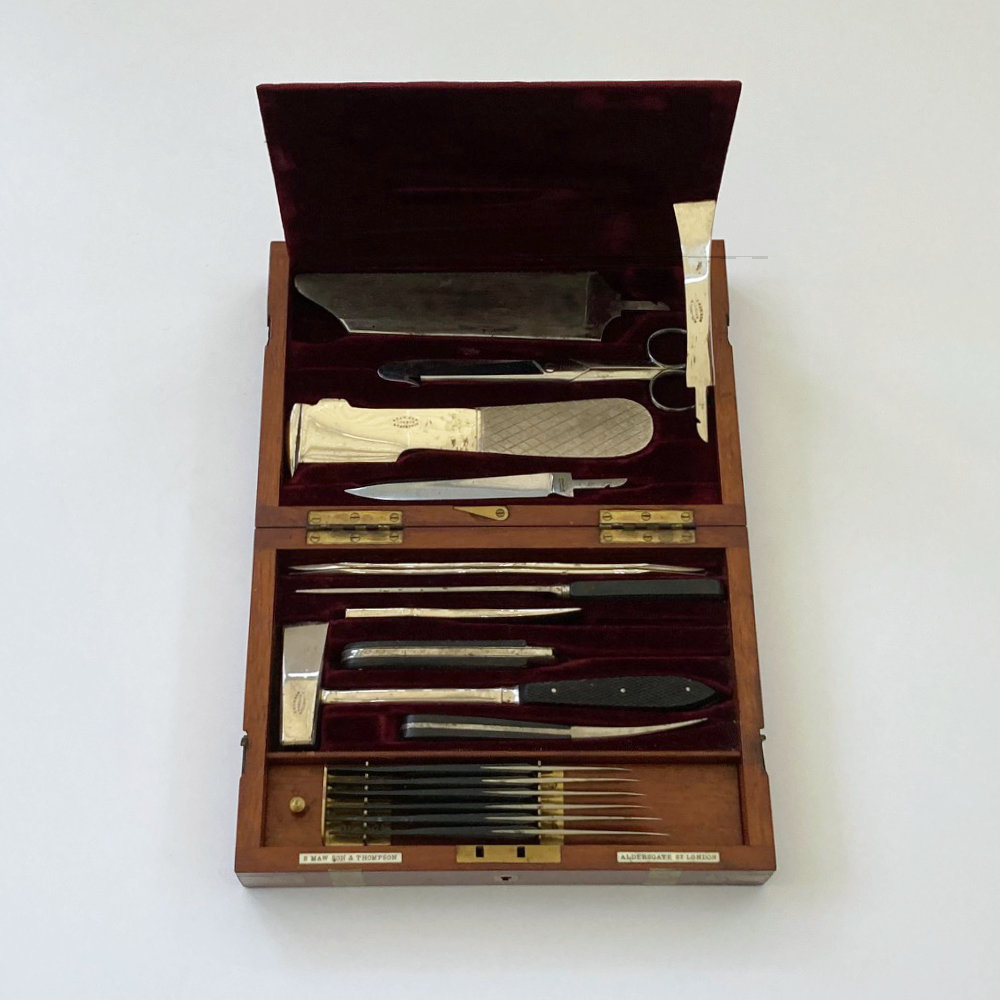 Beautifully preserved in its mahogany and brass bound campaign style case and with crimson velvet three level, fitted interior. The set matches precisely an example which the company advertised in their catalogue of 1870 and includes the following instruments:

Set of chain hooks (Base compartment)

Suture needles and thread (Base compartment)

A truly wonderful and less common set of surgical instruments which remain in superb and complete condition other than a pair of post mortem scissors which would have been positioned behind the saw in the lid section. The case also retains its original key.

The edge of the case has a trade label for S Maw Son & Thompson at Aldergate Street, London and a brass cartouche on the lid also provides the owners name, G. Millhouse of Kirkstall. Millhouse is not hugely prominent in the records, but he was a Member of The Royal College of Surgeons (MRCS) and also a Licentiate of The Royal College of Physicians (LRCP). Available information relates to the 1890’s where he is registered at an address of 4 Church Street in the Leeds directories of 1894 and appears in the Medical News of 1897 which references the birth of a son. As mentioned above, the case itself mirrors the post mortem set which appears in the 1870 catalogue. A similar set appears in the 1891 catalogue, but the interior of the case presents some subtle differences in the layout of the instruments, so I suspect an earlier purchase date.

The Maw dynasty were a huge supplier of medical instruments during the Nineteenth Century and began with George Maw in 1807 in Aldergate Street, London. His sons, John Hornby & Solomon both joined the business at an early age and by 1829 it had been retained solely by Solomon Maw after the retirement of his Father and the removal of his brother to manage a tile business in Worcester.

The firm continued successfully under the stewardship of Solomon Maw and his son Charles entering the business in 1860 led to the new name of S Maw & Son. Sadly, Solomon died the following year and this unfortunate situation saw the company renamed (somewhat confusingly) to S. Maw, Son & Sons after Charles’s sons were then introduced after him. By 1870 with the increasing demand for Maw’s products and perhaps the slight lack of experience of its young owners, the Maws formed a partnership with John Thompson who had worked for the firm since 1851. With his understanding of the business and the Maw’s endeavour, the firm continued to grow both in the UK and across the globe.

In this comfortable state, the company continued until 1901 and the death of John Thompson. Just four years later, the death of Charles followed after a long illness which had precluded him from visiting his London premises. The family evidently treated the workforce well, giving them an additional weeks’ pay to celebrate Charles’s fiftieth year in business and hosting yearly company cricket matches at his house whilst he was convalescing.

Following his and Thompson’s death, the company changed to S. Maw & Sons, and they continued to thrive through the First World War periods, taking over the famous business of Henry Crouch and also changing their name to Maw Pharmacy Supplies in 1940.

It is not entirely clear what fate befell the company after this period, but it seems that it did not last much past the mid part of the Twentieth Century.