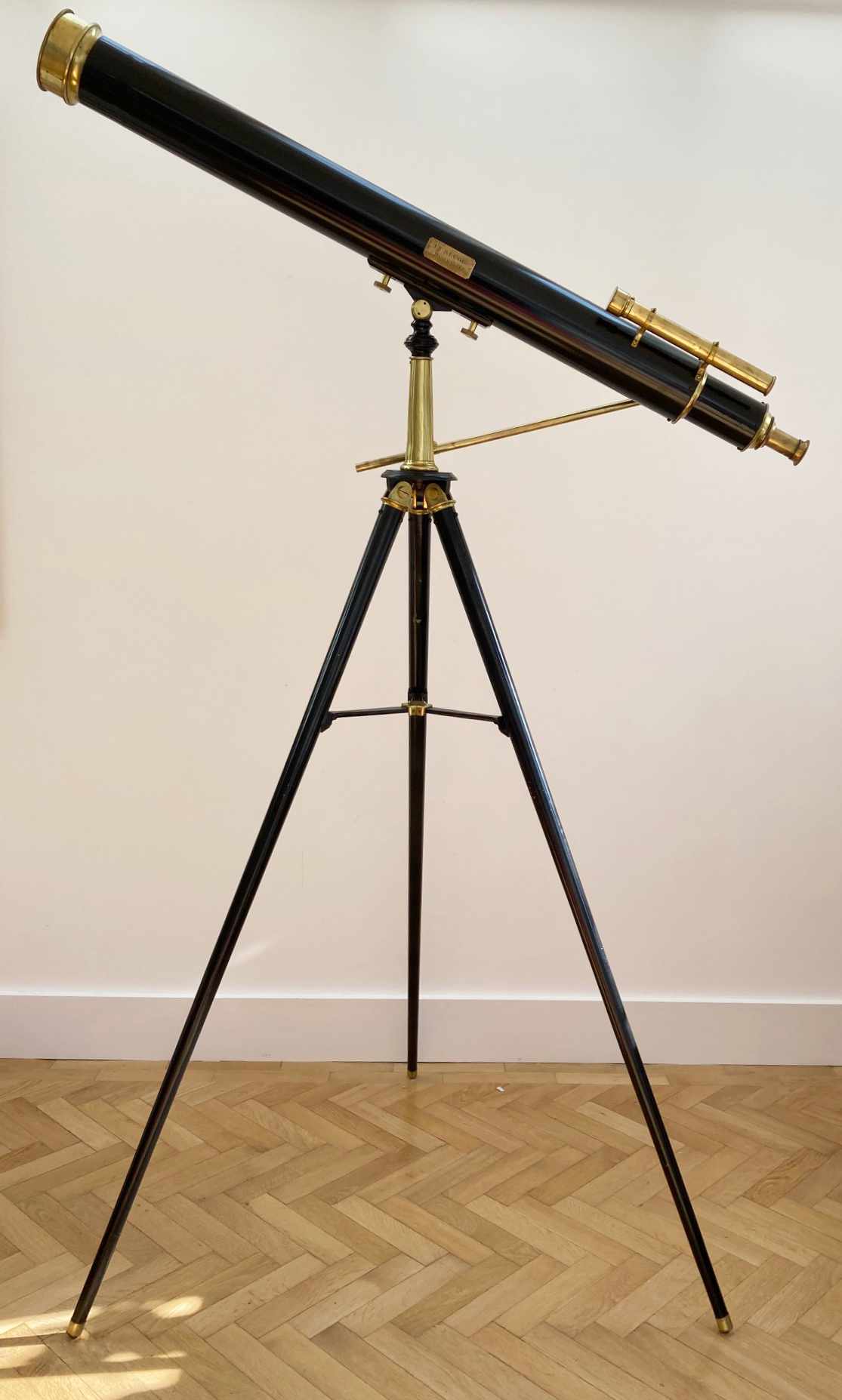 For sale, a large mid Victorian telescope on stand by Josiah Thomas Slugg of Manchester.

A super looking and robust Victorian telescope on stand measuring 127cms in length when retracted, 160cms fully extended and with a four inch diameter objective lens protected by its original turned brass lens cap. Coarse focus is achieved by manually operating the first draw tube and fine focus operated by an internal rack mechanism with finely milled adjusting knob to the side. The telescope is also mounted with a single draw starfinder scope to the side with cross hair view and original brass lens cap to one side and a tripod stabilising mount to the other.

The body of the telescope is painted gloss black with exposed lacquered brass sections and it bears a brass plaque halfway down the body, engraved to the Victorian maker, “JT Slugg – Manchester”.

The tripod is comprised of three sturdy metal tube tripod with hinged metal stays attaching all three together allowing for stability when the legs are splayed. The legs terminate at a metal mounting plate onto which a solid brass stand is screwed and onto which a hinged telescope rest attached. The telescope is fixed to the rest and retained by two large brass nuts. Without the telescope the stand measure 160cms in height and about 172cms in height with the telescope horizontally level. The height allows for both terrestrial and astronomical observations as required.

The maker, Josiah Thomas Slugg was born in 1814 in Longholme, Lancashire, the son of a travelling Wesleyian Minister. As attested within his later writings, Slugg was schooled at Wesleyian Woodhouse Grove School in York and in 1829 at the age of 15 moved to Manchester where he was bound as an apprentice to the wholesale & retail Druggists W. Dentith & Co based on Market Street. Half way through his term, he was turned over to Horatio Miller who took over Dentith’s retail concern but Slugg remained there for eight years until 1837. According to Slugg’s reminisces, Miller was a London druggist and his relationships with Manchester’s high society stood him in good stead both socially and intellectually. The bond with his second Master must have been strong as he invited Slugg to partner with him in a Soda Water making business which was carried on in Slugg’s name whilst Miller pursued various other interests.

Miller left the partnership after three years and by 1840 Slugg was the sole owner of a thriving business not only concerned with the sale of soda water but also listed as a chemist and druggist in directories of the period. Numerous references suggest that Slugg also attended lectures of The Manchester Literary & Philosophical Society while also being actively involved with the Wesleyian Church. It is likely that the former organisation was the catalyst for Slugg’s growing personal interest in astronomy and the latter which encouraged him to try to provide affordable and useful equipment for all in society to enjoy.

It is unclear exactly when Slugg branched out into the manufacture of optical equipment but references in newspapers to his cheap telescopes for viewing the comet of 1858 provides some guidance. The previous year, Slugg’s nephew, Josiah Thomas Chapman (JT Chapman) was sent to be apprenticed and his later fame in the photography industry was largely grounded in the education that his Uncle provided for him in optics and in chemical processes.

This period at the turn of the decade seems to have been a prolific one for Slugg and therefore we must assume that he had already gained some skill in instrument manufacture by this point in time. From 1859 to 1862 Slugg also published a number of books and pamphlets on the subject:

Information about telescopes; containing two addresses to the public on cheap telescopes, and remarks by a clergyman on astronomical observations (1860)

The Telescope: its Construction & Use Explained (circa 1860)

Observational Astronomy and Guide to the use of The Telescope (1862)

Buoyed by the success, Slugg also began advertising microscopes in the 1860’s alongside his astronomical telescopes and parallatic stands and he was soon after elected Friend of The Royal Astronomical Society (FRAS).

Likely based upon hi increasing age, Slugg took on an assistant, Mr Harry Kemp in 1875, who being equally inspired by Slugg’s love of optics, became an optician himself. His ageing employer must have taken some time from the business to indulge in further writing as he managed to produce two further historical publications: Woodhouse School: Memorials & Reminiscences and Reminsicences of Manchester Fifty Years Ago, the latter of which continues to provide Manchester historians with rich insight into the City of the Early Nineteenth Century.

Slugg died in 1888 and Kemp continued to manage Sluggs business until 1896.

This telescope is not only a super statement piece with its black and lacquered brass appearance but it is also a superb working instrument which shows quality of manufacture beyond that for which Slugg is generally remembered. Due to his trade as a chemist, he is somewhat overshadowed amongst other Victorian instrument makers but his acceptance to The Royal Astronomical Society is undoubtedly proof of his abilities.