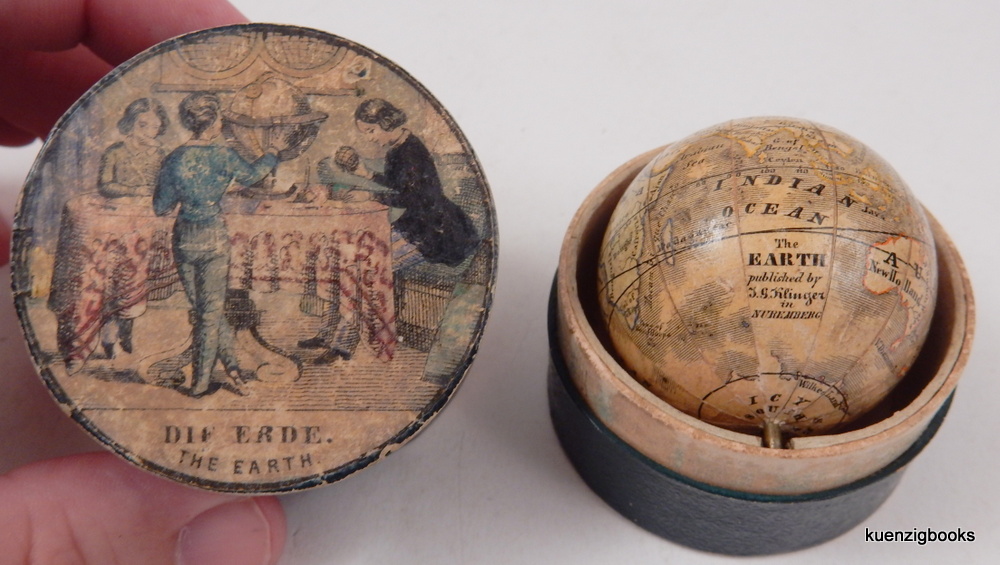 $2750 US plus shipping and insurance

Klinger, J G. [ object, globe ] Miniature Klinger Nuremberg globe in the original case. Nuremberg: J. G. Klinger, [ circa 1860 ]. A very nice example of an all original Klinger Nuremberg globe. The globe is 42.37mm in diameter and 50.13mm including the brass pinions on each end. Twelve hand-colored engraved gores. The original display box is 55.29mm wide, and 53.69mm tall. The box is constructed with three concentric paper tubes. The innermost with two semi-circular cutouts where the globe’s pinions fit allowing it to spin freely. The middle and outer tubes are sized so that the separate fitted top which protects the globe fits snugly. We have had minor conservation work done to semi-circular cutouts, adding small brass semi-circles so the globe rotation no longer wears away at the paper. The display box, quite nice indeed, illustrates children viewing a large globe at a table with a label “The Erde” and “The Earth” below. The globe is labeled in English. A beautiful example, with some patina from careful usage, but much nicer than often found. Near Fine.  [26773]    $2,750

Dekker points out that “Although the globe has [ J. G. Klinger’s ] name on it, it must have been published after his death since it shows Wilkes’ Land, which was discovered in 1840-42” (Globes at Greenwich GLB0017). A rather dirty example of this globe sold at Bonhams in New York in October of 2014 for $3750 including premium.

A perfect addition to any cartographic collection.

Order directly and view other artifacts at:

Based in Topsfield, Massachusetts, Kuenzig Books buys and sells rare and/or interesting items in many fields with a focus on 19th and 20th century Science, Technology, and Engineering. We are particularly interested in the History of Computing, and the speed with which the technological innovations of the 20th century have impacted the way we live. You'll discover some depth in Physics, Mathematics, Nobel Prize authors, Medicine, Scientific Instruments, and Chemistry.

We continue to deal in scientific artifacts (microscopes, philosophical apparatus, early motors, early computers, calculators, slide rules, etc) and you'll find them mixed in with our books at tradeshows. Please inquire if you are interested in artifacts as few are listed on our website.

We also buy and sell ephemera, photography, manuscript material, diaries, letter archives, and business archives in any field. If it tells a strong story, we're interested.