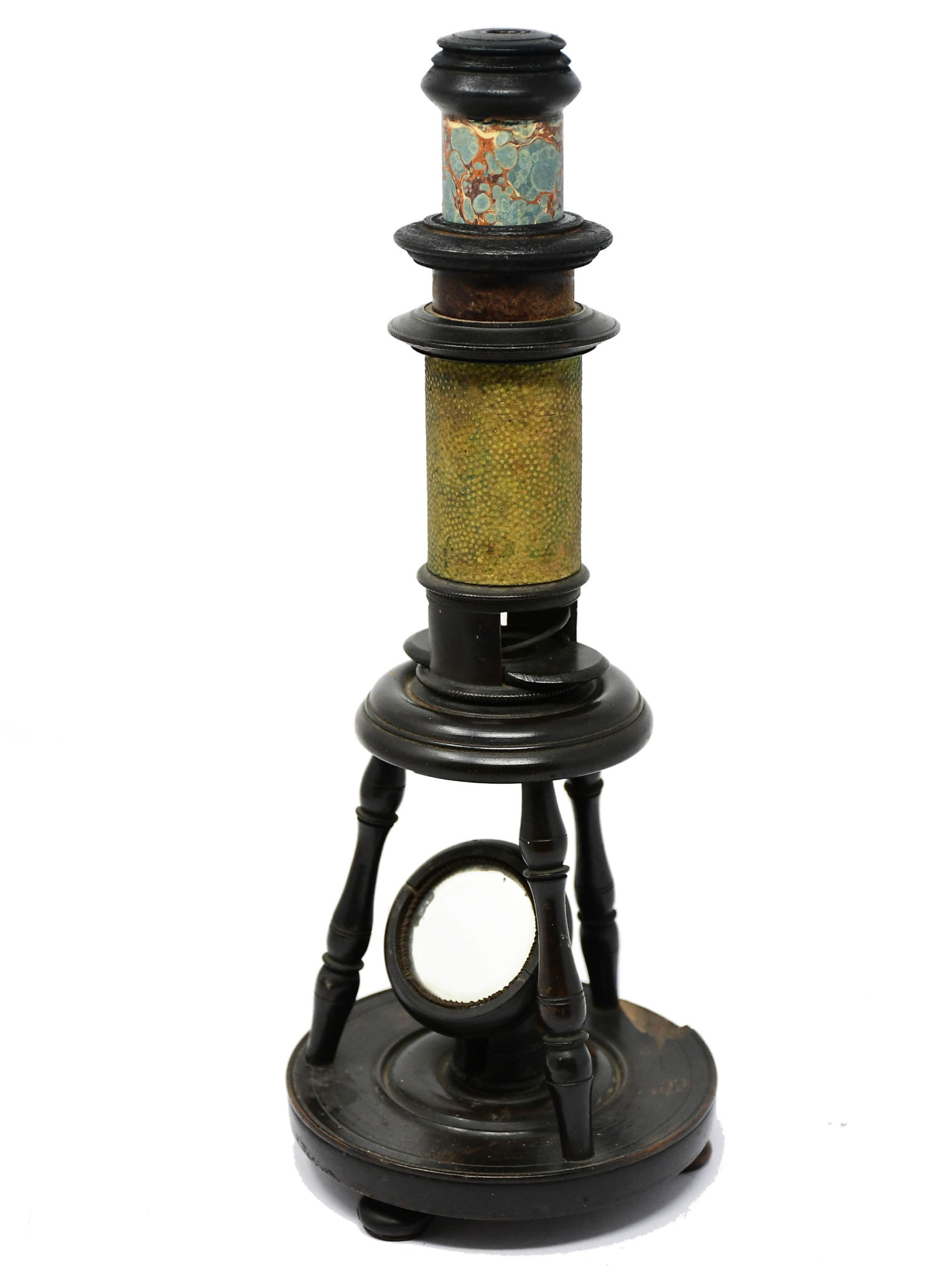 A "Nuremberg microscope" of the type based on the popular design of Edmund Culpepper, ca. 1800.

The term “Nuremberg microscopes” refers to a group of microscopes with very distinct stylistic characteristics, originating in areas of present-day southern Germany: Bavaria and the “Black Forest” area of ​​Baden-Württemberg. Toy manufacturers specializing in woodworking have operated in these areas for centuries. These manufacturers produced portable sundials, and in the 18th century, it was a center for the production of toys and visual glasses in the German countries. It appears that these microscopes were offered as an additional product, sometimes adjacent to simple refractory telescopes. These were simple microscopes and telescopes made of lightweight materials, mainly from light fruitwood and cardboard, that did not pretend to be in line with the professional and very expensive brass instruments of their time, both mechanically and at their optical level.

In 20th-century research, there was a lively discussion about the period of production of Nuremberg’s wooden and cardboard microscopes, many copies of which have been preserved in science museums and private collections. They were originally attributed to the second half of the 18th century. But since the 1980s onwards it has been shown that most of their production was during the late 18th century and into the first half of the 19th century, while telescopes continued to be manufactured into the first decades of the 20th century. The microscopes typical of this make are a special category in the history of the microscope. The devices, which many of the historians of scientific instruments refer to as toy microscopes, could have been made at low cost and in large numbers and were successfully sold in the German lands and beyond. Their optical quality was basic and subject to considerable distortions (aberrations), and due to their defective optical properties were hardly suitable for serious microscopic examinations, even in their time. In their designs, the Nuremberg microscopes were inspired by some of the typical designs of the English microscope of the mid-18th century. Three main types can be identified: a small model based on the pocket microscopes of Benjamin Martin, a model is based on the popular tripod design of Edmund Culpepper from the beginning of the 18th century, and a third model based on the microscope designed by John Cuff in the mid-18th century. The Nuremberg microscopes known so far do not have manufacturer’s signatures, but brand marks, that is, letter combinations engraved on the wood – especially on the lower side of the base. Only a few brands are known so far, although they cannot be attributed to specific manufacturers. The most common combinations of letters are IM and JFF, the first is sometimes attributed to a manufacturer or marketer who identified himself as Junker, Magdeburg. But in all cases, the signatures seem to refer to specific marketers and not specific manufacturers. It is very likely that as was customary in the 18th century, the various wooden parts of the microscopes were mass-produced by specialized workshops, as were the lenses and cardboard tubes, and these were assembled and sold by the marketers under their name.

It is difficult to accurately date the Nuremberg microscopes. Documents from manufacturers or marketers, or other historical sources are unknown and do not appear to have existed. Turner believes that these microscopes were created mainly in the first half of the 19th century. But this theory is contested by the 1790 catalog of Peter Friedrich Catel (1747-1791), where the tripod and the “sentry box” types appear alongside hundreds of other toy instruments in his “Mathematical and Physical Art Cabinet”, which have been most likely existing in the market for at least a few decades.  All of these microscopes were produced in a more or less uniform style, with slight changes in the decorations, probably for several decades. It can be stated in the generalization that most of the production of Nuremberg microscopes took place between the years 1750-1830, mostly around 1800.

The microscope offered here is of the tripod type. Condition is generally good, but the last photo shows that a splinter is missing on the base and there is a crack in the mirror housing. Normally, there is a cup screwing onto a thread to cover the eyepiece, which is missing here. This is probably a later modification that was made to this microscope. The asking price takes into consideration these issues, as compared with the common market price of similar instruments which, in very good condition, are normally sold at $2.5-3k.