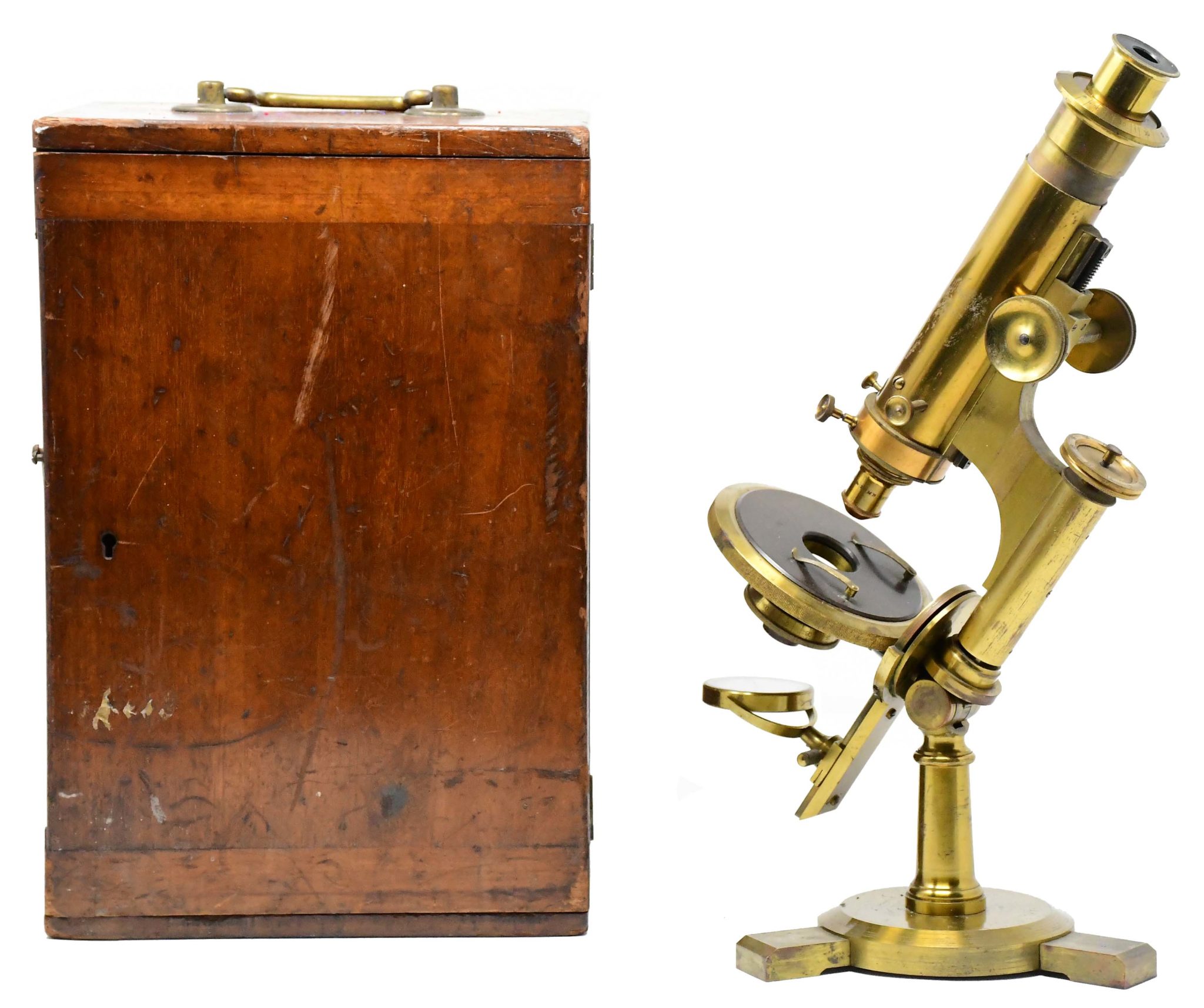 This model of an early petrographic microscope was purchased on eBay. It features many characteristics of the first petrographic microscope manufactured by the London manufacturer R. & J. Beck, and first appeared in the company's sales catalogs in 1882. But the example shown here lacks several components that appeared in the first commercial model, and originally it incorporates a basis different from those that have appeared in microscopes shown in the company's catalogs from the beginning of their publication onwards. Thus, it is most likely a one-off prototype of R. & J. Beck's "Lithological" model of 1881-2.

The microscope is equipped with an eyepiece that features an internal cross. It is integrated into a tube that includes a goniometer, but unlike early European petrographic microscopes, the top polarizer (analyzer) is not of the eyepiece cap type worn on the ocular, but a sliding block containing a Nicol prism located at the lower part of the optical tube. It can be integrated in the field of view or pulled out of it by two milled knobs, each on another side of this sliding block. This is similar to the first commercial model of the microscope, shown here in the illustration from the 1882 catalog of R. & J. Beck, Philadelphia. Under the sliding analyzer is Klein’s accessory quartz plate of a very early model. The stage is circular and can be rotated 360 degrees as in the commercial model, but it lacks degree markings. The substage polarizer, also of the Nicol prism type, is located inside a goniometer that can be moved entirely to and from the field of view of the microscope.

The base of the microscope is undoubtedly original to the device, but it is different in its design from the bases that appear on the commercial model of R. & J. Beck and also in their Ideal Model that served as a platform for the rare petrographic model.

All of these characteristics indicate a very early appearance of the model known from the catalogs, which itself is extremely rare (and I have not found any existing example known to it from any collection). From this, we can conclude that we have here a prototype of the commercial model.

DUE TO NATIONAL AND PERSONAL HOLIDAYS THE MICROSCOPE WILL BE SENT AFTER JULY 10, 2022