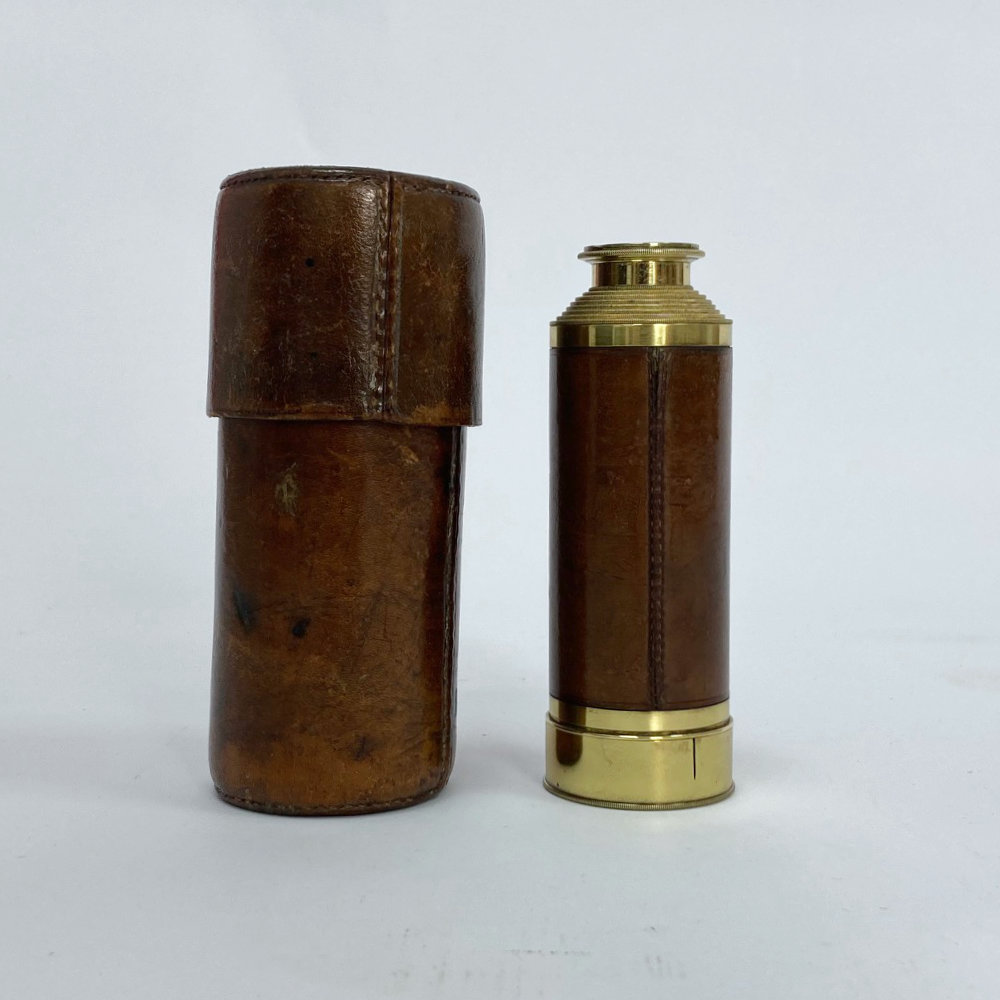 This small but beautifully executed instrument measures, 56cms fully extended, just 12cms when closed and has a one and a quarter inch objective lens. It sports a brown leather covered barrel, original objective cap and dust slide to the eyepiece. It is complete with its original two part leather case with the initials R.O.S engraved to the lid section.

The first draw is engraved to Bate London with further instructions stating, “to adjust by sliding in the second draw”. An important direction, given that most are focused by manipulation of the first draw.

The second draw is further engraved with the word “Canopus”. HMS Canopus was an 84-gun, third rate ship of the line which was captured from the French during the Battle of Aboukir Bay in 1798. The ship was renamed after the ancient settlement of Canopus which lies to the west end of the bay and itself is named after the ancient Greek ship’s pilot who was in the service of King Menelaus of Sparta during the Trojan War.

Under French command, the Franklin as it was initially named, acted second in command to the French fleet during the battle but was forced to surrender to Nelson’s fleet after it suffered a 50% casualty rate to its crew, severe damage to the vessel and had most of its guns disabled.

She was taken into the British fleet in December 1798 and went on to serve as flagship to numerous Admirals of the Napoleonic era. During the years that led up to the Battle of Waterloo in 1815, Canopus served in the Mediterranean Fleet and narrowly missed service at Trafalgar due to a mission to Gibraltar, however she subsequently took part in the Battle of San Domingo, and the attempt to force the Dardanelles.  She finally formed part of Admiral Collingwood’s fleet and saw action at the Battle of Maguelone.

In 1812, after serving as the flagship for Admiral Charles Boyle, Canopus was returned to Plymouth for repairs but was laid up due to the cessation of war. It wasn’t until the 1830’s where she saw sporadic service through to 1869. After numerous years moored, she was finally sold and broken up in 1887.

The maker of this telescope, Robert Brettell Bate was a very high-quality manufacturer of scientific instruments working in the early part of the Nineteenth Century. Born in 1782, to a family of Bankers in Stourbridge, he initially travelled to London to become a Haberdasher under his Uncle Robert Brettell. His Aunt also living in London was married to Bartholomew Sikes, famous for winning favour with The Board of Excise for his hydrometer design in 1802.

In 1804, Robert Bate married his cousin, the daughter of his aunt Mary and Bartholomew Sikes, however it was followed quite shortly with the sudden death of Sikes. Supported by his newly widowed Aunt, Bate took over Sike’s business and its Government commission and successfully persuaded the Board of Excise to adopt the “improved” hydrometer that his Father in Law had been working on before his untimely death.

At this time, the company was being run at 17 Poultry where in 1814 he became a member of the Spectacle Maker’s Company of London, by 1824 his reputation was such that he was further commissioned by the Board of Excise & Ordnance to make the new national standard Imperial measures for weight & capacity created by George IV, this event led Bate to acquire further premises at 20 and 21 Poultry. It was this Governmental relationship that underpinned his entire career, leading to an important commission from the US Mint where his Troy pound standard weight became legal standard for US coinage at the time and his instruments were also known to have been used by The East India Company, The Royal Navy, The Board of Ordnance, The Hydrographic Office and The Bank of England.

His quality of manufacture led him to receive Royal Appointments from George IV, William IV and Queen Victoria where he acted as Optician and he eventually rose to become Master of the Spectacle Maker’s Guild in 1833. He was also known to have acted for the Admiralty as its main chart agent with numerous sub agents acting below him such as his old apprentice and instrument maker to The Royal yacht Club, George Stebbing.

The final two decades of his life (the 1830’s and 40’s) were riddled with ill health probably due to the amount of work that he was undertaking. He travelled widely across the UK and abroad for health reasons but still maintained lively correspondence with his customers.

Bate traded from his Poultry street addresses for the majority of his career although he moved to number 33 Royal Exchange in 1846 until his death shortly after in 1847. Bate’s widow continued to run the business until 1850 where after the Excise work was taken over by Dring & Fage and the Admiralty Chart side of the business went to Bate’s former employee, John Dennett Potter.

A super telescope with some really tantalising provenance. However tempting it might be to consider this telescope a Napoleonic relic, I would suggest that it is more likely to relate to the period of Canopus’s renewed career in the 1830’s. If one considers the ship’s history, Bate’s career history and the similarities that this telescope bears to Kitchiner’s design for his pancratic telescopes of the 1820’s, it would be more appropriate to consider a circa date of 1830. Nevertheless, a fascinating piece of maritime history.