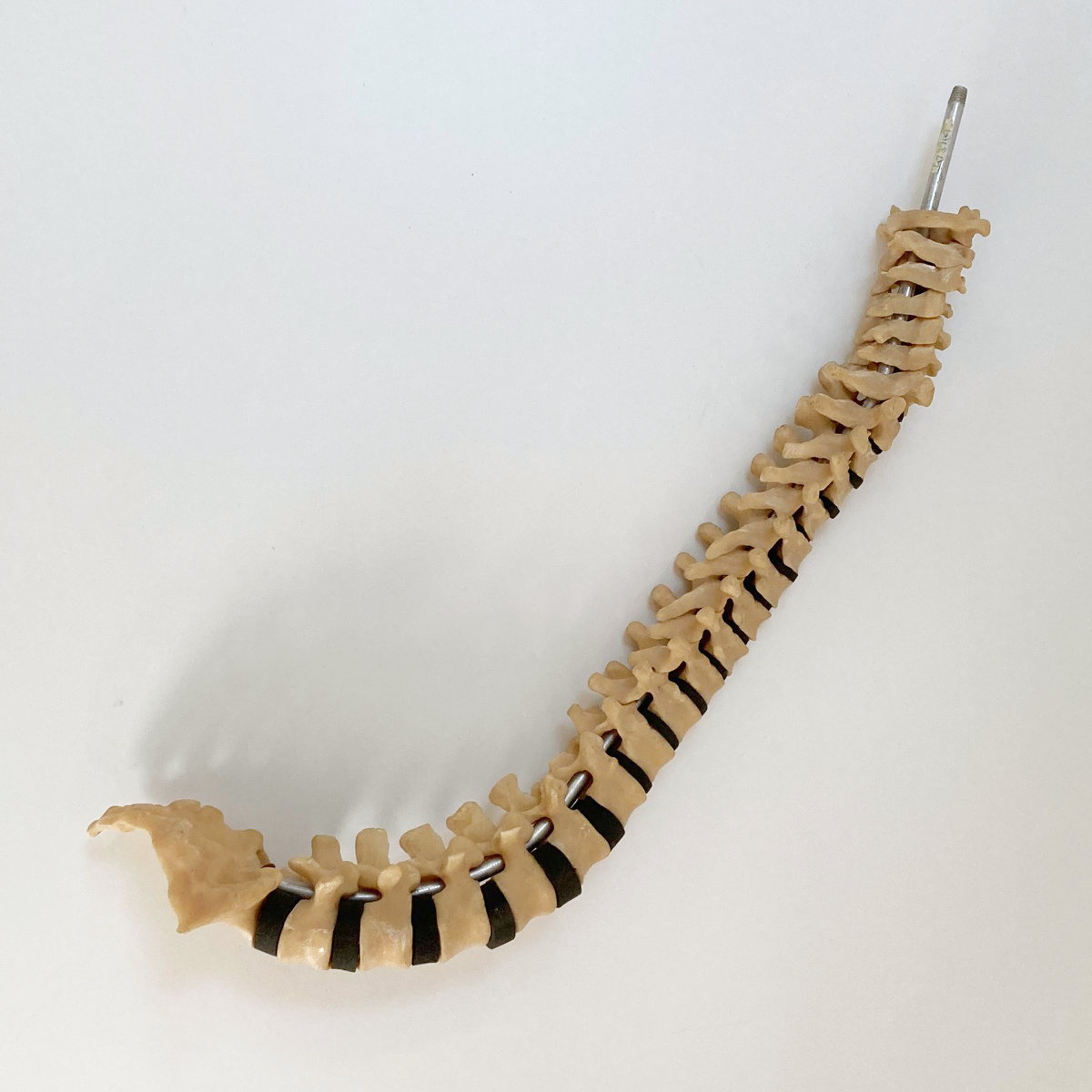 Manufactured entirely from plastic and rubber (the inter-vertebral discs), this model presents an anatomically correct spine which would have been used by schools or medical schools during the middle part of the century.

The spine model is presumably intended to represent the symptoms of someone suffering with Scoliosis from the apparent curvature represented. Scoliosis is a sideways curvature of the spine which is a genetic condition often more prevalent in children and generally requires a brace. However, this model is provided with 24 vertebrae which represent an adult spine with the condition.

This complete model runs from the cervical, the thoracic and lumber sections of the spine and with the Sacrum at the base. Each vertebrae is moulded from bone-like plastic with black rubber inter-vertebral discs provided between each. The shape of the spine is created by a steel rod running through the centre of the vertebrae and protrudes through the top. It has a threaded end which is likely to have allowed it to be suspended by means of a screw-on hook.

A very similar model representing a healthy spine with additional nerve endings is provided in ESP’s catalogues of the period. It states:

“The spinal column from occipital to coccyx is life size and produced in E.S.P. bone-like material. The inter-vertebral discs being represented by special rubber pads. The spinal nerves are shown in yellow PVC with the vertebral arteries in red and are extended to show the cervical plexus, brachial plexus, lumbar plexus and sacral plexus.”

Prior to World War II, the only skeletons or human bones used for teaching were largely sourced from the Middle East and given the complexities and ethics involved in that process, The Educational and Scientific Plastics Company quickly became a leading provider of various anatomical models for teaching establishments during the latter half of the Century. Their catalogue also states that they were early providers of the “Breath of Life” resuscitation training models following the adoption of that technique in the early Sixties. The introduction to its catalogue states:

“The company was founded in 1949, at the end of which year it produced the world’s first synthetic skeleton, entirely bone-like in appearance and feel.

In the following year the now well known 26-inch-high miniature skeleton was developed at the request of leading educational authorities for a small size skeleton as a gross anatomy model.

Throughout this period, experiments and developments were proceeding towards the provision of a range of durable anatomical models for classroom use. From all this work, the fine range of ESP flexible rubber models has resulted. All organs of the human body, both life-size and enlarged, finely painted to emphasise the important anatomical features, are now produced.”

As stated, the company was formed in 1949 and seems to have flourished for next twenty years. I suspect the rise of cheaper and more varied competition was the main reason for their failure and it closed during the mid-Eighties. The company were based in Surrey throughout and most of their later catalogues state an address in Redhill Surrey.