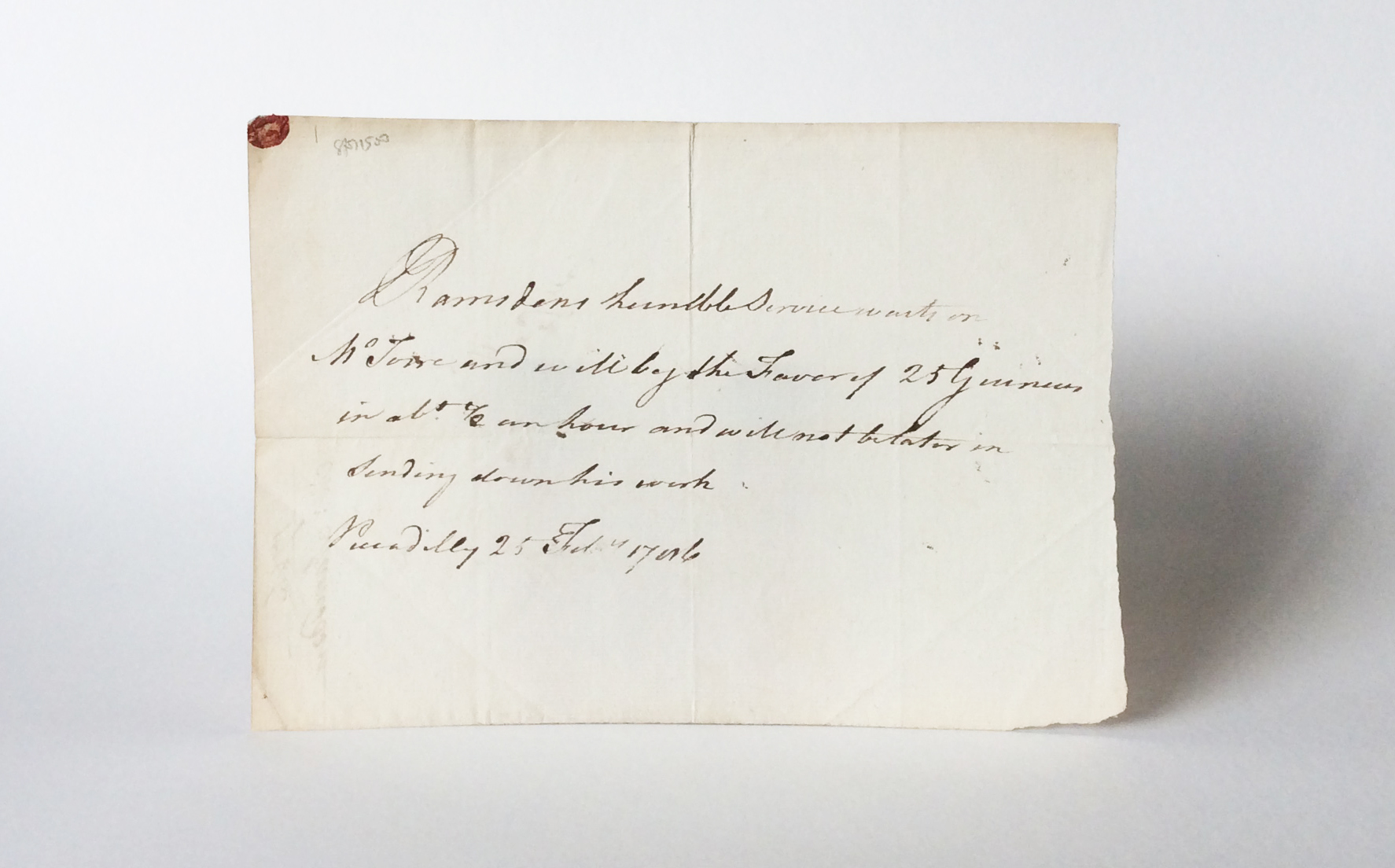 Ramsden supplies work and asks for urgent payment: the first known connection between Ramsden and the Torre dynasty

Scarce and important note in the hand – and with the signature – of Jesse Ramsden (1735–1800), the premier instrument maker of his day. The note is addressed to ‘Mr Torre’, who must (owing to the date) be the optician Anthony Torre, based – just to the south of Ramsden’s Piccadilly workshop – on or near Pall Mall.*

The note is clearly a matter of some urgency. Ramsden requests payment of 25 Guineas – equivalent to upwards of £2,000 today – and claims he will deliver his ‘work’ within half an hour. This raises a number of points of historical interest: first, was Ramsden supplying parts to Torre? This is certainly possible but as this is the first known connection between Ramsden and Torre the question has not been explored. Second, is this another glimpse of the knife-edge Ramsden being pushed to complete his work at the last possible minute? The note is one a single sheet, folded in at the corners and sealed to make an impromptu self-envelope. Clearly this was hand delivered by one of Ramsden’s assistants, either to Torre, waiting at his door, or to Torre’s nearby workshop.

Ramsden is well known as the premier instrument maker of his generation. He is famed for his astronomical and surveying instruments, and particularly the accuracy of his divided scales, for which he invented a dividing machine in the 1770s. He is one of the few instrument makers subject to full biographical treatment, in Anita McConnell’s masterful 2007 work. As McConnell acknowledges, there are very few extant documents relating directly to Ramsden’s life and work. There are no personal papers or business papers. Instead McConnell’s biography draws on the extensive evidence surviving in his clients’ papers, and on Ramsden’s own published accounts of his works. The only Ramsden manuscript we can locate on the market is the letter offered by Tesseract in 2008 (Catalogue 86, No. 15).

Anthony Torre is less well known but was also an important instrument maker of his day. His father was the Italian-born printer and pyrotechnician Giovanni Battista Torre (d.1780), and in the mid 1780s the younger Torre was in the process of forming a partnership with Paul Colnaghi – a name already known in the Ramsden biography, because Colnaghi was the first owner of the famous portrait of Ramsden. (Many iterations down the line P. & D. Colnaghi still operates, now as a commercial art dealer, to this day; for more on the Torres see the British Museum’s page on the firm: https://www.britishmuseum.org/collection/term/BIOG61348.)

The full transcription of the note is: “Ramsdens [sic] humble service waits on Mº Torre and will beg the favour of 25 Guineas in abt 1/2 an hour and will not be later in sending down his work / Piccadilly 25 Feb 1786”. The ornate ‘R’ of ‘Ramsden’ confirm that this is an autograph note: compare the engraved signature on his instruments, and his own signature (always as simply ‘Ramsden’), on e.g. McConnell p. 28. Very good condition: note presumably written on a fragment cut from a larger sheet, but complete in itself; with original folds making a self-envelope “Mº Torre” and “1786 / Mr Ramsden” on the reverse. Remnants of sealing wax to one corner.

* Torre moved from Market Lane just off Pall Mall, to 132 Pall Mall in 1786, though it is not known when in the year this move took place.