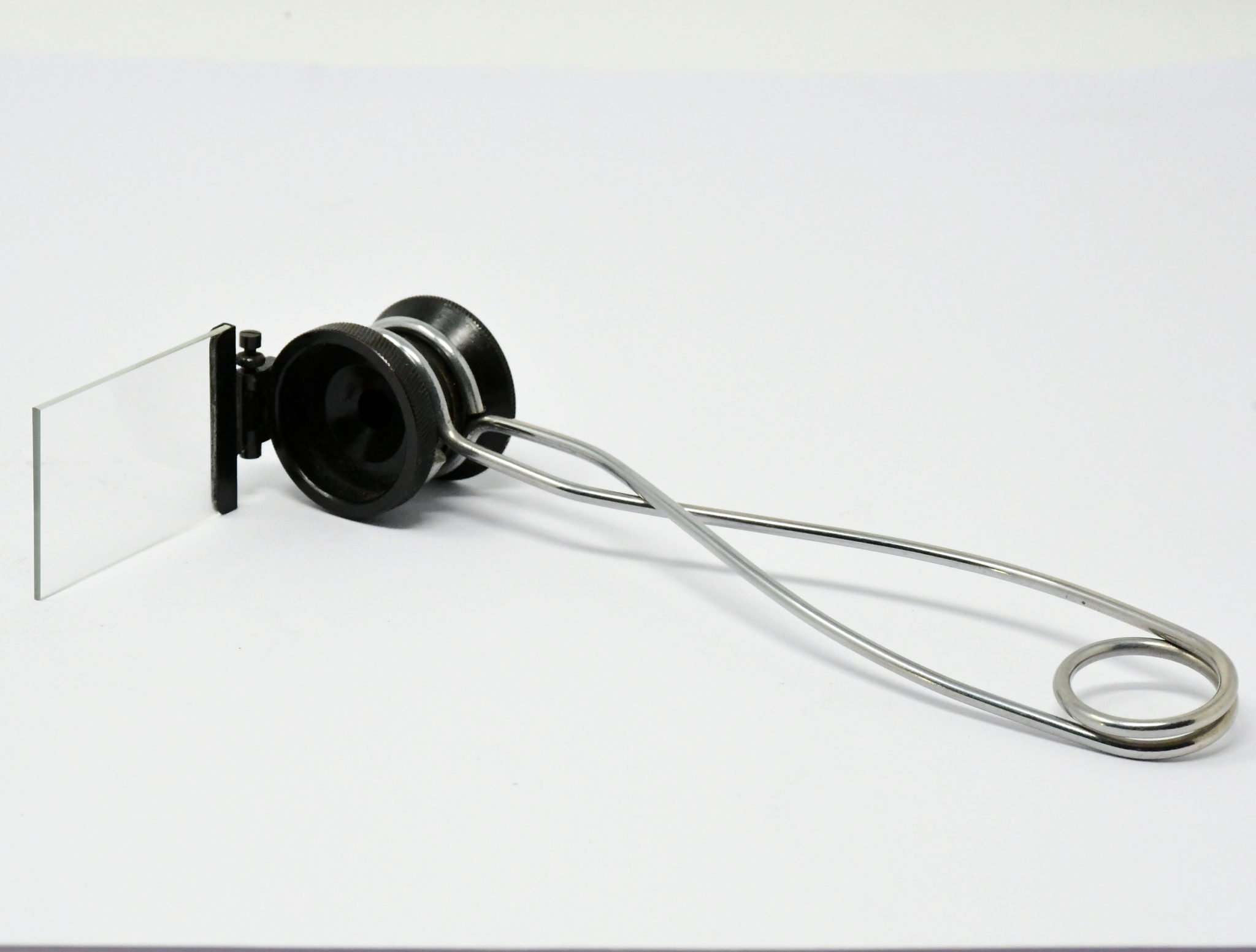 Tourmaline tongs are a primitive polariscope device having a transparent tourmaline crystal thin section or another polarizing medium in each side, mounted in independently rotatable disks at the ends of a pair of spring tongs. Specimens, such as the mineral crystals are slipped between the two tongs and observed by holding the system up to the eye.

This is a unique pair of polarizing tongs some 6″ long, unusual in that one polarizer is a small reflective glass plate that can be set in Brewster’s angle, named after the Scottish physicist, David Brewster (1781-1868), who discovered the law which gives the tangent of this angle as the ratio of the indices of refraction of the two media (the medium on whose surface the light is incident, and the medium through which the light travels to reach that surface). The other medium is a mineral crystal, most likely tourmaline.

Tourmaline is a crystalline boron silicate mineral compounded with elements such as aluminum, iron, magnesium, sodium, lithium, or potassium. Tourmaline crystals are highly birefringent, a crystallographic feature resulting in the split of a ray of light crossing the crystal outside its optical axis into an ordinary and an extraordinary ray, being polarized at right angles to each other. However, the E-ray is rapidly absorbed, so if the crystal is a few millimeters thick, the transmitted light is linearly polarized. Tourmaline tongs are a primitive polariscope device having a transparent tourmaline crystal thin section in each half, mounted in independently rotatable disks at the ends of a pair of spring tongs with the transmission axes at right angles to each other. Mineral crystal specimens mounted in plates are slipped between the two tongs and observed by holding the system up to the eye. These specimens contain each a crystal slice set in a specific vibration axis of its optical indicatrix to yield an interference figure. The device was invented by Jean-Baptiste Biot (1774-1862), as an inexpensive, effective, and easy-to-use polariscope. In 1816, Brewster had devised a simple polariscope in which the object to be examined was held between two plates of a singly refracting crystal (he used agate) placed transversally to one another. This early experimental work in physical optics, mostly concerned with the study of the polarization of light and the birefringence of crystals, were the first steps in creating the field of optical mineralogy.