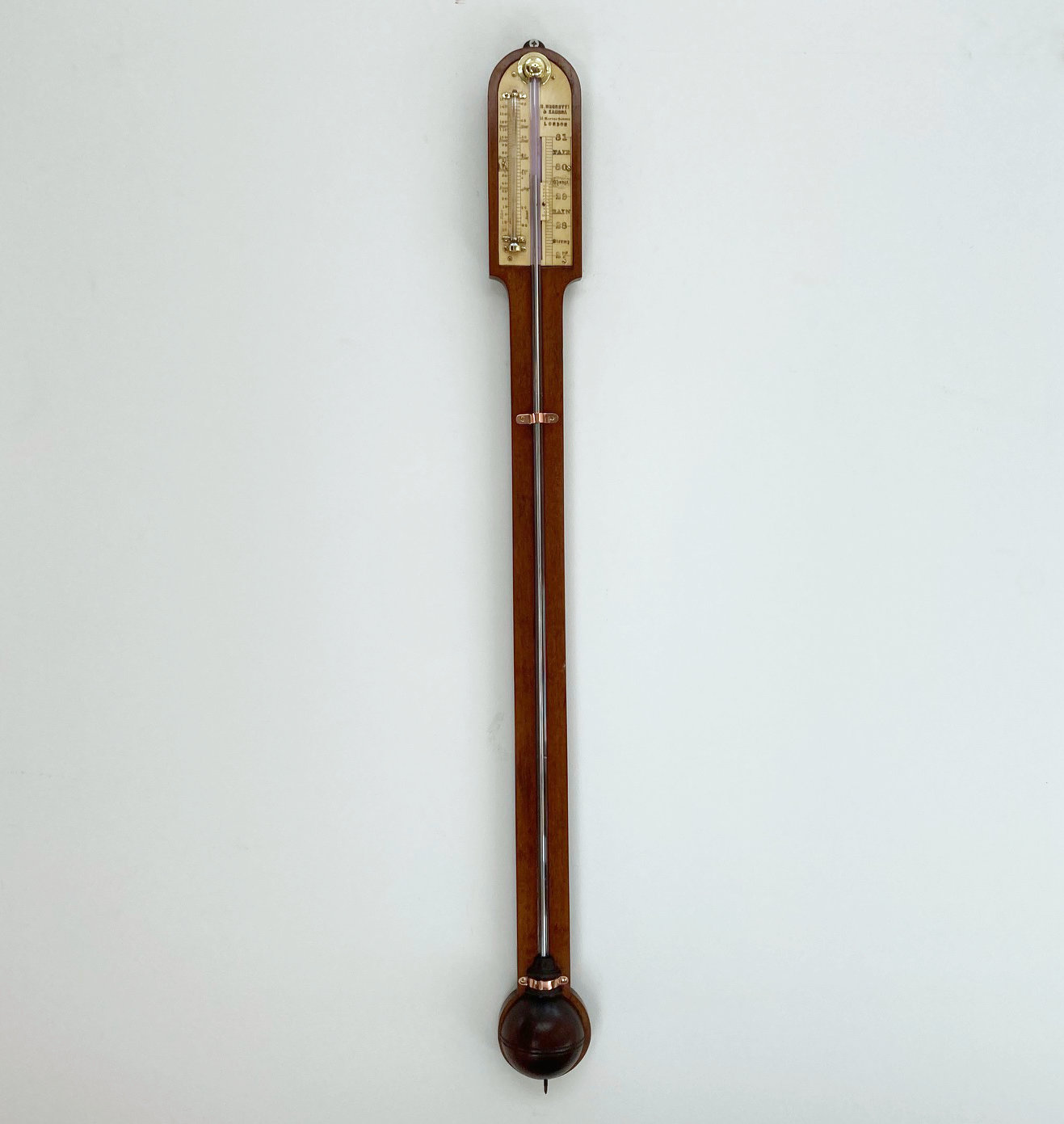 For sale, one of the earliest Negretti & Zambra instruments that I have ever come across. This simple stick barometer is comprised of a single board of mahogany with domed top and inlaid scale plate. The scale is engraved for 27 to 31 inches of barometric pressure with hand operated slide Vernier for more precise readings against the central tube. The right hand side of the scale has an engraved Fahrenheit and Reamur thermometer scale. The top of the glass cane is held against the barometer with a brass dome topped cap.

The glass tube stands proud of body all of the way down to the point where it meets an eighteenth century style globe type cistern cover which is secured at the top by a brass collar at the top.

Perhaps not the grandest of stick barometers on the market but the maker’s engraving to the top reveals that this is an example of Negretti & Zambra’s work from its earliest years of trading. I have seen thousands of their instruments over the years but this is the first I have seen that states:

The partnership of Negretti & Zambra was formed from two Italian émigré families although Henry Negretti was certainly the more experienced of the pair at the formation of the business. His career began as an apprentice under Angelo Tagliabue who also taught Louis Casella. Other Tagliabues also went on to form a partnership with Joseph Zambra so it is clear that this family were instrumental in the formation of both Casella and Negretti & Zambra, the two great instrument makers of the Victorian age.

In 1841 after the death of her husband Valentino, Jane Pizzi took over the premises at Leather Lane from Angelo Tagliabue and continued her husband’s scientific instrument making business. Between 1841 and 1845, the records suggest that Pizzi continued to employ Henry Negretti who had by this time become an adept glass blower, barometer and thermometer maker, and then shortly after, went into partnership with him until 1845 whereafter Negretti took over the premises as H. Negretti & Co.

It is unclear why the partnership was formed in 1850 but it is certain that it grew from the company of H. Negretti & Co which is the reason why you see the “H. Negretti” stated on the barometer, suggesting that Zambra was the junior partner at this early stage. The address is also the earliest trading address that the partnership maintained from 1850 – 1857 so we can be absolutely certain that this barometer was manufactured during this period. I have seen one other piece with this address which simply states, “Negretti & Zambra” giving me comfort in attributing this piece to their first or second year of trading.

Negretti & Zambra went on to be a leading name in the production of meteorological and scientific instruments. Their early affiliation with Admiral Fitzroy and his developments in meteorology and with the RNLI made them a household name within the British Isles. Throughout their long and esteemed history they exhibited at all British and worldwide industrial fairs and became makers to both Queen Victoria and Edward VII and their contributions to scientific development in the second half of the Nineteenth Century cannot be underestimated.

They continued to service the general public and the scientific community alike until the late 1960’s whereafter they focused solely on the aviation industry in numerous guises until its eventual liquidation in the year 2000. A sad end to a hundred and fifty years of quality manufacturing.