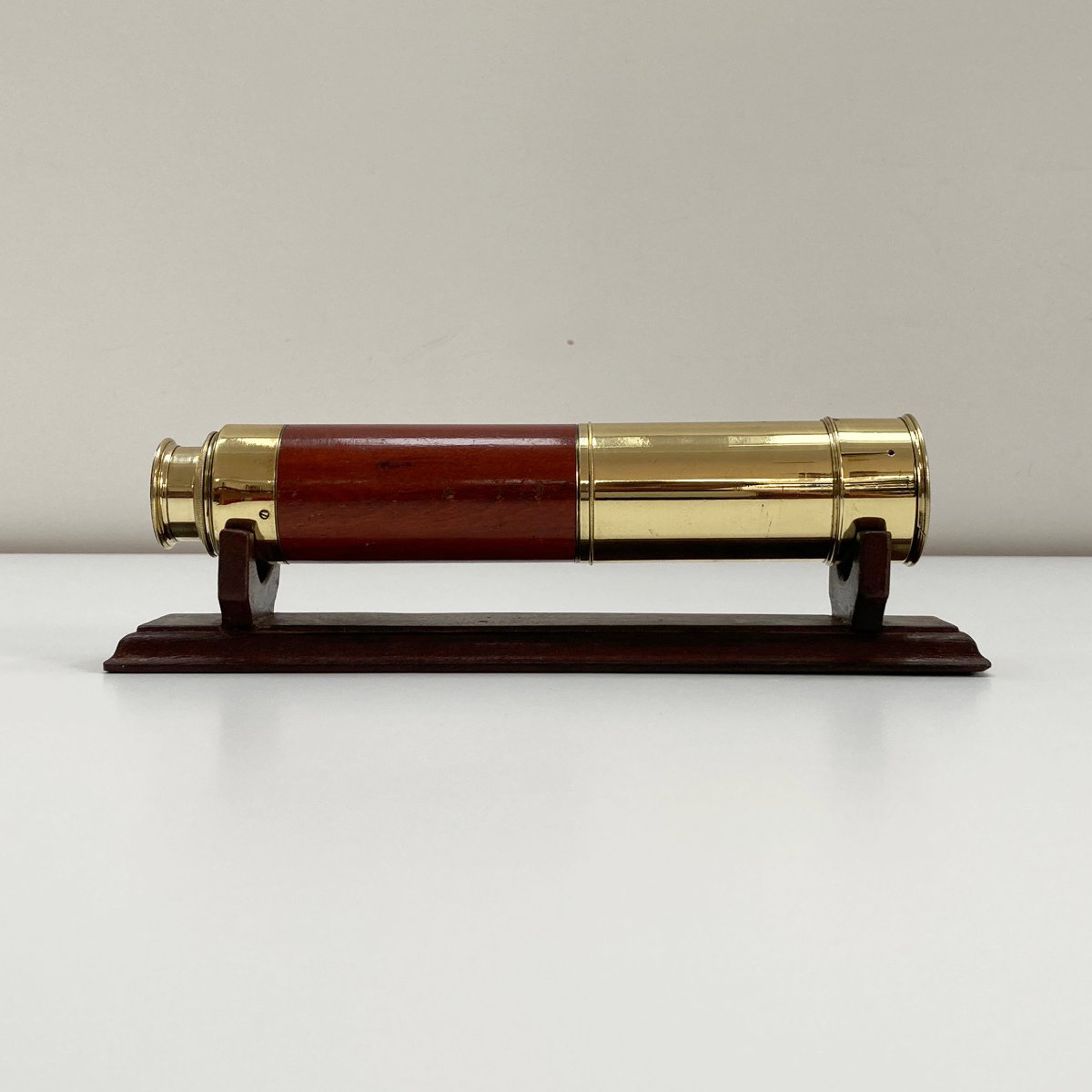 This fine telescope is comprised of a mahogany barrel with large extending sunshade and dustcap to the objective end and dustslide at the eyetube. The telescope measures, 78.5cms fully extended, 25cms closed and has an objective lens with a one and a half inch diameter.

The first draw is engraved with the following:

“Presented to the National Anti Corn Law Bazaar by JP Cutts & Sons, Opticians to Her Majesty. Sheffield – May 1845.”

A highly unusual inscription for a telescope, the Anti Corn Law league was founded in 1839 as a result of The British Government’s decision to set up a sliding scale of duties on foreign wheat. Known as the Corn Law of 1828, it was introduced at a time of high unemployment which was also coupled with poor harvests in the UK. This protectionist policy resulted in wildly fluctuating food prices and was seen by many of the population as a means of protecting large and wealthy landowners.

The result was a wave of civil unrest in the lower classes and the Anti-Corn Law League was formed to professionally organise this protest and put pressure on the UK Government. This explanation does not quite provide the reason why a prosperous company such as JP Cutts would support this newly formed organisation but the backlash for this rash decision also led to other countries levying similar taxes and duties on UK exports. This resulting factor would certainly have had adverse affects on a wider community of business owners outside of the agricultural sectors who were competing to sell their products to a large overseas market.

The league were a highly organised movement using strikes and large scale public meetings to add weight to their cause, with bases in London and the important industrial city of Manchester, support grew to such an extent that there were no buildings large enough to house all of those that wished to attend and in 1842, the league organised the first of two grand “free trade” bazaars intended to raise funds, create mass publicity and also to cement support through industry. The initial success of the Manchester event led to the organisation of a similar but larger event at The Covent Garden Theatre, London in 1845. This exhibition was by no means on the scale of the Great Exhibition of 1851 but it is now sited as the precursor for what would later become one of the most recognisable events of the Victorian era, itself sparking numerous industrial exhibitions across the globe. Prince Albert is also known to have donated a sketch for presentation and sale at the Bazaar, a somewhat subversive gesture for a member of The Royal Family but shows that he was paying more than a passing interest at the event’s success.

The League’s newspapers of this period are peppered with letters published from contributing companies and individuals to the bazaar and a wide range of products were seemingly flooding in for presentation and sale at the event. From reading these articles it is clear that the bazaars were not comprised of individual exhibitors but instead, contributor’s products were represented by the League’s members. The “presented to” wording on the telescope inscription therefore becomes clear.

One such contributor of its products writes its reasons for contributing:

In the earnest hope that commerce will be speedily freed from the unjust (and therefore, unwise) restrictions that a selfish and shortsighted policy has imposed.”

The London bazaar opened in early May of 1845 and it was widely publicised through newspapers of the period. A long article from The Weekly Chronicle provides some insight from an observer.

“On Thursday at 12 o clock, the Great League Bazaar held in Covent Garden Theatre, threw open its doors for the first time, and we, in common with many thousand other, wended our way thither, to see in what manner “The Great Feat” would acquit itself in its gigantic project of Fancy Fair keeping. We had witnessed the preparations at Covent Garden on the Wednesday night, and beheld with a feeling of horror, the state of chaos in which we then left it. It seemed a moral impossibility that such a mass of packages should ever resolve themselves into a state of Bazaarism, and that a fancy fair should grow up out of such unwieldy and impracticable boxes….The ladies laboured we are told, really laboured beside bare-armed mechanics, amidst the chips of carpenters, and amongst the din of hammers, until midnight, and their task was done!”

The article provides a voluminous description of the bazaar and relates that each County, City or London borough was represented with various wares being presented via this method. The organisers had originally intended not to sell anything for the first few days in order to ensure that the contributor’s work was properly exhibited but the sheer volume of contributions meant that on the first day, only a third of the contributions were able to be exhibited due to space issues and therefore sales began in earnest.

The League shrewdly published a Bazaar Gazette throughout the event and one of these provides a flavour of the spectacle that followed.

“The Hall was open on Thursday until ten o’clock, and during the whole time was densely crowded. At nine o’clock in the evening the pressure was so great, that it was feared there would be a necessity for closing the doors. According to the best calculation that we have been able to make, about fifteen hundred can be conveniently admitted per hour, and about two thousand can be accommodated in the Bazaar at one time. As visitors generally average two hours in going round the whole exhibition, we doubt the possibility of admitting more than from eight to nine thousand per day, even if the Hall should be thronged during the whole period of the doors remaining open.”

The Bazaar was by all accounts a resounding success and with a sympathetic population and the support from numerous of the country’s leading industrialist, the Corn Laws were finally abolished in full in 1846. This telescope is a rare example of a donation to the Anti-Corn Law Bazaar and would have been sold at this historic event. A fascinating piece of social history by a very well respected regional instrument maker.

If the company’s advertising is to be believed, JP Cutts was started in 1804 by John Preston Cutts. Cutts was only born in 1787 so it is more likely that this is the date that Cutts completed his apprenticeship with the Sheffield firm of Proctor & Beilby.

By the early 1820’s, business listings confirm that Cutts was trading in Sheffield but seemed to be involved in activities more associated with the town, such as razors and knife making. Seemingly, a shrewd businessman, during the 1830’s Cutts formed a partnership with James Chesterman and began manufacturing and marketing Chesterman’s inventions, namely the spring loaded tape measure and the self-winding window blind but ahead of all the above, his adverts clearly state that he was a, “manufacturer of all kinds of optical, mathematical and philosophical instruments” at their base on Division Street in Sheffield.

The 1840’s saw the incorporation of Sutton’s sons, William and Henry with the name changing to JP Cutts & Sons to reflect the change and certainly by this period according to the inscription of this telescope, the company were supplying the Royal Family. Later during the same decade, John Sutton joined the partnership which then became JP Cutts, Sons & Sutton. These short-lived arrangements culminated in 1849 with Henry Cutts moving to Buenos Aires and William Cutts moving away to operate a separate business. This final move did not invoke a change to the name but it left both JP Cutts and John Sutton as the remaining partners until the early 1850’s when Sutton’s son James joined the business which culminated in the final name change to JP Cutts, Sutton & Son by which time they were advertising an overseas branch in Pearl Street in New York.

By the end of the 1850’s, both Cutts and Sutton had died, leaving the business under the sole ownership of James Sutton and under his stewardship, the company went on to exhibit at the 1862 London Exhibition where they were noted for their, “well made microscope and telescopes”.

The business continued until its dissolution in 1887.