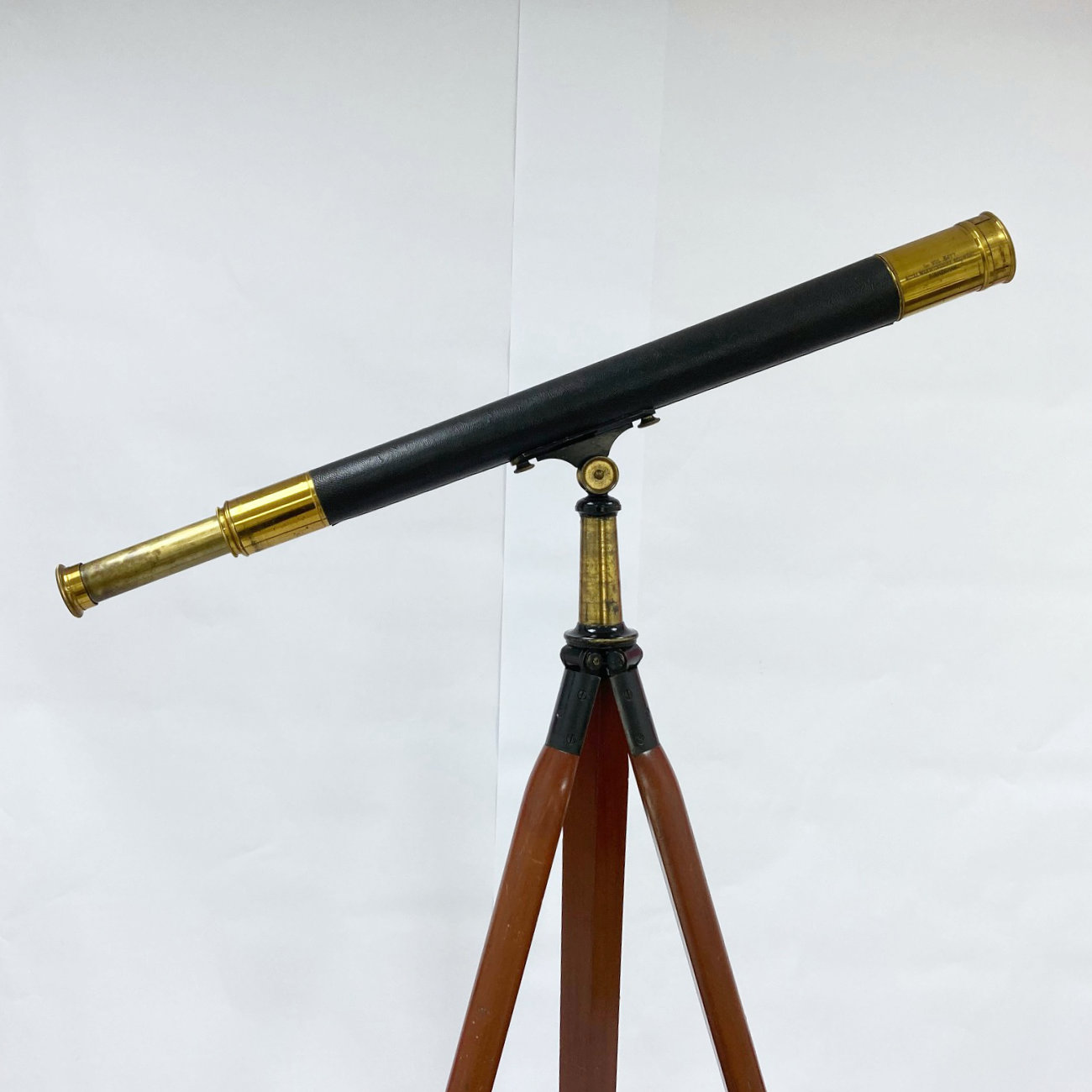 William Gregory of 51 The Strand

For sale, a cased Victorian Military Field Telescope on tripod stand by W. Gregory of The Strand, for the 1st Volunteers Battalion Royal Warwickshire Regiment, Birmingham.

The telescope is comprised of a black leather covered barrel with single draw measuring 80cms when closed and 100cms when fully extended. It has a two and a quarter inch objective lens with original brass dust cap and extendable sunshade collar, which is engraved to the, 1st Vol. Batt. Royal Warwickshire Regiment, Birmingham.

The single draw also has its original dust slide, and a separate adjustable tripod mount is also provided for securing by means of the knurled brass screws on the underside of the telescope barrel. This is also engraved in the same way along the side of the stem. The base of the mount has a large thread to allow it to be attached to a screw at the top of the original accompanying tripod.

Both the mount and the telescope are complete with their original pine black painted and internally fitted packing case with single carry handle and a brass plaque bearing the regiments name. The interior of the lid also maintains its original W. Gregory trade label which outlines his various affiliations to royalty, the military and to rifle clubs throughout the United Kingdom.

As is described in Colonel Charles Joseph Hart’s 1906 published history, The 1st Volunteers Battalion Royal Warwickshire Regiment had a lineage dating back to the formation of the Birmingham Independent Volunteers in 1782 which became the Loyal Association in 1797 and changed again to the Loyal Birmingham Volunteers during the height of the Napoleonic Wars in 1803. The long peace that the aftermath of the Battle of Waterloo afforded, meant the disbanding of many of the British volunteer forces, but in 1852 (presumably in line with prevailing fears relating to the Crimea), the Birmingham Rifle Corps was formed, which later became the 1st Warwickshire Rifle Volunteers in 1860 where it is likely to have been paraded at the inauguration of the National Rifle Association on Wimbledon Common.

The numerous military operations in which the British Army was involved throughout the latter part of the century probably secured the British Volunteer regiment’s longevity although from the official history it seemed to encounter numerous cashflow crises amidst the pomp and circumstance of its regular field practice operations.

During the 1890’s in the lead up to the Boer War, the War Office whilst contributing some budget, also impressed upon the individual County Volunteer forces that the need to equip themselves properly was paramount and according to the records, numerous members of the gentry are noted as having made “subscriptions” to provide for their representative forces. It should perhaps be noted that the British Army had in the decade leading up to this suggestion, been involved in the Zulu War, the First Boer War, the Burmese War and Mahdist War all of which would have caused serious concerns upon its ability to continue to fight with just its existing numbers.

The call to arms finally came in 1899 and the Volunteers were ordered to Budbrooke Barracks in Warwick for training in January of 1900 and they sailed on the SS Doune Castle to South Africa on the 11th of February. The Battalion arrived at Table Bay on the 5th of March where they immediately began operations in support of the regular army.

Throughout that year, the Volunteers witnessed the surrender of both Johannesburg and Pretoria in June but saw much continued fighting around the latter area. By August, the Volunteers became actively engaged with the Boer army where they saw five separate actions. In October, they were given the order to return home although risks posed to supply lines by the Boers, meant that they remained present in operations until April of 1901 after which they departed on the RMS Targus narrowly avoiding a bubonic plague outbreak in Cape Town. Out of 137 men, they incurred 28 dead and injured in just over a year and gained themselves a regimental dog, “Jack” a Manchester Terrier who was also presented with a medal and five clasps.

It seems that the Volunteer Battalions were reorganised very shortly after Colonel Hart’s retirement and in 1908 were largely disbanded and whilst reserve Battalions were revived and played a significant part in the Great War, this telescope was most certainly originally commissioned around the time of the regiment’s Boer War period owing to Gregory’s trading dates.

William Gregory, the maker of this field observation telescope is less well documented in comparison to the regiment for which it was intended. It is likely that he originally took over the 51 Strand business from an instrument maker named, John Pallant who was trained by the Huggins family famed for their involvement in the Dollond business of the early Nineteenth Century. Pallant’s dates at 51 Strand are suggested to have ended in the 1860’s which would chime quite reasonably with Gregory’s early trading period, so it is feasible that he was an apprentice.

Nevertheless, Gregory seems to have gained early ties with the British National Rifle Association which began in 1860 and much like JH Steward who must surely have been a close competitor, sired very close relationships with the military as a result. His relationship with the military is also very well documented by a series of photographs taken by Gregory himself of various regiments in uniform during the final years of Victoria’s reign which are now housed in The National Army Museum Collection.

Newspaper advertisements of 1897 also see him announcing links with The Volunteer League of The British Empire which provides continuing evidence for his supply to organised Battalions such as the Warwickshire’s.

With the 1st Volunteer Battalion being formally raised in 1884 and the death of Gregory in 1904 we can certainly narrow the production date to within a twenty-year period, however it is almost certainly of pre-Boer War manufacture and if included within the Battalion’s inventory, would have been unlikely to have been left at home in reserve during the only conflict in which it was ever asked to take part given its slim budgets.