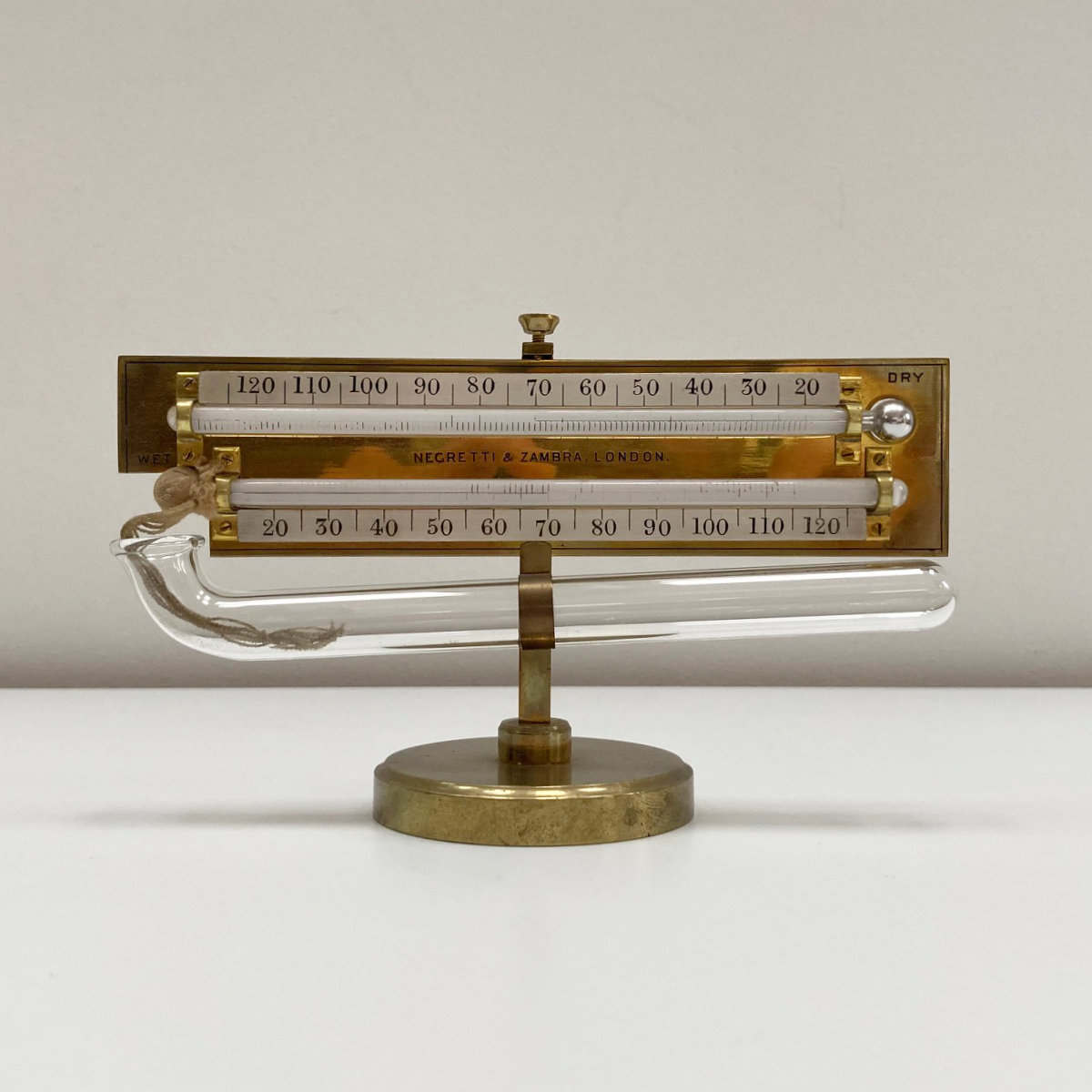 Victorian Mason’s Hygrometer on Stand by Negretti & Zambra of London

Victorian Mason's Hygrometer on Stand by Negretti & Zambra of London

For sale, a Victorian Mason’s Hygrometer or Wet & Dry Thermometer on stand by Negretti & Zambra.

The instrument is comprised of two thermometers affixed by four brass clasps to a rectangular brass plate with two solid brass and silvered scale plates affixed above and below each thermometer respectively. Both have an engraved Fahrenheit scale registering 20 to 120 degrees. The maker’s name of Negretti & Zambra London is engraved to the centre of the backplate with “dry” to the top right and “wet” to the bottom left to denote each thermometer’s use.

The thermometer plate is held against the weighted stand by means of a slotted section for the base and a screw to the top which threads into the top for security. Below the plate a brass ring is provided to hold the original glass water vessel which feeds a consistent supply of water onto the wet thermometer bulb by means of a piece of cloth.

Meteorological instruments such as these have a number of associated names, hygrometer meaning the measurement of moisture or water, the name psychrometer (cold meter) was used by the German inventor Ernst Ferdinand August (1795-1870) and during the same period in 1836, the Surgeon, John Abraham Mason presented his new, Mason’s Hygrometer. An article in the Record of General Science describes a “new hygrometer illustrated by experiments and a comparison of its results with Sir John Leslie’s”. Leslie had in 1805 developed an air thermometer based upon Galileo’s thermoscope. Sadly, Mason’s name is no longer commonly associated with his invention but its continued manufacture is testament to its superior accuracy.

A design very similar to this hygrometer is provided in both the Negretti & Zambra catalogues of the 1870’s and 1880’s and is described as a “Portable Wet & Dry Bulb Hygrometer”. The description states:

“A most compact and convenient form of hygrometer, invented by Negretti & Zambra, as a companion instrument to their small Patent Maximum and Minimum Registering Thermometers and Pocket Aneroid Barometer”.