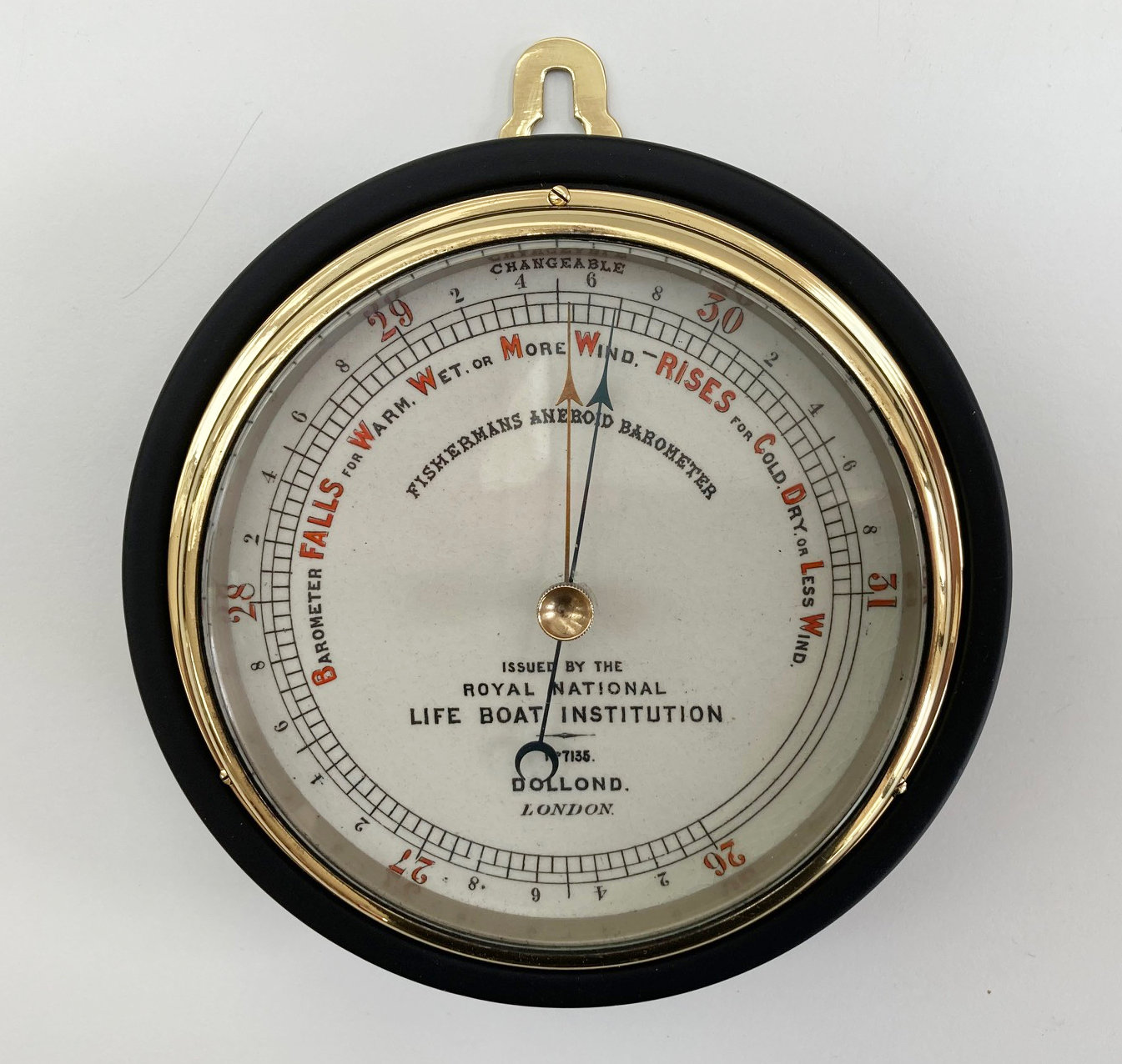 For sale, a late Victorian Fisherman’s Aneroid Barometer by Dollond of London issued by the Royal National Lifeboat Institution (RNLI) – No. 7135.

Both Dollond and Negretti & Zambra were the only suppliers deemed of sufficient quality and standards to produce this design and these barometers were initially supplied by the RNLI and used on fishing vessels towards the end of the century. All examples by either supplier are manufactured with a zinc metal casing and an enamelled five inch dial enclosed behind a brass bezel with thick plate, bevelled edge glass insert.

As early as 1864, Negretti & Zambra were advertising “The Fisherman’s Aneroid Barometer”, their catalogue states,

“No trouble or expense has been spared to obtain a trustworthy instrument at a moderate cost. It is mounted in a stout metal case, with a plate glass covering, the dial is of enamelled metal and five inches diameter. The range of scale is 26 to 31 inches, subdivided into tenths, corresponding with the scale of the mercurial barometer.

It will be noted at the top of the dial is placed the word CHANGEABLE, to the right and left of this word is printed a condensed form of Admiral Fitzroy’s rules for prognosticating the coming weather.

Should the blue index move to the right fine weather may be anticipated; on the contrary, should it recede to the left, bad and stormy weather is indicated.

These movements correspond with those of the mercurial barometer, hence the aneroid, like the mercurial instrument, is said to be rising, falling or steady.”

The moderate cost for one of these barometers at the time was one pound and fifteen shillings.

The Dollond Company was set up in Hatton Garden in 1750 by Peter Dollond with his father John joining him shortly after. John Dollond’s invention of the achromatic lens (although bitterly disputed) led to his award of the Copley Medal by The Royal Society in 1758 and following this success, Dollond moved to The Strand where the company was appointed optician to George III and the Duke of York in 1761.

A great and iconic example of a Victorian aneroid barometer from one of the highest quality makers of scientific instruments during the nineteenth century.