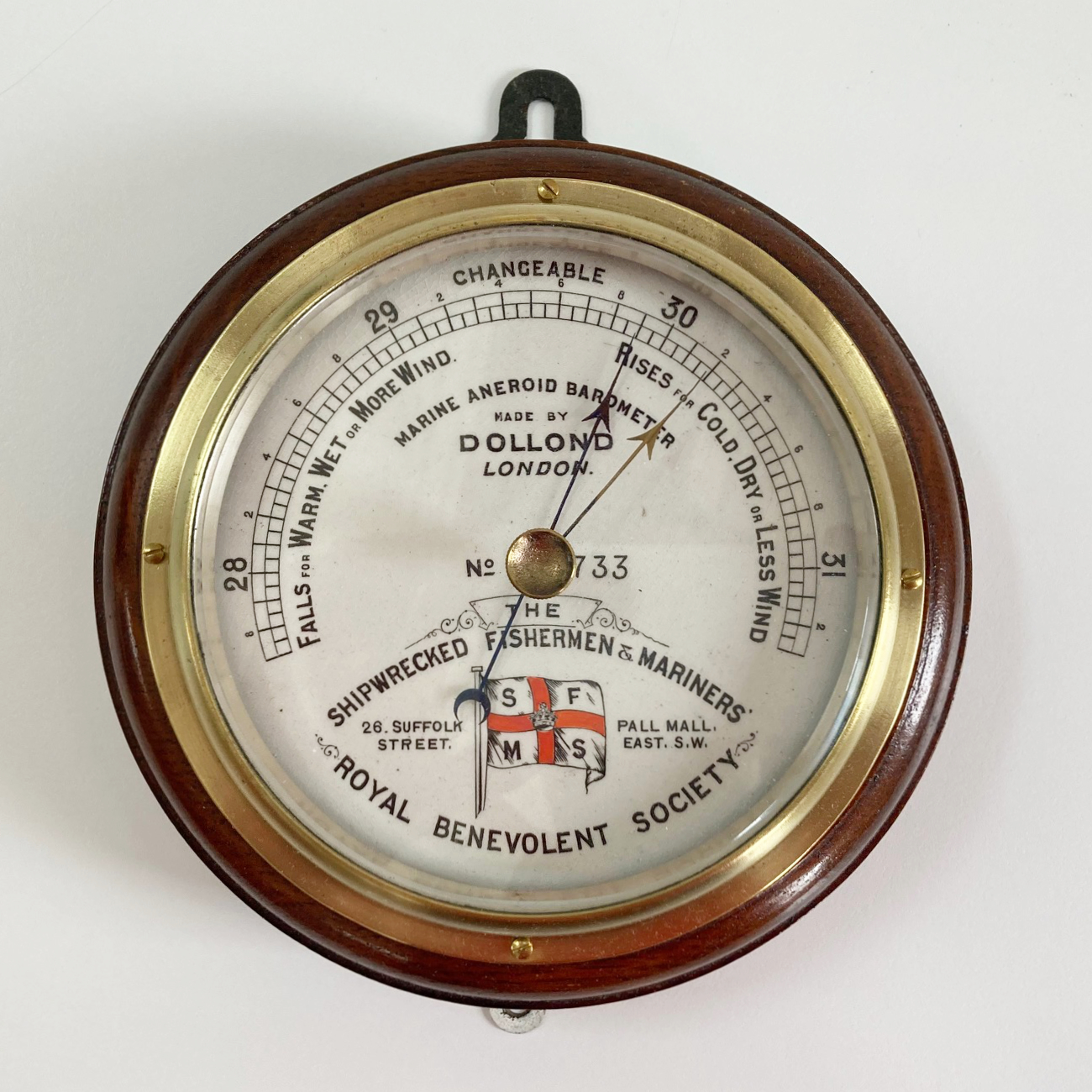 The barometer has a five inch ceramic dial with brass bezel and turned and polished oak case. The painted scale measures 28 to 31 inches of barometric pressure with weather indications below. Painted lettering to the centre of the scale arc states, “Marine Aneroid Barometer Made by Dollond, London” with the serial no: 733 either side of the central spindle holding the blue steel pointer, set knob and brass pointer.

The lower section of the scale is reserved for, “The Shipwrecked Fishermen and Mariner’s Royal Benevolent Society” name with the centre depicting a coloured representation of the Society’s flag. The address is stated either side as, “26 Suffolk Street, Pall Mall, East S.W”

The Shipwrecked Fishermen & Mariner’s Royal Benevolent Society (SFMS) was founded by John Rye in February of 1839 as a response to the tragic loss of a fleet of eleven fishing boats off the North Devon coast the previous year with 21 out of 26 lives lost. It was almost immediately given Royal Patronage by Queen Victoria, an honour which it maintains to the present day.

During the 1850’s it relinquished its lifeboats to the RNLI in order to centralise sea rescue efforts in one place, whilst The SFMS focused on assisting survivors and bereaved families, however it also began its practice for awarding medals for saving life at sea.

Carrying on this tradition, in 1882, Dollond of London gifted one hundred aneroid barometers (with additional donations from The Worshipful Company of Salters) to be presented as rewards or given on loan to fishermen and fishing stations. It should also be remembered that both Dollond and Negretti & Zambra were involved in providing “Fisherman’s Aneroid Barometers” to The RNLI during this period as a result of Admiral Fitzroy’s efforts to provide practical weather instruments to the UK’s fishing fleets.

Due to the greater rarity of these SFMS examples, it should be presumed that the Society stopped awarding barometers after the initial 1882 donation was exhausted but the organisation continues to the present day and provides much needed support to ex-fishermen and merchant seamen. Its efforts are currently patronised by HRH The Princess Royal who presided over their one hundred and seventy fifth Anniversary in 2014.

The company continued its association with royalty and went on to win a Great Exhibition Medal in 1851, a year before George’s death. His nephew (also George) succeeded in the ownership until his death in 1866 wherafter his son William continued to run the business. William was the final Dollond family member to run the company, finally selling out to a former employee of the company, JR Chant in 1871. Chant continued to use the company name until was acquired by James Aitchison in 1927 where after it became Dollond & Aitchison. In 2009 it became part of Boots the Opticians.