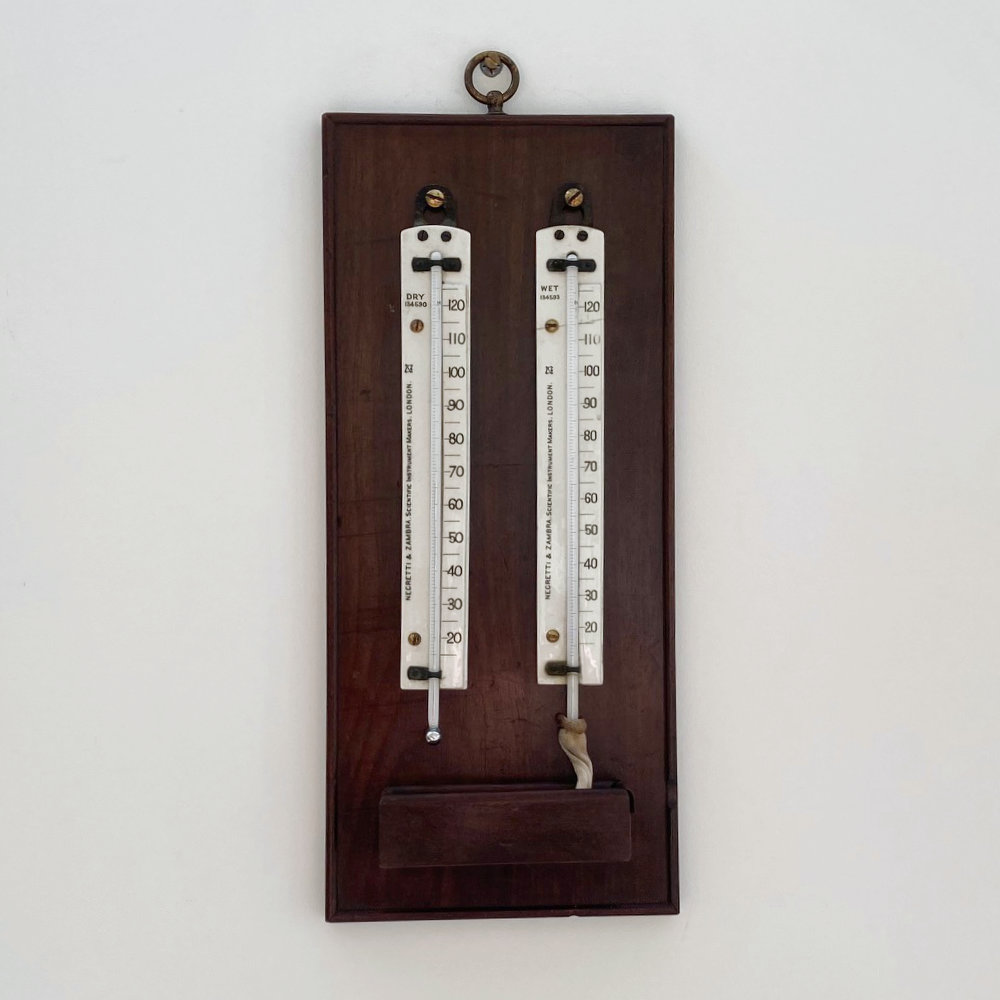 Comprised of a mahogany backboard with brass hanging loop to the top, the board is set with two large brass screws at the top onto which are set two porcelain Fahrenheit thermometer scales measuring from 20 to 120 degrees. To the left-hand side of the scale, both are painted to the makers, Negretti & Zambra, Scientific Instrument Makers, London and with the company’s familiar N&Z logo. They are alternately marked Dry (Serial No: 134590) and Wet (Serial No: 134593).

The wet thermometer is fitted with a piece of muslin tubing which follow down to a zinc lined trough attached to the mahogany board underneath the thermometers into which water would be held to provide a continuous source of water to dampen the wet bulb.

Meteorological instruments such as these have a number of associated names, hygrometer meaning the measurement of moisture or water, the name psychrometer (cold meter) was used by the German inventor Ernst Ferdinand August (1795-1870) and during the same period in 1836, the Surgeon, John Abraham Mason was presenting his new, Mason’s Hygrometer. An article in the Record of General Science describes a “new hygrometer illustrated by experiments and a comparison of its results with Sir John Leslie’s”. Leslie had in 1805 developed an air thermometer based upon Galileo’s thermoscope. Sadly, Mason’s name is no longer commonly associated with his invention but its continued manufacture into the 1840’ and 50’s.

Negretti & Zambra were a leading name in the production of meteorological and scientific instruments. Their early affiliation with Admiral Fitzroy and his developments in meteorology and with the RNLI made them a household name within the British Isles. Throughout their long and esteemed history they exhibited at all British and worldwide industrial fairs and became makers to both Queen Victoria and Edward VII and their contributions to scientific development in the second half of the Nineteenth Century cannot be underestimated.

They continued to service the general public and the scientific community alike until the late 1960’s whereafter they focused solely on the aviation industry in numerous guises until its eventual liquidation in the year 2000. A sad end to a hundred and fifty years of quality manufacturing.

This is a somewhat unusual example of its style although the Negretti & Zambra hygrometer appeared in various forms within all their catalogues through the decades of their existence. It should be noted from the images that the wet thermometer scale has a crack across its width where it has been screwed to the backboard. This is a common complaint caused by movement of the wood and the rigidity of the screws over the years. It is, however, stable and remains perfectly secure.